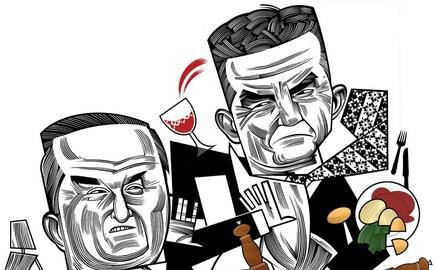 Keith Miller thinks his row with cousin James over shares in the Miller Group can be sorted out over dinner. However, a history of friction between the two suggests it is more likely to end in a food fight.

Keith Miller was sitting at his desk in his company’s plush headquarters on the outskirts of Edinburgh late on Friday afternoon when the telephone rang. It was a Sunday newspaper telling him something he already knew but had kept private: that a group of family shareholders in Miller Group, the business he had run for 13 years, was trying to sell the company from under him.

The whole industry now knows that James Miller, Keith’s cousin and a former chairman of the company, and a group of other family shareholders appointed Ernst & Young (E&Y) to conduct “a strategic review of their options”. This amounted to touting the group’s 60% stake to potential buyers.

“We’d been expecting something like this, to be honest,” says Keith. “It was inevitable it would get out.”

The row had been going on in private for some time. In a series of discussions with Bill Speirs, the chairman of the Miller Group for the past 18 months, James made it plain that an ever-expanding number of family shareholders wanted to monetise their paper assets and exit the business.

Apart from James, the 75 rebel shareholders who constitute the Aligned Shareholder Group (ASG) are second and third generation family members who have never worked in the business.

James would not talk publicly but ASG insists that he is not leading the revolt. “It’s not about personalities,” says an executive from Financial Dynamics, the City PR firm representing the rebels. “It’s just a committee of individual shareholders, all of whom want to unlock their wealth.”

While he is not the official leader of the revolt, few believe it would have erupted if James had not thrown in his lot with the rebels. Insiders say the 73 year old, who with his three daughters and son controls 25% of the company, wants to see the business sold. “It would give a clear outcome to him and his family,” says one senior insider, “but he is not in the position he was 10 years ago to make that call.”

Another said: “His family are not involved in the business and neither are Keith’s three daughters. The family shareholding is becoming increasingly messy as more descendants inherit shares. James just wants to draw a line under it all and allow everyone to move on.”

Keith remains confident that the conflict will be ended soon. “We’ll get this resolved, that’s what families do – maybe around the dinner table,” he says. However, it may not be that easy. The Millers are hardly Scotland’s Borgias but there is clearly a degree of antipathy between the two cousins, which goes back much further than the current row.

Seventeen years ago, Keith, then running the group’s development division, was pushing to become chief executive. James, who was then chairman, passed him over and appointed David Cawthra, a former Balfour Beatty boss. This was the only time in the firm’s history that an outsider had run the business and James justified his decision by claiming his younger cousin was not ready for the job. Four years later, after the company had plunged into the red, Cawthra left and Keith resurrected the business, presiding over 13 years of continually increasing profits to date.

When asked some years later if he was upset about being passed over, Keith said: “The company didn’t do particularly well over those four years. People can draw their own conclusions.”

The shareholding is becoming increasingly messy as descendants inherit shares. James just wants to draw a line under it all and allow everyone to move on

Around that time, James stood down. He said: “Keith doesn’t need me looking over his shoulder any more. No doubt he’s deliriously happy I’m leaving.”

Now Keith refuses to comment on his relationship with his older cousin, only saying: “We have different styles. Others can judge which is the most effective.”

Washing the family’s dirty linen in public is clearly what irks Keith most. The Millers are a close family and they do indeed often dine together. “It’s not a personal thing,” says Keith. “Whatever James is doing, I’m sure it’s for the best motives but ones that are perhaps hard for us to understand. Having all this in the public domain doesn’t help.”

Those close to James say he also regrets that the battle is being fought in public. It is understood that the story was leaked out without his knowledge, because E&Y’s first soundings were not enticing enough.

The Millers are Edinburgh establishment. Sir James Miller, the founder of the business, who died in 1977, started the firm when he took over his father’s architectural practice after leaving George Heriot’s public school. In 1925 he designed and built his first housing scheme and in 1934 James Miller & Partners was established by Sir James and his two brothers John and Lawrence. In a long, illustrious and very lucrative career, Sir James had the unique distinction of serving as Lord Provost of Edinburgh in the fifties and Lord Mayor of London in the sixties.

His son, James, joined the family firm in 1958 after studying at Harrow and Oxford and became chairman when his father resigned in 1970. James’ brother Roger also worked for the firm between 1960 and 1981. James remained chairman until 1999, although for the last few years he worked mostly part time.

Founding of a dynasty

Keith, the son of Sir James’ brother John, joined the group in 1975, after a spell at Wimpey, and became chief executive 19 years later. Keith attended the exclusive Loretto public school in Musselburgh, alma mater to BBC presenter Andrew Marr and chancellor Alistair Darling. His affection for the family firm was, he says, nurtured on site visits each Sunday with his father after the family had been to church.

James and Keith worked together for 24 years, although only the last five were spent with Keith as chief executive. People who have worked with the pair say there was friction between them. Some put it down to a generation gap – there’s a 15 year difference in their ages – others suggest a sibling-like rivalry. Insiders say James was old-fashioned and lacked “modern management techniques”, whereas Keith was open to new ideas and more egalitarian in his outlook.

The contrast between the two cousins is even reflected in their hobbies. James’ pastime is shooting pheasant; Keith is a yachtsman who races his 45ft yacht Crackerjack in competitions.

The cousins live within walking distance from each other in the Murrayfield area of Edinburgh: James in a listed mansion built in 1828; Keith in a Miller home.

The Millers are hardly Scotland’s answer to the Borgias, but there is clearly a degree of antipathy between the two cousins that goes back further than the current row

Shareholder meetings used to be held at James’ home, where family members and their spouses and children learned the year’s dividend, which during Keith’s 13 years as chief executive totalled about £36m.

Despite the payouts, the family were unhappy. The current row started with Keith’s decision not to float the company.

The ASG spokesperson says of its members: “The majority of their wealth is tied up in this company and they want to diversify. They are not criticising the management, but if you look at the way the group’s internal market for trading shares works, it simply isn’t transparent.”

The internal market, created by James, was the company’s way of dealing with demands from the extended family to cash in some of their inheritance. Under the scheme the firm’s merchant bank, Noble Grossart, sets a share price each May based on the group’s earnings and performance relative to its peer group, and shares can be traded internally at that price.

In September the board offered to buy half of the ASG’s shares – 30% of the company – for about £132m. Insiders say this is 20% higher than the price set in the internal market for the year. City estimates value the group at about £1.2bn.

The offer received a cool response from the rebels. The ASG spokesperson said: “It’s only a partial offer. From the ASG’s perspective it may well be worth more to sell the entire stake to someone outside the group. People pay a premium for control of a company, and with 60%, ASG has that.”

Moreover, James and the rebels need 75% shareholder support to sell to an outside investor. Keith effectively controls 36% of the company’s shares with his family’s 25% and about 11% held by employees.

The ASG spokesperson declined to comment on the veto: “We’re aware of it. It was set up some years ago to protect the company at the time, but it’s early days yet.”

Sources close to the group say it wouldn’t go to court to try to overturn the veto. It is unlikely that even the keenest potential bidder wants to get himself embroiled in a messy court case.

That puts the ball firmly in Keith’s court. He is keen to increase employees’ stakes in the firm. Such a strategy will ultimately leave those who are creating the wealth to decide the company’s future once he stands down. At that point, the Miller link with the firm Sir James founded will be over. It will be the end of an era, but will perhaps open a happier chapter for the Miller family.

Berkeley Group enjoyed a drama straight out of Shakespeare in 2003, when young pretender Tony Pidgley Jr launched an audacious £1bn bid to take over his father’s kingdom – despite only cobbling together a fraction of the £1.25bn purchase price. The coup collapsed within days, and Pidgley Sr seemed to take it in his stride: his son was “just ambitious” he said.

Family members at Shepherd Construction had a public falling out in 2002, after former chairman Paul Shepherd issued a High Court writ and began an employment tribunal claim against the company. The board had asked him to resign after the £350m construction division made a £2m loss and racked up £19m of exceptional charges. The writ was quietly dropped in 2004.

Distant members of the McAlpine clan contested the rights to the name itself in 2004, when the owners of Alfred McAlpine launched a covert rebranding initiative to drop the “Alfred”. They were surprised when family members at better known Sir Robert McAlpine were a bit upset. Of course, Sir Robert won a court case to prevent Alfred’s board from pursuing their plan, and its execs duly trailed back to the board room to think how best to dispose of the 42,000 discarded logos from their £400,000 rebranding exercise.