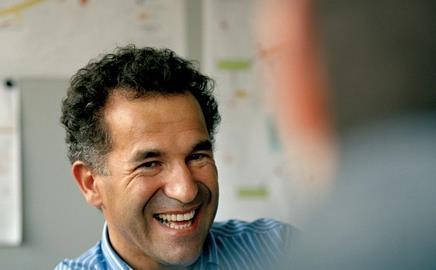 As the 10th anniversary of the French company’s entry into the UK approaches, its managing director tells Mark Leftly about his plans to expand all over the country

If Pascal Minault wants to avoid being stereotyped, he fails instantly: the Pyrenees-born 43-year-old ensures that freshly baked croissants are served during this interview. Made on site – he is sitting in the offices of a south-east London school project – the pastries are unquestionably several leagues above the usual canteen fare. It’s all très français.

Minault is the managing director of the UK arm of French giant Bouygues, which has a worldwide turnover of £11.3bn. This autumn marks the 10th anniversary of the contractor’s entry into the UK market. While it was widely predicted to become one of the pre-eminent players in the UK industry, the company has so far only finished 12 projects.

But that, it seems, is about to change. Minault has big plans: he wants turnover to double to £200m in the next three years. And that is if the company grows organically. He also confirms that Bouygues hopes to buy a regional contractor with a £100-200m turnover by the end of the year, and it later emerges that the company is manoeuvring to buy the Portsmouth company Warings. He then hopes to buy more regional firms, replicating in the UK the way Bouygues grew out of Paris in the 20th century.

As Minault has already played into Building’s hands with the croissant cliché, there is only one way to describe his plans: it will be a French revolution in British construction.

This site is part of the £60m Lewisham schools contract. A quick glance at the senior staff lists for all these projects shows how powerful the French influence is at its UK arm. At Forest Hill school, for example, eight of the 10 senior names are French, and English staff are encouraged to master the language in weekly lessons.

But the company is keen to learn from the UK as well. Minault, who has been at the helm for five years, says the company’s focus on Britain’s PFI market has helped it get work in France: “We see PFI as a procurement group best suited to the capabilities of Bouygues, with our project finance and strong balance sheet,” he says. “The French PPP market has been going a couple of years, so three or four years ago we had interesting visits from French colleagues. It was an experience transfer.”

The biggest UK PFI project Bouygues has won so far is the £311m Home Office headquarters in Marsham Street, central London, completed in 2004. This project caused its turnover to peak at £164m, meaning subsequent results in the region of £100m have looked disappointing.

Part of the problem, says Minault, was the moratorium on PFI hospital schemes begun at the end of 2005 after Whitehall took fright at rising construction costs. This has meant that financial close has been delayed on two hospitals at which it is the preferred bidder – the £120m Broomfield scheme in Essex and a £111m facility in north Middlesex.

Minault says that these should finally be signed later this year. It will be good for the Department of Health (DoH) to hear that there is still a significant player in the PFI market, which has contracted in recent years owing to expense of bidding and the risk of losing. And Bouygues has been among the heaviest losers – for instance, when Skanska pipped it to the £1bn St Bartholomew’s and Royal London scheme in 2002.

Unsurprisingly, Minault backs recent proposals to reimburse losing bidders a proportion of their costs, which should start with the £374m Southmead hospital in Bristol this summer. “It is something that we have been advocating with the Treasury for quite some time,” he says. “At some point they are going to need to do this. In France we would expect some refund.”

However, Bouygues does not need any incentives to bid for work. Minault says he is “overinvesting” in bids to meet his ambitious growth targets. He estimates that 100 of the firm’s 300 UK construction staff – Bouygues also has Ecovert, a facilities management arm – are working on bids at any one time.

The most prestigious of these is the 2012 Olympic media centre, where it has teamed up with Hopkins Architects and is on a shortlist of four. Minault admits that if he loses out on this, most of the big Olympic contracts will have been let, so it will miss out on the £9bn-plus extravaganza.

However, he is confident that Bouygues carries a competitive advantage owing to its media experience: “We reviewed other Olympic projects but elected to go for this one. In France Bouygues co-owns TF1 [the country’s main television channel], which owns Eurosport. We have been in intense discussions with people at Eurosport to see just what is wanted from these centres.”

Minault offers quite an insight into his company’s thinking, but does so without fanfare. He is softly spoken and has an air of calm, so that even when he announces jaw-dropping plans, such as that intention to buy a series of regional contractors, it feels like a throwaway line.

Another example comes towards the end of the interview, when he mentions that he has set up a team to review potential niche market sectors. While it is well known that the company is interested in regeneration, as it is currently bidding for a £90m social housing project in Brent, it is quite a revelation that Minault is considering entering the care homes market. This would put it in competition with McCarthy & Stone.

“The review is continuing. By the end of the year we will have finished it and will then see if we will specialise in such and such a market,” he adds matter-of-factly.

UK contractors have waited a decade for Bouygues’ assault on their market. That wait is finally over.

More on Bouygues at www.building.co.uk/archive