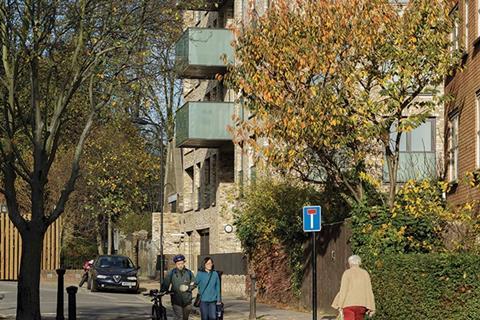 The resident-led Bacton Low Rise development in Camden has not only helped the borough fulfill its housing obligations but seen the rebirth of a 1960s estate that many others may have bulldozed. Establishing a collaborative relationship with residents, the scheme seeks to rectify past mistakes and reconnect the neighbourhood with the surrounding area. The first phase has included 67 new homes of which an impressive 68.6% are for social rent to existing tenants.

Unifying three communities – first-time buyers, Orthodox Jewish families and older people who need extra care – Buccleuch House caters for those on any part of life’s journey. Replacing a 1950s block, the development in Hackney aims to foster a sense of community and equality that benefits all occupants.

Providing a contextually sensitive, sustainable housing development, Cobalt Place also helped cross-fund the delivery of a local school when public funding was withdrawn. The new Saint John Bosco College in Wandsworth now provides 1,000 school places for pupils in the area. The 100 apartments and two townhouses are also complemented by a community house for the Catholic congregation of the Salesians of Don Bosco.

By taking a practical approach to under-used sites, Bell Phillips Architects and the Royal Borough of Greenwich delivered a raft of sought-after homes for the elderly. Spread across eight sites, the 35 homes within the £4.3m project have freed up existing social accommodation while being delivered to the highest architectural standards. A prototype single storey house was developed for alternative layouts.

With an integrative, density driven approach to design, Autor Architecture’s Heath Lodge in west London combines high levels of urban design with space-squeezing housebuilding. The design made a previously unviable site viable by connecting two parallel routes into London. The 29-home scheme varies in size from a minuscule 51m2 for the smallest to 122m2 for the largest abode and achieves 69% affordable housing.

With an aim to create the first zero-carbon homes in Ireland, Choice Housing and PDP London demonstrated how a firm design brief and inspired architecture can add to as well as follow the pre-existing landscape. Centred round the creation of a successful, sustainable community, the 39-home scheme at Killynure Green in Belfast includes individual roofs set to achieve maximum solar power generation as well as high use of thermally efficient materials.

One of the largest developments in the East Midlands, Nottingham One prides itself in being a blind tenure – with affordable and social apartments mixed throughout the scheme. The mammoth project also saw Levitate juggle multiple owners, contractors and the full spectrum of economic conditions to deliver a scheme which is admired by town planners and residents alike and will be the catalyst for further development in the area.

Taking inspiration from the Garden Cities movement, Crest Nicholson’s Tadpole Garden Village in Swindon delivers a unique project founded on the principles of character, lifestyle and legacy. With a strategy to safeguard quality green space and a holistically planned community through the introduction of a community interest company, the scheme has allowed Crest to give power back to the residents.

Bringing the world’s largest co-living building to Old Oak Common is one thing, but delivering high quality architecture in the process makes The Collective’s scheme stand out. The project in north-west London has been designed to the highest quality with communal spaces planned to reflect a range of moods.

After dark, Walthamstow can be a forebidding destination. But working with the council and the Islington and Shoreditch Housing Association (ISHA), housebuilder Hill redefined the local area by delivering a mixed-use scheme which included 121 homes, an Empire Cinema and five new commercial units. The scheme has created over 100 job opportunities for local people.