Set within Oxford’s central conservation area, New College’s Clore Music Studios is a contemporary stone-clad building that provides a range of high-quality performance spaces for the practice and study of music, opera and drama. Consultation between the design team and the stakeholders played a key role in design development. The building sits on a site just 7.5m wide, while another determinant of its final form was the archaeological remains of 17th-century defensive earth ramparts from the English Civil War, to the rear. Glazing to the front and rear of the ground floor provides views through to the ramparts, illuminating historic context while providing active frontage to the street. 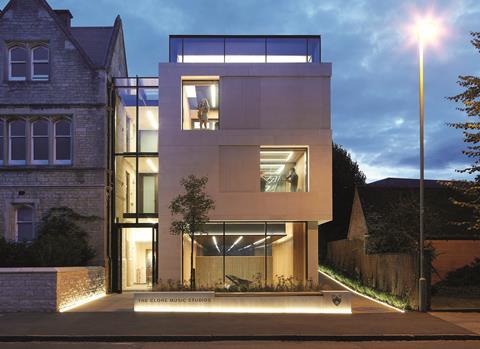 This contemporary 110m² two-bedroom residence occupies a restricted site at the heart of Tottenham, north London. Despite the challenging site and planning constraints – including an awkward plot shape, massing considerations and a neighbour’s rights of light – the design makes efficient use of every inch of the site. The house presents a modest appearance on the street, but an angled front elevation conceals generous living areas, embellished with daylight and greenery views through dual aspect spaces and large skylights. The design also prioritised a passive approach that sought to address environmental issues from the outset, and consequently energy demand is very low.

This Bristol project comprised the replacement of the 1950s toll booths on the Clifton side of the bridge and the 1970s addition to the original toll houses on the Leigh Woods side, along with the refurbishment of the Victorian toll houses on the Leigh Woods approach. Three buildings were demolished and replaced and two listed buildings were refurbished. The challenges included differing ground conditions, live traffic, key events and thousands of daily visitors. Beard developed a programme that carefully planned work for particular times of day or at weekends. Partial or full carriageway closures required to undertake works were identified, and work was carried out at the least disruptive times.

Kaolin Court in south-east London is a small development of four houses, three flats and two live/work maisonettes set around a shared courtyard garden, designed to nurture a sense of community among the residents and integrate them into the neighbourhood. The scheme features dramatic gestures such as the bridge link hovering within a four-storey cut in the building line, cantilevered overhangs and acute-angled roof forms in the loft spaces. Design decisions were made with the view of adding value within the client’s strict budget, and Stolon worked to identify appropriate suppliers and subcontractors; smooth collaboration between design team and contractor was the key.

The Royal Hallamshire is a key healthcare facility in Sheffield, with around 6,000 staff overseeing the care of a range of outpatients along with more than 850 inpatients; NG Bailey was contracted to deliver four new operating theatres for the hospital. It was paramount that building works were carried out with minimal disruption to the daily requirements of the surrounding live hospital site, so the contractor operated flexibly in order to ensure this. BIM was a key innovation that was used throughout the project from start to finish, in order to deliver the best value for the client, and the project took less than 12 months to deliver.