Buoyed by its reputation for placemaking, British Land has what it believes to be the largest commercial development programme in the UK. The developer’s three key projects are 1 Finsbury Avenue, 100 Liverpool Street and 1 Triton Square (pictured), where it says it is leading the way on sustainability by using pioneering techniques for retrofitting and reuse. Its development pipeline is 90% pre-let.

British Land has secured full planning consent for its Canada Water masterplan in London’s Docklands area, which has 2 million ft² of commercial space and 3,000 homes, 35% of which will be affordable. The firm’s near-term pipeline comprises more than 1.5 million ft², including Norton Folgate, where it has consent for a 336,000 ft² scheme, comprising 257,000 ft² of office space alongside retail and residential space, while at 1 Broadgate it has consent for a 538,000 ft² office-led scheme. British Land has an ambitious net zero strategy and unlike some developers pushed ahead with schemes despite covid, putting in place effective protocols to ensure the safety of staff and stakeholders. 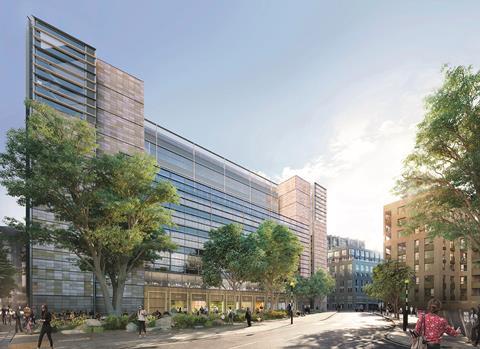 The LLDC is responsible for delivering the legacy promise made in the original London 2012 Olympic bid to ensure the Games’ physical legacy. This involves the long-term planning, development, management and maintenance of the former Olympic Park – now Queen Elizabeth Olympic Park – in east London, and its impact on the surrounding area in the wake of the 2012 Games.

The LLDC has overseen a surge in activity on and around the park, with thousands of zero carbon homes planned, as well as offices for the BBC and sites for the V&A East museum, Sadler’s Wells dance theatre and a campus for UAL’s London College of Fashion, which make up part of a £1bn cultural building programme along the nearby Stratford Waterfront. The LLDC’s 10-year plan for the area includes creating 13,000 new jobs, building two schools, and ensuring that local people benefit from and contribute to the success of the park, through economic opportunity, community engagement, sports participation and cultural participation.

Having seen its city-centre population balloon over the past decade, Manchester has pushed ahead with large-scale regeneration. The city’s ambition can be seen in the £1.4bn Mayfield regeneration programme, a joint venture between the city council, Transport for Greater Manchester, U+I and developer LCR, which aims to turn a brownfield site in the heart of the city into a new neighbourhood that will include office space for 13,000 jobs, 1,500 homes, retail and leisure space, a hotel and 13 acres of park.

Other large-scale developments include Manchester university ’s £2bn, 3.5 million ft2 mixed-use innovation district, ID Manchester, and ex-footballers Gary Neville and Ryan Giggs’ 40-storey mixed-use St Michael’s tower. The council in recent months has considered over £1bn worth of schemes, including a second, £350m arena in east Manchester and 634 homes as part of the Northern Gateway project on the northern edge of the city centre. The council has set itself the overall target of delivering 32,000 homes by 2025, as well as attracting investment to incubate future economic growth.

Unable to find a developer model suited to its aim of building homes for its staff, the University of Cambridge established North West Cambridge Development to deliver 3,000 new homes on a 150ha site to the north-west of the city. Half the homes will be for private sale, while the remainder are to be offered as affordable housing for university staff. A further 2,000 bedspaces are planned for postgraduate students as well as 100,000m² of research facilities.

Full completion is not expected until the end of the next decade but phase one, which includes around 700 homes and is named Eddington, has already been completed. The finished affordable housing was designed by Maccreanor Lavington and Witherford Watson Mann, while other architects working on the scheme have included Wilkinson Eyre, Stanton Williams and R H Partnership, who are responsible for Eddington’s affordable housing blocks. Eddington also features the University of Cambridge Primary School, a nursery, a supermarket and other shops, sports facilities, open spaces and a community events and performing arts centre. Two subsequent phases will be rolled out in the coming years.