Carbon Neutral Laboratory: Out of the ashes

Catastrophe struck the construction of GlaxoSmithKline’s Carbon Neutral Laboratory for Sustainable Chemistry when, at nearly two-thirds complete, it was burnt to the ground. Ike Ijeh discovers how the project team rallied to produce a highly energy efficient building that is even better than the original 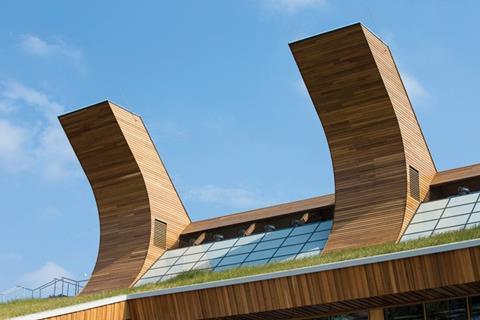 A joint venture between the University of Nottingham and UK pharmaceuticals giant GlaxoSmithKline has recently resulted in the opening of the first carbon neutral chemical research laboratory in the world. Or at least it will be carbon neutral in 25 years once the excess energy it has created can “pay back” the carbon used to create it.

The £16m GlaxoSmithKline Carbon Neutral Laboratory for Sustainable Chemistry in Nottingham is part of an elite group of buildings on course to secure both LEED “platinum” and BREEAM “outstanding” ratings. Unusually for a scientific laboratory it has been constructed almost entirely from timber with fixtures such as timber-clad cable trays interspersed among the glulam frame and cross laminated timber used as walls and floor bracing elements.

But this is a building remarkable as much for its construction as its completion. For in September 2013, when up to two-thirds of the build was already complete, a fire started by an electrical fault burned the entire site to the ground.

“There’s no doubt it was devastating,” recalls professor of chemistry at the University of Nottingham and laboratory director Peter Licence soberly. “The building had been on site for a year and we had been making great progress and then overnight it was virtually gone.”

However, although undoubtedly catastrophic, the building’s completion proves how successful the design team has been at quite literally rescuing the project from the ashes. Directly after the fire, sympathy poured in from across the world and Licence recalls receiving over 250 letters of support from other colleges. Moreover, rather than stunting the project, Licence reveals that it “galvanised” it and within just six months construction had restarted and the building as completed is virtually unchanged from the original brief. 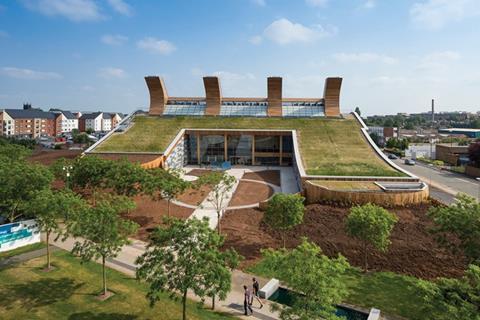 So just what kind of impact does a disastrous event like this have on the day to day workings of a large construction project? Richard Wigginton, head of capital projects at the University of Nottingham, recalls some curious and unexpected consequences.

“It silenced the naysayers and created a real sense of unity and determination across the team which ensured that everyone was committed to seeing the project through on its original brief. It also made the culture of the project less adversarial than is often the case within the construction industry; it created a much more collaborative environment.”

There were a number of practical and procedural changes too, as Nick Hilton, senior project manager at contractor Morgan Sindall explains. “It made us interrogate the design and the design team even more afterwards. We began to challenge subcontractors and the supply chain to see if there was a better or more efficient way of doing things in comparison to how they had been completed before.”

According to Licence, the result of all this is an even better building. “Obviously we would have much rather the fire hadn’t happened, but we believe that all round we’ve created a better building as a result and that it’s a stronger project than it would otherwise have been.”

One practical constructional change introduced to the design after the fire was the roof ridge. Now complete, the building assumes an unmissable and highly distinctive appearance and resembles a giant tepee awning pulled up near its centre to create an asymmetrically pitched two storey profile. The ridge is crowned by a quarter of sculpturally swerving extract chimneys affectionately referred to by the design team as “horns”. 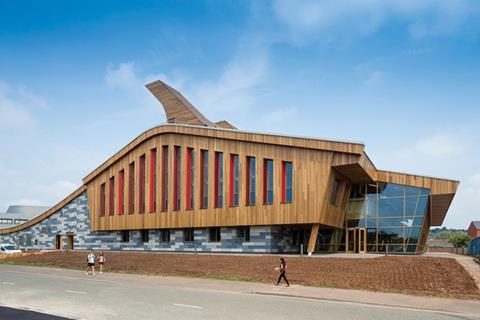 Natural ventilation plays a huge role in the building’s environmental design and contributes to the ground-breaking innovation that sees laboratory fume cupboards sharing fans rather than the conventional practice of allocating a fan per cupboard. It costs a staggering £2,000 to £3,000 a year to run a single fume cupboard and much of this is the result of ventilation extract so the consolidation of fans enabled by the increased utilisation of natural ventilation represents a cost as well as energy saving too.

While the distinctive shape of the building has been partially informed by orientation with its south-facing pitch clad in photovoltaic cells and its north-facing pitch expressed as a sloping green roof, Licence reveals that ventilation plays a huge role in its shape and composition too.

“It works in a similar way to the leading edge of a plane wing. As air moves across the roof, air pressure accelerates and draws on the inclined surface to create a greater amount of wind energy which is then distributed into the building through the ridge. The results can sometimes be quite musical – the air flow through the laboratories is so responsive to outside conditions that when it’s quiet you can practically guess what pervading wind speeds are by listening to the pitch and tone of the extract system.” 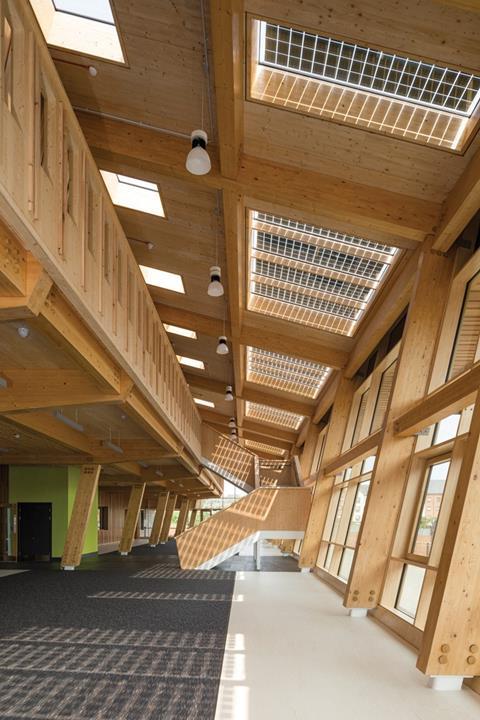 As well as ventilation, another essential concept of the building is that it is used as an experimental test bed that not only facilitates research but informs it, actively encouraging scientists to work in a different way. Licence describes it as “as much a three-dimensional learning tool as it is a research facility”.

Ironically, the fire also provided further unexpected opportunities for learning and evaluation. “We had flames shooting up 30ft into the air through the four extract funnels on the roof. Obviously it was heart-breaking to see but it proved in a dramatic fashion that the fluid dynamics on which the plant design had been based worked and that our calculations were right.”

Accordingly, analysis of the fire has sparked an array of new avenues of research with institutions as varied as the BRE and the local fire department. The degradation of materials in the fire, such as copper, aluminium and molten glass has also proved a key area of research.

One of the more unlikely collaborations came with the university’s fine art department. Almost immediately after the disaster the department descended on the smouldering site for any surrealist inspiration its charred and blackened landscape could afford. The result is an extraordinary series of commemorative art works decorating the finished building. These range from melted relics recovered from the fire, including the warped carcass of an exploded fire extinguisher, to abstract canvases that depict chemical genomes corrupted by ashen backgrounds. 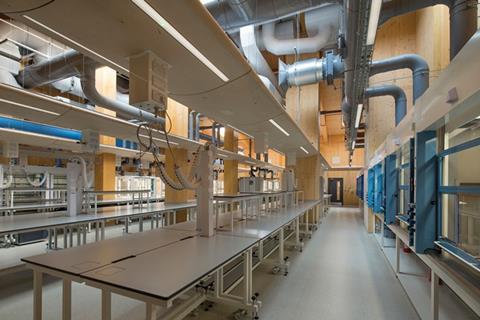 While the team concede that the fire has inevitably “given the building a narrative” they are keen to ensure that the building is not defined solely by that one event. Accordingly it includes an impressive array of environmental innovations. Famously, geodesic engineering pioneer Buckminster Fuller once rhetorically asked protégé Norman Foster how much his building weighed. The query was delivered in an attempt to more precisely define a building’s ecological footprint and in the new GSK building Licence is able to give us a very specific answer. “Approximately 500 tonnes of timber sourced from 100 mature spruce trees that would cover the size of two football pitches.”

However despite the prodigious use of timber, Hilton points out that the material was not installed slavishly but was allocated pragmatically on a case by case basis. “The philosophy was to use as much wood as possible but not to use it everywhere. For instance the cladding is hung on a timber carrier system. But the cladding itself is terracotta rather than wood.”

The terracotta, which has a grey finish, also serves an important contextual and historic role, as Wigginton explains. “The Jubilee campus where the building is situated has seen a number bold and dynamic examples of contemporary architecture starting with original buildings by Hopkins to more recent commissions by Make. These are often defined by zinc or metallic surfaces so the grey terracotta references this.”

The new facility contains a vast array of high-tech scientific equipment including nuclear magnetic resonance machines which cost hundreds of thousands of pounds and are variants of the now commonplace MRI machine used in healthcare which was itself invented at the University of Nottingham. The building provides up to 150 scientists with labs, offices and teaching spaces and also provides accommodation for the renowned Doctoral Training Centre in Sustainable Chemistry. 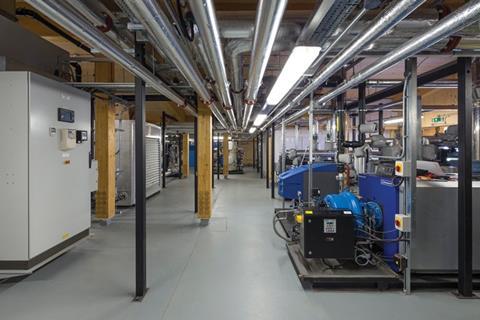 The interiors have two architectural highlights. First a double-height winter garden that extends the full length of its southern facade and whose inclined walls and balcony skewer perspective into an entertaining optical distortion. But most impressive are the upper level laboratories themselves, soaring, lofty spaces that with their exposed pitched roofs and timber finishes defy the sterile aesthetic convention normally applied to labs and instead borrow heavily from the vernacular assembly instincts of barns and churches.

They also provide a fitting summary of a building resolutely committed to reinvention as well as research. For catastrophic as it was, the 2013 fire and the finished building’s successful emergence from it was perhaps the ultimate example of the evolutionary interrogation which lies at the core of the building’s design and concept.