Crossrail: Pulling out all the stops

Crossrail - the biggest engineering project in Europe - also claims to be a driver for multimillion-pound regeneration in the capital. Ike Ijeh takes a look at three key stations along the route and asks how much Londoners will really benefit 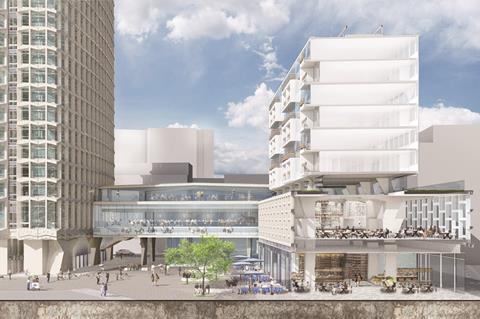 Earlier this month the first new theatre to be built in London’s West End in 30 years was awarded planning permission. The theatre will be part of a major mixed-use complex to be constructed above the new Tottenham Court Road Crossrail/London Underground interchange. It thereby puts into sharp focus, perhaps for the first time, Crossrail’s enormous potential for regenerating swathes of areas along its route.

Crossrail’s transport benefits have already been well documented. When the 73-mile railway completes in 2018, its 37 stations and eight new sub-surface stations will transport an anticipated 200 million commuters across the capital every year and increase its public transport network capacity by 10%. All of which will ease congestion and improve access to and through the capital. Having overtaken London’s Olympic park as the biggest construction project in Europe, the government estimates that, overall, Crossrail will generate benefits worth £42bn to the UK economy.

But what about Crossrail’s regeneration potential? How much of its projected benefits will be enjoyed by the urban environment around its new stations and along its route?

According to Sam Richards, Crossrail’s head of urban integration: “The new Crossrail stations offer great opportunities to improve public areas at street level […] Crossrail delivers a unique opportunity to facilitate and drive wider regeneration at a number of locations.”

Regeneration is certainly in Crossrail’s own interest; it hopes to raise up to £500m of the total £18bn cost of the scheme by maximising development opportunities above its stations. However, some have stated that this regeneration may come at a price. Certain councillors and business people have warned that the Crossrail levy imposed by the mayor of London to partially fund the scheme could harm regeneration prospects elsewhere. And although Crossrail was planned in advance of both Eurostar and HS2, eyebrows have been raised that it offers no direct link with either network (at least not in central London) thus potentially compromising the optimum connectivity that could spur further regeneration.

Additionally, much of Crossrail’s current route through central London already mirrors that of London Underground’s Central Line - it will only deliver a reduction of one minute on the current journey time between Tottenham Court Road and Bond Street stations. Its central section therefore primarily serves affluent enclaves of inner London which already house the capital’s biggest employment centres, such as the City (Liverpool Street/Farringdon Stations), Mayfair (Bond Street Station) and Canary Wharf. Other areas which are in far greater need of regeneration and employment opportunities, such as pockets of Hackney or Battersea, are ignored.
Crossrail 2, or the Chelsea-Hackney Line, may well alleviate some of these shortcomings - if it is ever built. But that construction project is unlikely to start before the completion of HS2, which means it is almost another generation away.

So, in light of all these constraints, just how genuine are Crossrail’s regeneration credentials? We have looked at three key stations along its central section to find out. 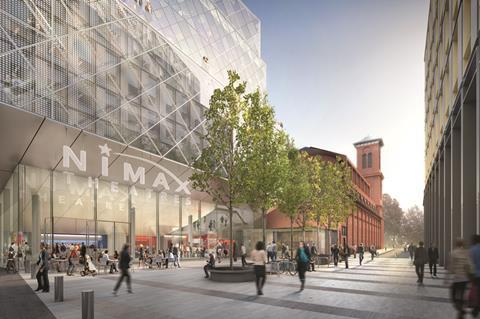 AHMM has designed a 275,000ft2 mixed-use scheme above Tottenham Court Road Station, which includes a new theatre and a pedestrianised link to Soho Square

Tottenham Court Road is probably the biggest station project across the entire Crossrail line. The massive redevelopment will see the size of the existing ticket hall increased by over six times as well as the construction of a new western station ticket hall, four new commercial buildings comprising 500,000ft2 of retail, office and residential space and a brand new 350-seat theatre.

Clearly this scale of development has huge regeneration potential. In the words of John Burns, chief executive at Derwent, who is developing the land above the station, “[Tottenham Court Road Station] will help in the much-needed revitalisation of the eastern end of Oxford Street, which is essential for the long-term growth of the West End.”

Oxford Street’s eastern range has historically been less salubrious than its western end, displaying a dishevelled assortment of souvenir shops and discount fashion outlets rather than the flagship department stores dotted around Oxford Circus and Marble Arch.

Although Crossrail itself provides a chance to level the balance, perhaps the biggest clue to its wider regeneration impact in the area is the level of unrelated local development activity it has provoked. Here the signs are encouraging.

Renzo Piano and Legal & General’s Central St Giles opened in 2010 to a blaze of publicity that one might have expected from the renowned architect’s first UK scheme. Situated just yards from Tottenham Court Road and comprising the West End’s biggest contingent of new office space for years, it was the starting pistol for the regeneration of an area once heavily stigmatised, both commercially and socially. Land Securities is also proceeding with construction of the UK’s second largest Primark store at 18/24 Oxford Street and new developer Almacantar even has plans to convert the iconic Centre Point tower into flats, with retail and public spaces at ground level.

The final ingredient in the rebirth of Tottenham Court Road and the most critical gauge of the extent of Crossrail’s regeneration potential will be the quality of its public realm. Historically this has been woeful and St Giles’ Circus at the junction of Oxford Street, Charing Cross Road and Tottenham Court Road was once central London’s worst pedestrian accident blackspot.

Post-Crossrail, an ambitious new shared surface public square is envisaged here with diagonal crossings akin to Atkins’ heroic re-working of Oxford Circus. This will also be linked to new public spaces underneath and around a converted Centre Point and a pedestrian boulevard linked to Soho Square. If the innate but historically dormant potential of St Giles Circus to be transformed into a dazzling gateway to the West End is finally realised, Crossrail’s regeneration legacy here will be unimpeachable. 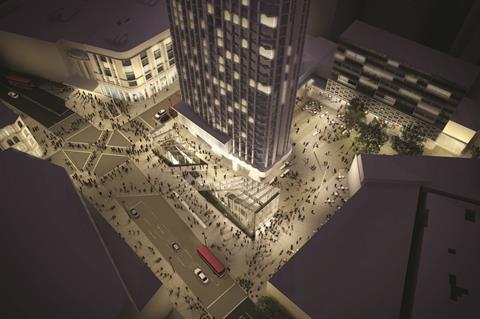 A public plaza will be built at St Giles Circus

When complete, Farringdon will be the only London station with access to Crossrail, tube and Thameslink services. Additionally, it will be London’s only major railway hub with fully integrated north-south and east-west routes. Two new ticket halls - one of which has already been built - will be sited at either of end of the new station, both with new commercial developments above. Cowcross Street outside the west (existing) entrance will be pedestrianised while a new entrance will be constructed adjacent to the south-eastern corner of nearby Smithfield market.

Farringdon is already a well-established employment district with good transport links, popular leisure amenities and a large number of independent businesses, particular within the design and creative industries. Although its proximity to the City, (relatively) competitive rents and abundance of 19th and early 20th century light-industrial warehouse stock triggered a wave of regeneration some 20 years ago, there are still development opportunities in selected areas.

Highly controversial plans to demolish the dilapidated western fringes of Smithfield market have been simmering for years. Much of Farringdon Road itself remains an anonymous canyon of either empty or insipid post-war office blocks, several of which have again stubbornly resisted redevelopment.

Could Crossrail be the trigger that finally ignites regeneration of this kind?Liam Bailey, head of residential research at developer Knight Frank, is convinced that it could be. “It’s a huge catalyst for regeneration,” he maintains. “It has the potential for a very significant impact on the market in the area and unlock ongoing investment.”

Knight Frank has identified Farringdon as one of 11 development “hotspots” across the capital and had estimated that by the time Crossrail opens, it could have helped increase rental values there by up to 52%.

Two sites on the periphery of the neighbourhood may soon provide early evidence of this process in action. The former Guardian newspaper HQ on Farringdon Road is poised for redevelopment, as is the vast Royal Mail Sorting Office at Mount Pleasant, one of the largest undeveloped sites remaining in central London. Plans are being prepared for the 1 million ft conversion of over half of the iconic 12-acre site into 3,000 homes. Martin Gafsen, Royal Mail head of property, identifies Crossrail as key to the site’s revival.

“The new Crossrail station at Farringdon will enhance the area’s appeal significantly, creating one of the best connected neighbourhoods in the capital.” 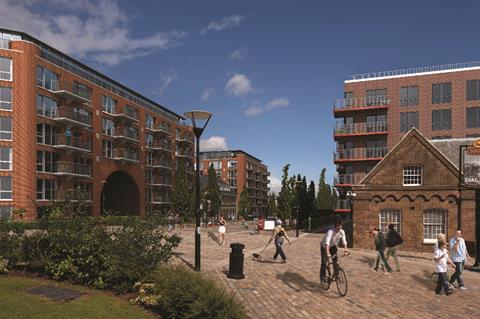 Initially cancelled in 2006, Woolwich Station was a last-minute addition to the Crossrail programme but one that could again prove critical to the network’s regeneration credentials. Woolwich is within the borough of Greenwich but is also one of the most deprived areas of outer London, with relatively high levels of unemployment in certain zones.

However, Greenwich enjoys the longest river frontage of any London borough (13km) and several of its recent regeneration schemes, including the latest Docklands Light Railway extension, have been focused here.

Crossrail is no different and its new station will be part of Berkeley Homes’ massive £750m Royal Arsenal Riverside development. Consequently, Berkeley Homes is part-funding construction of the station “box” which will be fitted out by others at a future date and will eventually - once further funding is secured - be served by Crossrail services.

The Royal Arsenal development is already one of the biggest symbols of Woolwich’s regeneration and is one of the largest regeneration projects in London. A total of 1,700 homes have already been built on the site and another 3,700 are planned in future phases. The former military armaments site is already well served by overground railway services, the DLR and multiple bus routes. So is Crossrail necessary?

According to Greenwich council leader Chris Roberts, it is. “Nothing can cement the regeneration of Woolwich more than the inclusion of a Crossrail station.”
If successful, Woolwich could indeed form a regeneration template for other suburban town centres along the Crossrail route. Although the stations along its central tunnel section have attracted most attention, the majority of the route passes though satellite town centres such as Ealing, Ilford, Romford and Southall within London and the likes of Slough, Maidenhead and Brentwood outside the capital.

These areas do not enjoy the multiple public transport options available in central London and will therefore be even more reliant on the connectivity, investment and employment opportunities Crossrail
could bring.