An ambitious plan to build a cable car over the Thames was up against some seriously tough technical challenges, not to mention the dreaded jinx of the Greenwich peninsula. Building finds out whether they pulled it off. Photography by Tim Crocker 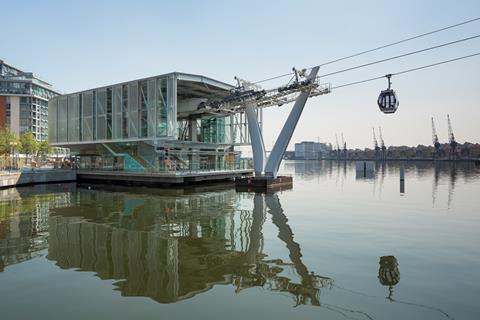 Is the Greenwich peninsula the white elephant capital of the UK? First there was the Millennium Dome, left lying empty for years after the failed exhibition of 2000. Then there was the nearby Greenwich Millennium Village, the grandiose environmental credentials of which were watered down in the face of hard commercial realities. Over a decade later, it still isn’t finished.

And now the jury is out on whether a brave new experiment should be added to the list. The first urban cable car built in the UK will link the former Dome to an empty dock on the opposite side of the Thames when it opens later this year.

On paper, an urban cable car is a brilliant idea. Unlike a road or railway, the only impact at ground level is the support towers. It is energy efficient and quick, being capable of carrying 2,500 people an hour over the river in just five minutes - even though it will operate below maximum speed to give people the chance to enjoy the view.

But building a cable car in London over a 400m-wide river has proven more difficult than building one in the Alps.

“It’s like designing a letter box as here you have to work between an upper and lower constraint,” says Matthew Randall, the operations director of contractor Mace, who describes the job as “like threading a needle”.

“The upper constraint is the planes using London City Airport and the lower constraint is the air draught of the boats using the Thames.”
He adds that the cable car also passes over a busy flyover, a large construction site and the Docklands Light Railway. If that wasn’t enough, the south station even has to have a large cantilever to avoid piling where a future road tunnel might be located. 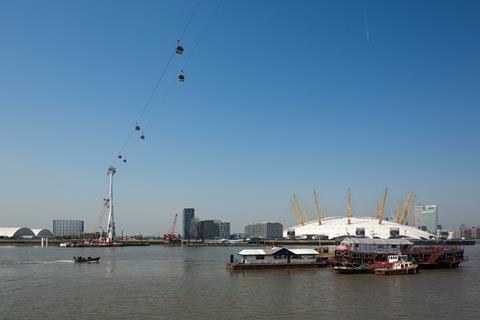 Despite never having built a cable car before, Mace had to deliver this one in double quick time. “As the ink was drying on the contract, we were pouring concrete and putting steel into the ground,” says Randall. The contract was signed on 15 April last year and the project is due for completion this summer. This has had a big impact on how the project has been delivered.

The north station was built on the north side of Royal Victoria Dock. Mace did the piling and the concrete decks, then handed the station over to cable car specialist Doppelmayr so it could install the cable car systems. “The cable car equipment has always been king so we always have to take a back seat to keep the Doppelmayr programme going,” explains Randall. Once Doppelmayr finished their work, Mace could complete the station envelope. 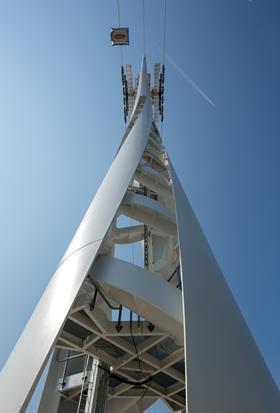 The towers have a distinctive helical design

The cable over the river is supported by two 96m-high towers. A smaller tower is located between each main tower and the north and south station to feed the cable in at the correct angle. Constructing these smaller towers was relatively straightforward. But the main south tower, which is located in the river, was more complex.

The steel towers have been designed by architect Wilkinson Eyre with a helix-shaped ribbon spiralling down each one. The south tower sits on a concrete base which includes a 5m-high concrete skirt incorporating the helix. “The whole architectural integrity of the tower had to be maintained so the ribbon goes all the way down to the mud,” explains Randall, adding that the construction tolerances between the steel and concrete were very precise to maintain the continuity of the helix.

The Thames has a tidal zone spanning 7.5m and those tides sweep in and out at five knots twice a day. The original plan was to build a cofferdam around the tower base, pump the water out and build the concrete base insitu. But as this was going to take too long, an alternative approach was adopted. Four 1.8m-diameter piles were built to support the tower. The skirt was precast on the north bank of the Thames in four sections while the piling was being done, which saved time, then placed over the piles as soon as they were finished, using a sheer leg crane on a barge.

“The timing was critical,” explains Randall. “We had to do it on a rising tide as there wasn’t enough draft for the crane. We needed to be able to see the tops of the piles so we could place the skirt.”

Once the skirt was placed, a 1.5m-deep pile cap was cast on top to lock the piles and skirt together. This included 186 bolts ready to receive the steel tower sections. Randall is delighted with the success of this operation. “It saved on temporary works and approximately six weeks on the programme,” he says. “It was a phenomenal win from our perspective.”

The next stage was to place the 13 steel sections that make up the tower. The proximity of a reed bed coupled with weak river walls meant the crane had to be located well away from the banks. “We ended up 120m away from the tower,” says Randall. 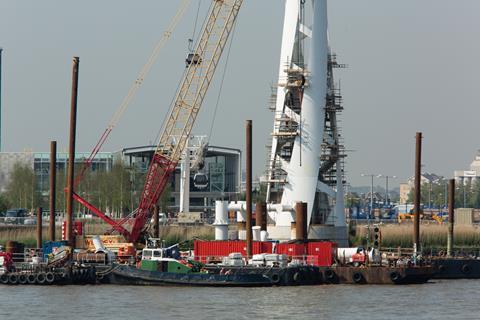 The south tower was built in the Thames. The helical design flows seamlessly from the main, steel tower to a concrete base featuring the same design

This meant an enormous crane was necessary, requiring 24 piles to support it. A 90-tonne crane was brought in to put together a 300-tonne crane. These two cranes were then used to build the 11,350-tonne crane needed to lift the sections into place. This crane was delivered in pieces on 70 articulated lorries and took three weeks to build, with the biggest steel section weighing 73 tonnes. “It was the biggest lift in the UK this year,” says Randall.

At the tops of the towers are the yokes and the cable support heads and wheel assemblies. The heads are adjustable to ensure the cables run in a perfectly straight line across all four towers. 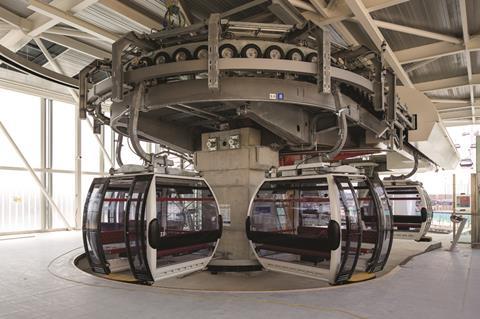 The cable car is an upmarket version of those used in ski resorts. The cabins transfer from a fast moving cable to a slower, secondary drive to allow easy access

The next challenge was stringing the cable across the system, a job that would be accomplished using helicopters were it in the Alps. “It was too scary for London as there was too much that could go wrong,” explains Randall. Instead, the cable is positioned using a boat. A lightweight “messenger” cable is used to pull through a bigger cable and finally the main cable. This was done in four phases - linking the north station to the intermediate tower, then to the north tower. The third phase was taking a cable from the south station to the south tower and finally getting the cable across the Thames.

“It’s one of the most difficult procedures we have ever done in our company,” says Ralph Nachbaur, who looks after projects for Doppelmayr in northern Europe. “In the Alps you can start and stop whenever you want. Here the coordination was very challenging.” 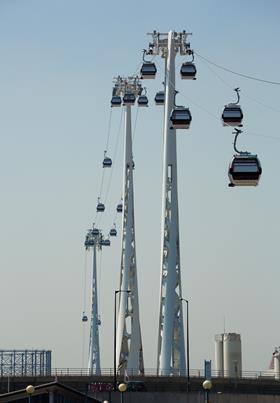 The cable positioning was carried out over the weekend of 30-31 March. The Thames was closed on the Friday evening and the messenger cable taken across the river by boat on a neutral tide. At 2am on Saturday morning the cable was ready to be winched up, linking the north and south tower.

“As the tension came into the messenger rope you could see it fizz across the water, which was quite dramatic,” says Randall.
The next stage was positioning the main cable, a job done on the Sunday. The 50mm-diameter steel cable weighs 9kg per linear metre, is 2.2km long and was pulled from the south station over to the north station and back again, complete with a communications cable on the return journey. Periodically, the cable was raised 20m above the river to let waiting boats through. “I must have had 60 phone calls from the harbour master that day,” sighs Randall. Finally the cable was tensioned to raise it 40m above the Thames.

The last job was to splice the ends of the cables together on the south side of the river to form a continuous loop, a three-day job that Randall describes as “phenomenally complicated”. The splice is 70m long and is achieved by the simple expedient of wrapping each cable strand around its neighbour. “The only thing which holds the cable together is friction,” says Randall.

The team didn’t have the luxury of Alpine space to carry out this job. “Here in London everything is different so we had to put the process into the station and manage it by moving the cable around,” explains Nachbaur. The south station working area was extended by building a working platform using scaffolding.

With the cable spliced, it is put under 70 tonnes of tension. The cable is looped around a large bull wheel at each end. The southern station bull wheel is fixed to the structure via two hydraulic rams which are used to tension the cable. This lifts the cable to its final, working height, 74m above the river. 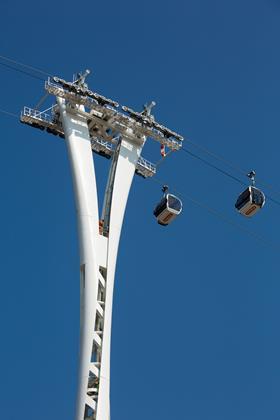 With the cable finished, work has concentrated on finishing the north and south stations and putting the gondolas - or “cabins” here, as this project is partially funded by air carrier Emirates, which also lends its name to the scheme (the “Emirates Air Line”). Load tests have been carried out and the project is almost ready for the paying public, although Transport for London is refusing to say whether it will open before the Olympics.

The project is high quality, looks fantastic and has been efficiently delivered. We will have to wait until later this year to see whether it shares the fate of its neighbour, the former Millennium Dome or, more happily, its close cousin, the London Eye.

CABLE CARS: A NEW WAY OF GETTING ROUND TOWN

According to Ralph Nachbaur, who is responsible for Doppelmayr’s sales and projects in northern Europe, cable cars are a growing form of urban transport. “Not only are cable cars cheap but are they are implemented easily because the footprint is only a few towers and these are easily accepted by the public,” he explains.

“The ski market makes up 90% of our business but isn’t growing much except in eastern Europe,” he explains. “City cable cars are a new market for us and it is a market that is growing.” The firm is installing a system in Rio de Janeiro in Brazil and sees the London scheme as a great marketing coup.

The London scheme has cost £60m and can transport 2,500 people an hour at speeds up to 22kmph in 34 cabins. According to Nachbaur, it will use 150-200kW to drive the entire system, making it energy-efficient.

Anyone who has been skiing will be familiar with the system - users enter a station at either end. As the cars enter the station they transfer to a much slower secondary drive system, allowing people to get in and out of the cars easily. Each cabin seats 10 people and has plenty of glazing to allow passengers to enjoy the views.

Unlike on the London Underground, people are unlikely to be left dangling in the air as the cable car enjoys two separate power supplies and a diesel back-up generator. There is also a back-up main motor plus two emergency drives.