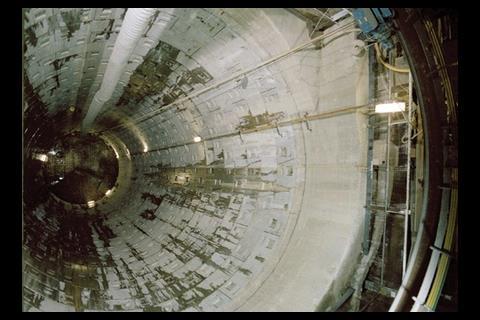 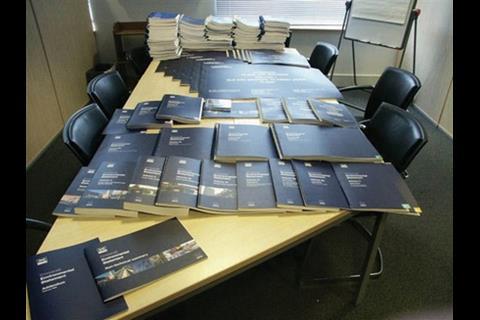 The complete environmental statement. Specialist technical reports are at the back 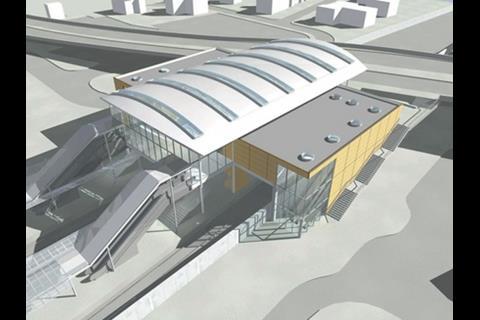 Eighteen years after the idea of a rail line running east to west through London was mooted, all that has actually been done is to dig this large hole. But, as Gordon Brown prepares to announce a funding strategy in his conference speech next week, that may be about to change.

It was 1989 when the idea of Crossrail was born. Now, after £150m has been spent, and many, many pages of environmental surveys produced, the picture above shows where we are with the work on site. It’s a ventilation shaft – albeit a ventilation shaft in a building designed by Norman Foster.

When Foster’s armadillo-like Moorhouse building was built in the City in 2004, Crossrail was on the backburner. The site’s developer, however, decided not to risk having to knock down the whole building if the enormous cross-London rail scheme finally lumbered into view, so the shaft got the go-ahead.

But it won’t be the only visible sign of Crossrail for too much longer. Gordon Brown is expected to announce a funding strategy for the scheme in his party conference speech and flesh out details in the Comprehensive Spending Review in October. What is known is that a third of Crossrail’s funding will come from the government, a third from businesses, through tax, and a third from borrowing against long-term passenger revenues. The Department for Transport expects the construction cost to be £8bn (in 2007 prices). According to Experian, which produces market forecasts for the Treasury, base inflation for Greater London infrastructure construction will be around 3.6% a year over the next five years. If Crossrail starts in 2008, at its peak, it would add 1.2% to that figure.

Before construction can begin, the Commons select committee scrutinising the bill has to report in October. Then the bill, which was first submitted to parliament on 22 February 2005 with more than 70 supporting documents, will finally make it to the House of Lords. Even then, it must go through three more committees and a two-month cooling-off period before it gets anywhere near the statute book.

The Crossrail team has so far spent just more than half of the £254m the government allotted to develop the scheme, which runs from Maidenhead and Heathrow in the west right across the capital into Essex and Kent. Considerable planning and consultation efforts have already gone into the scheme (see box, overleaf) – the list of all the firms who’ve worked on it over the years reads like a who’s who of the industry. The design team, based at Crossrail’s Victoria offices, are overall development manager Bechtel, Halcrow, Mott MacDonald, Scott Wilson and Taylor Woodrow.

Of course, the big question is whether there’s going to be anyone to build it. If construction begins, as hoped, in late 2008, the Olympic building programme will be in full swing and infrastructure investment across the UK will be booming. On the other hand, Heathrow Terminal 5 and the Channel Tunnel Rail Link will be finished, and work won’t peak on Crossrail until 2013.

“There is definitely an industry appetite to do it, but it will obviously depend on the procurement and contracting structure,” says one consultant involved in the project.

The main issue is, of course, risk. For the very deep tunnelling work and the links to underground stations through central London, he believes a partnership model with a target price is the only realistic option. “It’s such a big undertaking that if you went down the fixed-price route you’d end up with a much smaller field of runners. You might not end up with any sensible competition at all.” He suggests that BAA’s pioneering procurement of Heathrow Terminal 5 might be a model.

For the overground work at either side of London, Network Rail’s existing contracting procedures, which work on a traditional fixed-price model, would be a possibility.

Crossrail says it is currently working on its procurement strategy – much will depend on the funding arrangements announced by Brown next week. But before it can divide up the work into contracts, there’s the more pressing question of exactly which body will be responsible for overseeing it. Cross London Rail Links is a joint venture between Transport for London (TfL) and the Department for Transport, but it may decide to appoint Network Rail as its delivery partner, in the same way as the Olympic Delivery Authority relies on a TfL/Network Rail team to run the Docklands Light Railway extension works for the 2012 plan.

Once the bill becomes law, expected to be next spring or summer, Crossrail will start applying for planning permission and looking for contractors.

Then the real work starts …

As for the actual construction work, site clearance will take about six months, then the main civil construction phase is planned for the next three-and-a-half years, with all the tunnels being constructed simultaneously under central London. One of the biggest difficulties will be tunnelling through the varied terrain. Experts say the choice of boring machine is crucial, as it could hit clay, clay with rocks, running sand or one of a number of types of soil. Seven vast underground stations must also be constructed, and above ground, the contractors will have to weave a new rail line through the tangle of commuter and intercity routes into London. Then there’s the logistic challenge of working on the deepest, and most congested sites in the country.

There’s also the question of how Crossrail will be operated when it’s running. The government could opt for the rail franchise route, whereby the highest bidder secures

the lease, rolls out its own branding and keeps the money it raises. Alternatively, TfL could go down the concession route it’s chosen for London Overground (that is, the merger and extension of the Silverlink

Metro and East London line services between north and south London), where the railway will be within the Travelcard scheme and the operator is contracted to provide the service to certain standards. Since Crossrail will interchange with the tube network, this would make sense.

Whatever is decided, one thing is for certain: it all seems a very long way from a single ventilation shaft deep inside an office building in the City of London.

In 2003, six architects were commissioned to provide detailed designs for seven new stations under London. The architects were: John McAslan + Partners at Paddington; Tony Meadows Associates at Bond Street; Hawkins\Brown at Tottenham Court Road; Weston Williamson at Farringdon and Whitechapel; Wilkinson Eyre at Liverpool Street; and Ian Ritchie at the Isle of Dogs. Now the plans are being reviewed before the final versions are announced by Arup, Weston Williamson, Wilkinson Eyre and Aedas.

Some of the original six, such as Hawkins\Brown, had advised Crossrail on how the stations should be planned from the project’s inception in the late eighties and early nineties, but others were brought in during 2003 to produce more detailed plans. Mott MacDonald acted as consultant engineer on all seven stations until 2003, when Halcrow took over.

The design specification was to create stations with open, bright spaces, with natural light used wherever possible and a feeling of “spaciousness”. Although Crossrail is a very deep line through central London, air-cooling shafts are to be part of every station so that platforms will be naturally ventilated in summer.

The Isle of Dogs station plans are already quite far progressed. Unlike Canary Wharf tube station, Crossrail will maintain the dock and make the station partially submerged. “It will look a bit like a submarine,” says Ian Ritchie, whose practice is designing it. “Parts of the station will appear to be islands in the dock.”

Although Crossrail is not looking for signature designs, the cost is expected to be high because of the scale and the materials used. “The value is in the design life,” says Roger Hawkins of Hawkins\Brown. “You have to use robust materials and designs simply because of the number of people who are going to use it. The entire DLR network copes with about 210,000 passengers every day. Tottenham Court Road station alone will deal with that many.”

Hawkins says modern techniques will ensure that Crossrail has less of an impact on central London’s surface than the existing tube network. “Crossrail is at a depth that won’t affect what goes on above,” he says. “If you compare it
with the underground network developed in the 19th and 20th centuries, and the limitations they had, this is another world completely.”

It may be another eight years before that happens, but Ritchie compares the genesis of Crossrail to the development of the Paris Metro RER Line A, which began life in 1954, but did not open until 1977. Today, it is one of the busiest underground networks in the world.