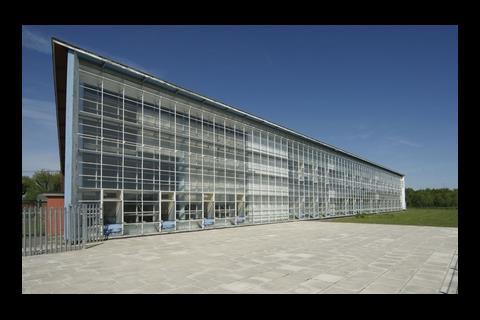 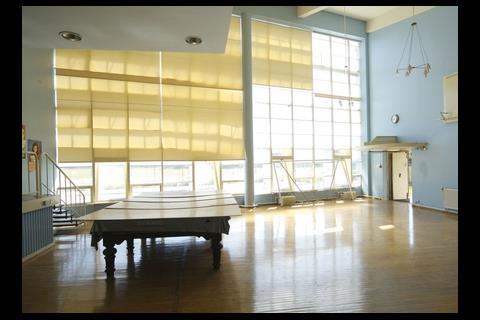 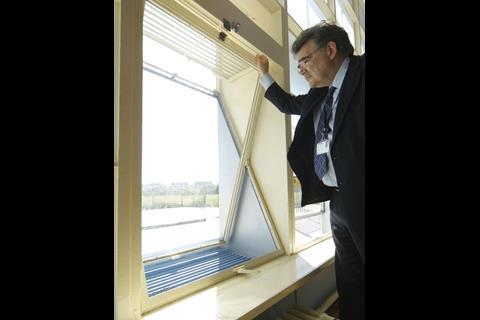 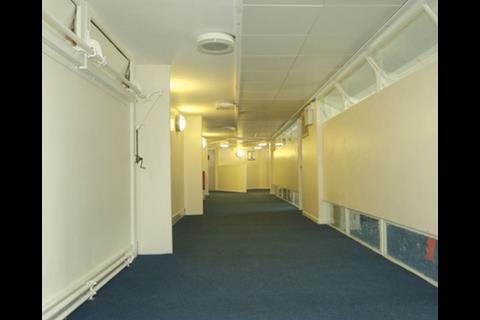 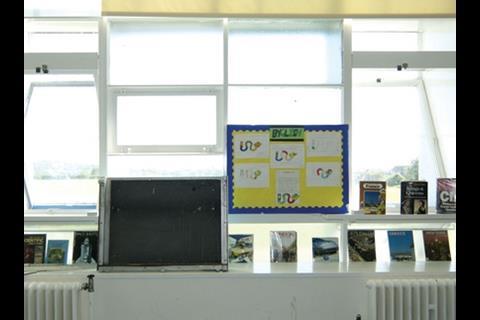 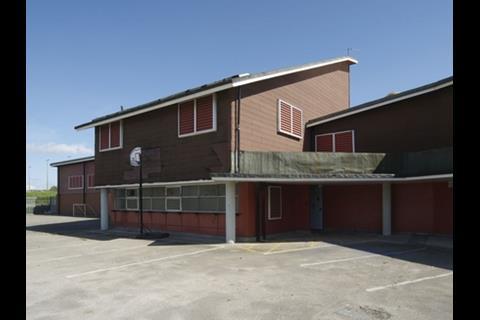 The approach view looks grim and boarded up 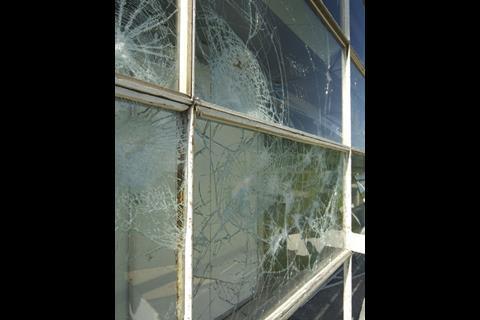 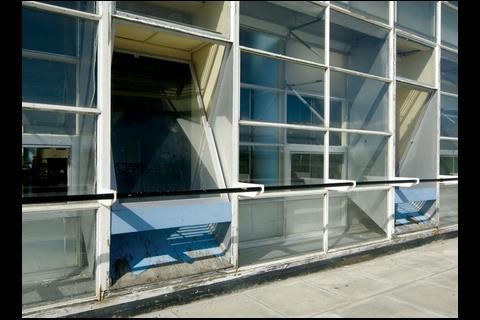 Martin Spring heads to the Wirral to see how Wallasey’s pioneering solar school is holding up, 46 years after it was built. Then, on page 50, find out how the 21st century does solar in the first of a series on renewable technologies

St George’s School in Wallasey was built in 1961 and is widely hailed as Britain’s first passive solar-controlled building. As well as its huge south-facing solar wall, the two-storey building contains an array of passive low-energy features. This design was the work of architect Emslie Morgan at Wirral council and, in 1996, the school was listed grade II*. But in the early nineties, the 300-pupil secondary school was shut down in response to falling rolls in the area. It is now in temporary use as a special needs school.

The classrooms remain in their original form, and since they are spacious, airy and brightly lit, they function fairly well as teaching spaces. But glare from the window wall causes reflections on whiteboards and screens.

Despite the huge south-facing window wall, the classrooms rarely overheat. In winter, the school remains snug without the assistance of radiators. Unfortunately, the iconic solar wall faces away from the approach road: what visitors see first is a grim, boarded-up building.

The building is so energy-efficient in form and fabric that only a tiny boiler is needed – and even that is only used three hours a day.

The efficiency derives from the solar wall, an ingenious natural ventilation system, massive heat-retaining construction and high thermal insulation. But it demands a lot of maintenance.

The rooms behind the glass wall are spacious, airy and, of course, brightly lit so they still function fairly efficiently as classrooms. “But,” says headteacher Christine Royle, “the biggest disadvantage is glare.” Severe glare from the window wall interferes with 21st-century teaching techniques as it causes reflections on electronic whiteboards and computer screens. Science teacher John Moxham says the reflections are “horrendous”. “It’s way too light,” he says. “To use the digital projector, you have to put up black-out blinds over all the glass.”

The building has been only partially upgraded to comply with the Disability Discrimination Act. Extra light fittings have been installed to brighten up the windowless corridor, but facilities manager David Armstrong of Wirral council education department says the domestic-sized staircases up to the first floor were too narrow to allow the installation of stairlifts.

Not suitable for difficult children

The building now serves as a special school for 40 children with emotional and behavioural difficulties. “They have very little patience with the building,” says Royle. The manually operated vents and blinds and the old-fashioned chain handles in the toilets are particularly unpopular with pupils.

The rooms are way too light. To use the digital projector, you have to put up black-out blinds over all the glass

“Two changes have had a huge impact on the building,” says headteacher Christine Royle. “They are the new carpets on the solid concrete floors and the personal computers used in teaching – both increase heat inside the building.” Not surprisingly, the biggest impact occurs on sunny summer days, when classrooms become hot and stuffy.

That said, overheating occurs on fewer days than would be expected, thanks to a package of ingenious measures in the original building designed to dissipate the solar gain from the window wall. On Building’s visit on a sunny day in May, the classrooms still felt comfortable.

Although ventilation is restricted as part of borough architect Emslie Morgan’s energy-saving design, fresh air circulates naturally through the classrooms by entering large pivot windows in the window wall, discharging through vents in the rear partition to the corridor, and from there flowing out of the building through external vents. Solar gain through the window wall is reduced by opaque panels with shiny aluminium faces that reflect sunlight. In addition, the sloping ceilings guide the air down from the high window wall to the eye-level vents at the rear.

Finally, massive brick walls and concrete floor slabs absorb temperature changes, although this effect has now been diluted by the recent addition of carpets.

One small staff office that is tucked behind the window wall but does not have discharge vent flaps at the rear “gets terribly hot”, says Royle. A portable ventilator and dehumidifier was installed to discharge through the window wall.

“Since working here, I’ve got rid of all my long-sleeved shirts,” says Royle. And that’s in winter with the hot-water radiators switched off for most of the day.

In winter, only 23% of the building’s warmth comes from solar gain. In Morgan’s original design, the building relied on the body heat of the pupils and on conventional tungsten lightbulbs to keep people warm in winter. Lights would be switched on in the middle of winter nights to warm up the building for occupation next morning. In addition, the heat would be retained by massive brick walls and concrete floors and prevented from escaping by high thermal insulation.

Nowadays, pupil numbers have dropped from 300 to just 40, tungsten bulbs have been replaced with low-energy ones and the concrete floors are covered in carpets. But this reduction in heat input is partly compensated for by the personal computers that are now used for teaching.

The corridors and toilets are on the north side of the building and unheated, so they become cold in winter.

Massive brick walls and concrete floors provide good sound insulation between classrooms. But Royle complains that noise spreads between classrooms through the 600m walk-through cavity within the solar window wall and along the corridor.

The window wall makes the classrooms remarkably bright in all seasons. Yet even though they have recently been fitted with roller blinds, they are still prone to glare. “You can feel pretty muggy-headed after a whole day working in them,” says Royle. Added to that, as nearly all of the window wall was fitted with opaque glass, pupils complained they could not see out. Many panes at eye level have since been replaced with clear glass.

Since working here, I’ve got rid of all my long-sleeved shirts. You can feel pretty muggy-headed after a whole day working in these classrooms

The building’s iconic glass wall is nearly lost from view by passers-by as it faces away from the main approach to the school.

The north-facing facade on the public approach side is grim, glum and windowless, as if the whole building had been boarded up. But this is exactly as it was designed: instead of windows, it is fitted with blind timber vent flaps and louvres. The external walls and monopitch roofs are all finished in dark maroon-coloured bitumen felt and this has been made even more unsightly by several clumsy patch repairs.

Only a tiny boiler needed

Morgan’s low-energy design was so effective that the building used less than half the energy laid down in government guidelines. According to figures compiled by Wirral council, the school’s total energy demand, including hot water and electronic equipment, amounts to 97kWh/m2, compared with the official figure of 250kWh/m2. Consumption is reduced by a package of energy-saving measures including passive solar control, restricted ventilation, massive construction that retains heat, and high thermal insulation. The U-value of the roof and walls is 0.3W/m2K, largely thanks to one of the first uses of expanded polystyrene insulation, while that of the solar window is 2.6W/m2K.

The building was originally fitted with an undersized oil-fired boiler purely as a safety measure, and the council claims it was used for the first time 16 years after the school opened. With many fewer pupils and no tungsten lightbulbs to warm up the school, radiators are now switched on each day from 7am to 10am in winter.

Thermostatic radiator valves were recently installed in each room, but caretaker Eddie Rimmer says he has turned them down from 21ºC to just 18ºC to compensate for the building’s passive heat gain and retention.

Keeping temperatures and ventilation in the rooms comfortable relies on the original network of manually operated controls – mainly ventilation flaps for intake and exhaust air in every room. This requires the users, and by default the caretaker, to open and shut the flaps as conditions change during the day. Ideally, the caretaker should also open all the flaps in the evening to purge the build-up of heat. The caretaker should also switch round the opaque panels in the window wall from shiny, heat-reflecting mode in summer to matt-black heat-absorbent mode in winter.

Over more than four decades, caretakers have understandably become less dedicated to these repetitive manual tasks. Accordingly, the council has investigated an automated controls system linked to a building management system, but has not yet allocated the funds to install it.

Improvements not all benign

Several improvements have been carried out to the building, but some have suffered from conflicting requirements.

On the plus side, thermal insulation has been increased to walls and roofs, and internal accretions removed. Less benign has been the blocking off of louvred vents above doors, which prevents the spread of smoke in the event of fire but also blocks off the natural cross-ventilation through the building.

Another scheme to add tinted film to reduce glare through the solar wall was vetoed by English Heritage.

The building is showing several signs of dilapidation. Paint is flaking on external timber beading on the solar wall, even though it was redecorated six years ago. In addition, a bitumen felt finish to the external walls and roof needs frequent repatching to prevent leaks.

As the glass wall faces playing fields at the rear, it has fallen victim to vandalism. It has become a target for golf practice and several window panes bear the scars.