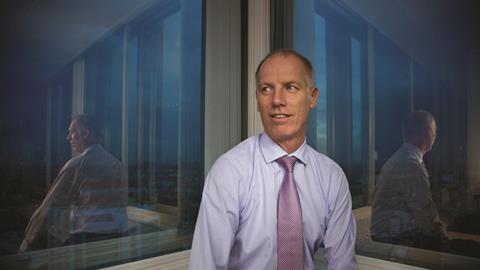 Faithful + Gould boss Donald Lawson knows a thing or two about consolidation thanks to Atkins’ takeover 15 years ago. He tells Building how it got the firm to where it is today

Consolidation of consultants is now all the rage, but as Donald Lawson, chief executive of Faithful + Gould, will tell you - his company started the trend. Long before Arcadis first made eyes at EC Harris or Aecom sidled up to Davis Langdon, consultant F+G partnered up with its own mega-bucks engineer, Atkins, in 1996.

Lawson, 52, who was heading F+G in Scotland at the time, remembers the buzz he felt on hearing the news - and not just because the tidy windfall from the deal enabled him to upgrade to a new car.

“It was exciting because it was something new,” he says, sitting in his office on the 31st floor of the company’s Euston-based headquarters. “It was good for us as this was a new development in the market.”

Speaking in his soft, measured Scottish accent, the man who is just six months into the top job at the company where he has spent most of his career argues the case for consolidation and reveals how Faithful + Gould is weathering the recession and positioning for growth.

A new man in the driving seat

Lawson took over as chief executive from Richard Hall in May, after five years as F+G’s chief operating officer. “It’s very good to get my hands on the train set,” he says with a smile. He has been waiting long enough. Lawson joined F+G in 1986 after brief stints as a QS first for architect RMJM in Libya, where he “worked on a Tripoli museum job for Colonel Gaddafi”, and then at Scottish consultant Blyth + Blyth.

Ten years after he joined construction project and cost management consultant F+G - initially to found its Edinburgh office - Atkins arrived. Having experienced working for a QS during the takeover of a big engineer like Atkins, Lawson is familiar with the arguments for and against such deals. He admits it’s a “leap”, moving from a partnership-type mentality to being part of a bigger business: “It’s a slightly different change in the dynamic. It’s about helping to support staff through that change.” However, Lawson believes the benefits are worth it. “It’s certainly worked for us being part of a bigger group. It gives you the ability to invest,” he says.

With the leverage of its parent company to play with, F+G grew substantially after the Atkins takeover, with staff doubling from 800 to nearly 1,600 today, through a combination of organic growth and acquisitions. The firm now turns over £175m and has 51 offices worldwide. In the UK, F+G bought Silk & Frazier in 1998 and Yeoman Edwards in 1999, and in the US it took over consultant Hanscomb for £19m in 2002 - its biggest acquisition to date.

Lawson says that, following the Atkins takeover, F+G was not faced with the same difficult post-merger decisions that Davis Langdon has today, as the latter attempts to make a quarter of its directors redundant due to the downturn: “We were in a growing market so it’s not the same situation.”

This is Lawson’s third recession and he says it is longer and tougher than any other. “The world stopped turning in 07/08,” he says. Turnover has dropped from £200m to £175m over the last five years. But he says F+G took early measures to “right size the business”. This included the “difficult” decision to reduce its US staff by 10%, with the loss of 100 jobs. And in the six months to September 2011, parent company Atkins let 878 staff go, mostly from its transport division. But F+G’s move to cut its cloth accordingly has stood it in good stead. F+G’s UK division in particular has defied the market to maintain turnover in the year ended 31 March 2011, with revenue down only marginally at £97.9m compared with £99.1m the previous year, and pre-tax profit rising from £4.9m to £7.2m.

Lawson says F+G’s diversity across sectors has also helped it weather the storm. “We wouldn’t have been in this stable and solvent position had we not been diverse,” he says - the firm has made regular moves into energy, finance, the public sector and aviation in recent years, and has a strong presence in projects in north America, including on the World Trade Center redevelopment. He adds that the company’s overheads, including staff numbers, are under constant review. “Costs are at the forefront of our mind every day,” he says. But after a period of retrenchment, Lawson says F+G has UK vacancies again.

The future for F+G

Having toughed out the recession thus far, F+G is now positioning for growth. It is not surprising to hear Lawson say that the UK won’t be the main driver of that any time soon as he does not expect growth here until at least 2013. “Our outlook for the UK is very much steady state - it’s about maintaining what we have.” Thankfully prospects look rosier in some of F+G’s other markets: the US, the Middle East and Asia.

In the US, F+G will look to build on its already established position in oil and gas, manufacturing, health and education, and Lawson also wants the division to target more work in project management. One of his first acts on becoming chief executive was to move the US business’ headquarters to New York and he hopes this will help facilitate this push into project management.

According to Lawson, the firm’s established position in the US will also help F+G with a strategy closer to home - the roll-out of building information modelling (BIM). BIM is already popular in the US and F+G has already used it on major projects there, including the extension of California’s John Wayne airport. Lawson believes F+G’s US expertise will help the firm train UK staff and drive adoption in its home division. “America is pushing [BIM] hard - it’s client driven,” he says.

Another area F+G can draw strength from is the Middle East, where it has worked on some of the region’s most iconic buildings, including the sail-shaped Burj Al Arab hotel and 360m-tall Almas tower, both in Dubai. The consultant will now target the infrastructure booms in Qatar, Oman and Saudi Arabia, says Lawson. “The price of oil is helping fund improvements and we want to be a part of that.” Even Dubai seems to be coming back a little, he adds.

F+G is also targeting growth in Asia from its offices in Shanghai and Singapore. The consultant recently completed a large photovoltaic plant for US-manufacturer REC in inland Singapore and has bigger projects in its sights.

However, there are some pockets of activity in the UK. Nuclear in particular is a bright spot: F+G is EDF’s procurement partner and QS on its nuclear new-build programme and is involved in maintenance work on its existing plants. It is also working on a cutting-edge nuclear fusion reactor research project in France, with its parent company Atkins, which could stand it in good stead for targeting further nuclear work. Lawson also mentions a “very busy” green consultancy division, launched in January, Although he adds that its future depends “to an extent” on the direction of government policy.

It’s a challenging market, but Lawson is in no doubt he’d rather be facing it with the weight of the UK’s biggest engineer Atkins behind him. He’s not surprised other QSs are following suit with similar deals. “The thinking is the same - that combined we’re better; that 2 + 2 = 5.”

Take it steady or take a risk?
Take it steady
Favourite ice cream flavour?
Strawberry cheesecake
What are you reading?
Six Seconds by Rick Mofina
And watching?
I was trying to avoid Downton Abbey when it was on - my wife and daughter pressed me into it. So I watched it while doing my emails. It was on at the same time as Spooks - which was great