The NHS’s estate now has a maintenance backlog of £6.5bn, but will the government’s recently announced financial package finally put it on the road to recovery, or merely keep it on life support? 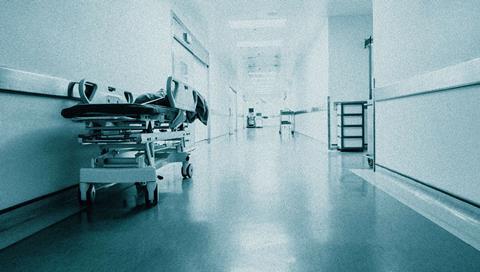 The Estates Return Information Collection (Eric) statistics for 2018/19, which were published last week, show that the NHS collective maintenance backlog has increased to £6.5bn. While this figure is less than some experts had feared, the number is still a big jump on the £6bn recorded in the previous year. And, confirming the picture of a deteriorating estate, more than half of the backlog is accounted for by maintenance issues that are deemed to pose a “high”or “significant” risk. To eradicate “high-risk” problems would cost NHS providers £1.1bn, more than twice the level just three years ago.

“Urgent” repairs or replacements are carried out to prevent “catastrophic” failures and “major disruptions” to clinical services. These failures could in turn result in serious injuries and ultimately prosecutions. The figure for “significant” maintenance problems, the next grade down, is £2.3bn.

At least £4bn a year – and possibly £5bn, given the parlous state of some estates – is needed for at least seven to 10 years

Helen Buckingham, director of strategy at the Nuffield Trust, a health think tank, says: “The split has changed from low and moderate to significant and high.”

The effect of the backlog can be seen in the 25% increase in the number of clinical service incidents in the past year, according to the Eric statistics. Poor maintenance – leading to power failures, sewage blockages and risk of fires – is often to blame for such incidents.

According to a survey carried out recently by NHS Providers – the membership organisation for the NHS acute, ambulance, community and mental health services that treat patients and service users in the NHS – more than 80% of hospital executives believe that continued capital underinvestment is putting patient safety at risk.

“There is a clear need to improve facilities across the country,” says Richard Mann, director of the building engineering healthcare practice at Aecom. The main reason for the growing backlog is that while NHS revenue budgets have increased in line with inflation in the past decade, capital budgets did not enjoy the same protection. In addition, capital budgets were raided to prop up revenues. So are the government’s recent promises of billions of pounds to be spent on the NHS estate a cure for the organisation’s ills or a short-term, misdirected intervention that won’t even be sufficient to cover the backlog? 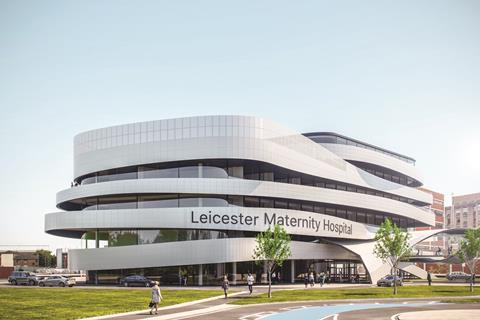 Leicester Hospitals NHS Trust will receive an investment of £450m to fund a development programme, including a new maternity hospital

The past few months have seen a brace of announcements designed to improve the increasingly threadbare NHS estate.

In August, one of Boris Johnson’s first acts when he became prime minister was to unveil a £1.8bn boost for NHS building repairs.

Then as a curtain-raiser for the Conservative Party conference in Manchester last month, health secretary Matt Hancock announced a further £2.7bn boost. This will fund the construction of six hospitals and provide “seed” money to work up building plans at a further 21 NHS trusts. To promote this spending largesse, Johnson has been pictured on hospital wards nearly as often as an extra from TV drama Casualty in the past two months.

“If work needs doing, organisations are happy [to get the money],” says a spokesperson for NHS Providers, adding that while the capital injection is a “useful safety valve”, it will take a few years for the new facilities to come on stream.

Conor Ellis, director of health at consultant Rider Levett Bucknall (RLB), says: “After a decade of austerity in health circles on all fronts capital and revenue, there is now some financial progress. It’s great that a number of major schemes such as University Hospitals of Leicester NHS Trust, Princess Alexandra Hospital in Harlow and Leeds General Infirmary, are going ahead.”

Mann says that those trusts, which have secured “seed” funding, will be able to start hiring professional teams to work up their plans and develop capital appraisals.

There are question marks though within the NHS about how the extra cash is being targeted.

Buckingham says there is no “immediately obvious” relationship between the recently announced projects and the trusts which have the biggest repairs backlogs.

“We weren’t able to see the criteria for choosing,” she says, pointing to the contrast between two London hospitals.

While the backlog at Epsom and St Helier trust, one of those identified for a new hospital, is £34m, the figure for nearby Hillingdon is £52m, according to the Eric statistics.

The NHS Providers spokesperson agrees: “We don’t know how decisions are made and how they are picked.”

Aecom’s Mann understands why some projects have been given priority, rather than some others that, on the face of it, seem to be more in need. He points to West Hertfordshire Hospitals NHS Trust, which covers Watford, St Albans and Hemel Hempstead, as an example of where work to prepare a business case has been carried out and partners have been lined up to deliver. Those who have done the spade work of preparation, get the rewards.

Mann estimates the latest spending boost could lower the NHS repairs and maintenance backlog by about a third. “These six projects will make a dent but not necessarily a significant dent,” he says.

NHS Providers, which recently launched a campaign for increased capital health service investment, has called for spending to be doubled over a multi-year period. Ellis agrees that this kind of increase is required. “At least £4bn a year – and possibly £5bn [compared with the £3bn currently spent according to the Health Foundation], given the parlous state of some estates – is needed for at least seven to 10 years.”

The Conservative Party conference announcement equates to around £600m extra a year, well short of the additional £2bn that experts and health trusts say is needed. 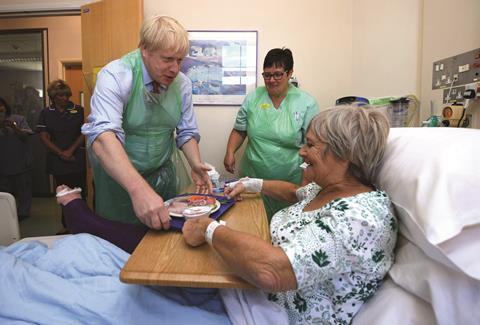 A particularly glaring gap on Hancock’s “lucky list” is that no mental health facilities have been given the green light, even though this was identified as a priority area in the NHS long-term plan, published earlier this year.

“Badly built mental health facilities will build patient harm into the fabric of the building,” claims one healthcare insider, pointing to the “much closer and more direct” relationship between poorly built facilities and patient harm in this part of the NHS. For example, in well-designed modern mental health facilities, it is much easier to monitor distressed patients than in creaky Victorian former asylums.

The NHS insider continued: “The worst mental health facilities are just not therapeutic environments – they are restrictive, depressing places that will stop people getting better.”

Another concern for trusts and their construction supply chain is that while short-term injections of cash will always be good news for beleaguered capital budgets, they are no substitute for a long-term investment programme. The six lucky NHS trusts to have been promised new hospitals will have to take the government’s recent pledge on trust, given that there are no capital commitments beyond the lifetime of the one-year spending review recently announced by chancellor Sajid Javid.

As well as more money, NHS Providers’ Rebuilding Our NHS campaign calls for five-year rolling capital spending settlements so that trusts can plan their building programmes.

“The NHS will always need a long-term visibility so you can address the backlog and assess what strategic investments are needed,” says the body’s spokesperson.

However, any spending increase looks set to come directly from the government. Its Health Infrastructure Plan, which fleshes out the recent funding announcement, confirms that it is government policy to “retire” any form of further use of private finance initiative (PFI) for investment in public infrastructure.

“The days of the big PFI hospitals are gone,” says Nuffield’s Buckingham.

However, most individual trusts will be unable to stump up the cash from their own resources, says the NHS Providers spokesperson, pointing out that the £500m cost of a typical major hospital building project is often equivalent to, if not greater than the annual turnover of the organisations commissioning them. “This will need headroom at a national level,” he says.

The 27-project programme announced by the government is dwarfed by the 100-plus major health schemes procured during the 1990s and 2000s the glory years of PFI. 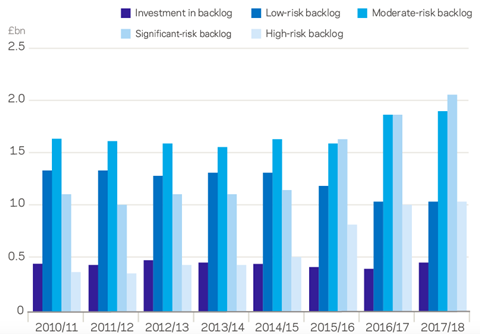 The ability of the supply chain to gear up for the new spending is another potential headache.  The P22 procurement framework (administrated by the Department of Health for the development and delivery of NHS and social care capital schemes in England) for small to midsized projects has helped to keep contractors such as Bam, Kier and Graham ticking over in the health market. However, the tiny gene pool of tier 1 contractors willing to take on whole hospital projects was further thinned last year by the collapse of Carillion.

“Clearly £2.7bn is a substantial sum to be spent,” says RLB’s Ellis, who thinks the amount of work presents a problem for suppliers, especially in London and neighbouring eastern regions where four of the hospital rebuilding projects are located.

The silver lining, though, is that a return to more traditional procurement methods may entice contractors who had an unhappy time with PFI back into the health market, says Aecom’s Mann.

He says: “A number of contractors didn’t have the best experience with PFI so if the government are proceeding with these six projects in the traditional way, it means that contractors will probably come back into the market.”

“A number of contractors are now considering their positions having pulled back from the market,” he says, noting Balfour Beatty is in pole position to complete the Midland Metropolitan Hospital project that was abandoned by Carillion when it collapsed last year.

This is good news not just for the industry but for the public purse as well, says Mann: “When you get just one bidder you don’t really get value for money for the taxpayer.”