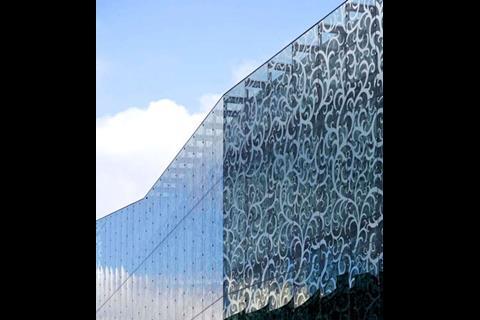 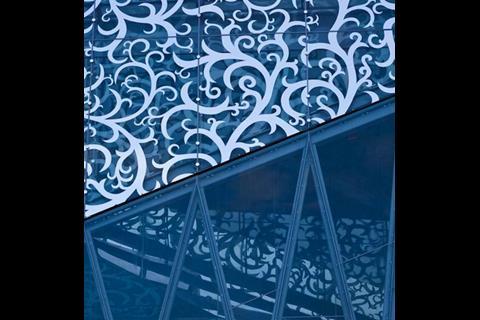 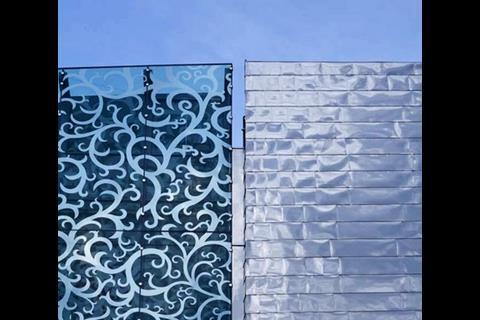 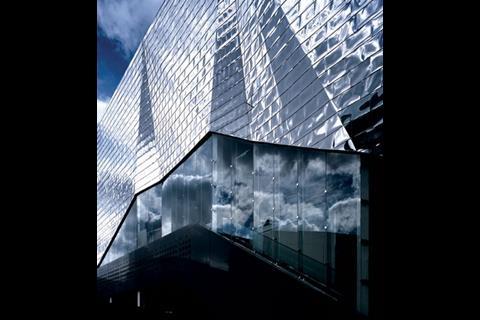 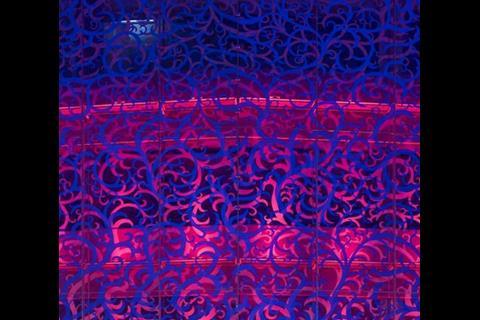 In the evening, the net curtains glow in exotic backlit colours. 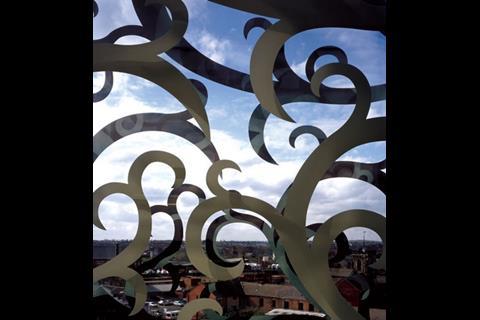 Since inside and outside patterns coincide, they offer liberating views out. 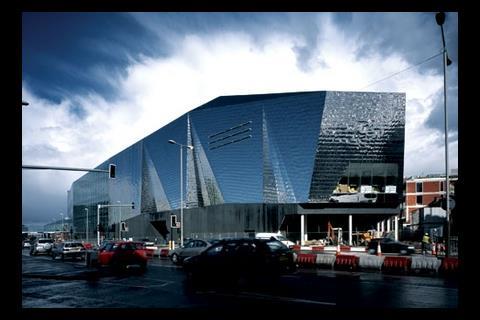 The curtain motif continues on the opaque facade of the adjacent cinema, where the ‘folds’ are used to conceal the service ducts. 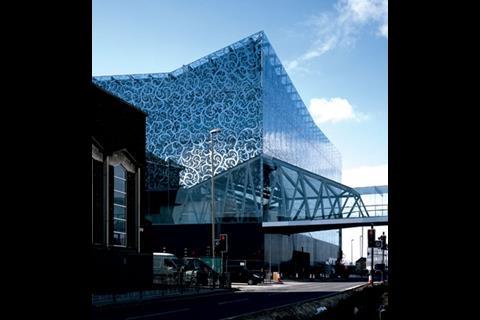 When you hear that Hammerson’s huge new department store in Leicester is entirely draped in lacy net curtains, you might think that the developer behind the glitzy, sequin-wrapped Birmingham Selfridges had settled into feeble, suburban domesticity.

But you’d be wrong. For a start, Leicester’s John Lewis department store is as urban as they come, facing a ringroad that hurls traffic around the city centre. Then there’s the revelation that Foreign Office Architects’ (FOA) design is actually more revolutionary, more subtle and more alluring than Future Systems’ Selfridges store. The lacy patterns are shiny, loud and in your face and, while Selfridges is opaque and inscrutable, the John Lewis facade is transparent, overturning the golden rule that retailers must be able to line their department stores’ external walls with merchandise.

A fresh and radical approach was exactly what was wanted by Jon Emery, managing director of Hammerson, which is why the developer went for FOA, a practice that had yet to complete a building in Britain, let alone a department store. FOA had shot to fame with its international competition-winning scheme for the £150m Yokohama ferry terminal in Japan, completed in 2002. This was enough to persuade Emery and the John Lewis Partnership to invite it to enter a limited competition to design the 25,000m2 anchor store for Hammerson’s £350m mixed-use expansion of Leicester’s seventies Highcross shopping centre.

It was at the initial competition stage that FOA came up with the radical idea of wrapping the store in a transparent window wall. Not that the idea was plucked out of thin air: FOA had done its research into department stores, John Lewis and Leicester. “It was exciting to know that John Lewis had built Peter Jones [in Chelsea] with Britain’s first curtain wall [of 1938],” says Farshid Moussavi, director at FOA. “And in Germany, there are a lot of glazed shopping malls.”

Having established the window wall principle, Moussavi was now prepared for a bit of give and take: “We knew the building shell couldn’t be totally transparent, so we proposed adding a net curtain, almost a translucent fabric. It would give the store privacy, because you could look out without being able to look in.”

“They liked it, so we went on,” continues Moussavi. “At a time of online shopping, we thought there should be something special about a physical department store. We thought perhaps the net curtains should have something to do with Leicester. The city has had a hosiery industry for 200 years, which still goes on. The city also has a large Indian population, with their translucent saris, and John Lewis is known for its quality fabrics – a place where we go to buy our bedspreads. The net curtains, hosiery and saris brought us to the idea of patterned fabric.”

To find an appropriate pattern, the architect delved into John Lewis’ archive, picked a couple of its fabric patterns, combined them and made then more geometric. Applied to the facades, the frond-like patterns became an optical device seen from both inside and outside.

As it was worked up into 3D architecture, several clever tricks were introduced. The double-skinned facade required two layers of net curtains in order to limit transparency, and the trick here was to line up exactly the same pattern on inside and outside layers. This creates a dual effect so that, when facing the facade head on, you can look straight through the gaps in the pattern, but when looking at an oblique angle, the two layers of patterns are offset and block your vision. So when you are inside the shop, you are offered liberating views out, but as the patterned facade starts at first floor level, views in from the outside are obscured. The two layers of obscure patterning also provide the practical benefit of sun-shading.

Next, depending on what it planned to place behind the facade, John Lewis asked for different levels of transparency. The wheeze here was to come up with four panel types with very similar patterns but varying thickness of fronds, so that the degree by which the transparency was reduced ranged from 34.25% to 43.47%, and the fronds all lined up at the panel edges so the four pattern types could be mixed and matched.

Leicester has had a hosiery industry for 200 years. The city also has a large Indian population, with their translucent saris, and John Lewis is known for its fabrics…

A further problem was that the seams of the net curtains – the silicon joints between the frameless-glazing panels – got in the way of the flowing patterns. With the help of structural engineer Adams Kara Taylor, the solution this time was to hang all three floors of the curtain wall from the top, thus eliminating movement joints at each floor, and at the same time to fix horizontal tension cables behind the facade to squeeze the panels more tightly together. In this way, many hundreds of horizontal and vertical joints were halved in width to just 24mm, leaving a virtually seamless glass wall.

After that, Moussavi wanted to pump up the spectacle of the facade. So instead of fritting the patterns on the outer panels in standard ceramic, the architect persuaded manufacturer Seele to innovate a shiny metallic frit that reflects the surroundings. The frit is duplicated on the inside surface of the outer panels, so the patterns cast their own reflections when viewed from inside, too. And at night, the facade is backlit to glow in a choice of 256 colours. “I hope it won’t turn into a disco effect,” murmurs Moussavi.

Yet all this intricate design was only half the facade’s story. The department store shares its four-storey oblong building with a multiscreen cinema, so FOA had to go through the whole optical design ritual all over again, this time for an opaque facade, which would not clash with its transparent neighbour. Stainless-steel shingles achieve the desired effect as they have a flat, shiny, reflective surface that flows remarkably smoothly across to the curtain wall next door.

Once again, the curtains appear to be – though in this case not patterned – net curtains. “Curtains are very much part of cinemas,” says Moussavi. “We thought that, if there were folds in the curtain of reflective shingles, the sun would create an almost rainbow effect, and at night it would become entirely blue in the moonlight.”

The clever trick this time was to use the cinema’s service ducts to create the folds in the curtain. Not M&E engineers’ standard-issue rectangular ducts, mind you, but triangular pleats that disguise their contents. They also add modelling to an otherwise flat facade.

The adjacent transparent and opaque facades flow subtly together to catch the eye of motorists driving past. Being reflective, they act as a giant screen onto which is projected the ever-changing sky, passing clouds, occasional sunlight, surrounding buildings and zooming traffic. And in the evening, the curtain walling glows in the various vivid colours projected from inside.

It’s distracting for motorists certainly, but was all this design complexity enough to drive the developer and contractor to distraction, too? “FOA fought for every detail,” confirms Hammerson’s Emery, before adding: “But in a very positive way. We appointed it to RIBA Stage D, and then [design-and-build contractor] Sir Robert McAlpine took FOA on of its own accord. FOA showed fantastic flexibility in working with Robert McAlpine.”

As for the commercial impact of FOA’s net-curtained department store, he says: “It gives Leicester a new icon of civic pride and our whole scheme a massive calling card.”

So, how does it measure up against Birmingham’s Selfridges, for which Emery was also responsible? “It has the same impact,” he says, “but it’s softer, more feminine and more beautiful than Selfridges.” Net curtains, it seems, are well and truly back in fashion.