Building hosts a stand at Interbuild 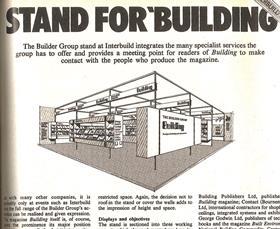 This week Building hosts its inaugural Building Live event - the first full-day conference of its type to be held by the magazine under its own brand in its 172-year history. It’s a far cry from the stand the magazine held at Interbuild back in 1975.

The aim of the stand was to integrate the many specialist services the group had to offer and enable a meeting point for readers to make contact with the team who produced the magazine.

An excerpt from an article promoting the stand read: “As with many other companies, it is probably only at events such as Interbuild that the full range of the Builder Group’s activities can be realised and given expression. The magazine Building itself is, of course, given the prominence its major position within the group calls for, but it is interesting to note that the stand was built by the group’s own firm of exhibition contractors and that a large part of the stand will be taken up by the group’s own bookshop displaying and selling books published by the group. Many of the exhibitors at Interbuild are clients of the group’s management consultants.”