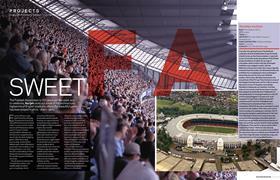 As we approach a summer of football, with Euro 2016 taking place in France, this week’s print issue sees architectural correspondent Ike Ijeh hop across the channel to profile the new Grand Stade de Lyon, one of the stadiums set to host matches during the tournament. Ijeh notes the influence the ground has taken from English stadium traditions - a subject that he also tackled in 2013, as the Football Association marked its 150-year anniversary. Delving into the history of some of the country’s oldest stadiums, it led Ijeh to Preston North End’s Deepdale stadium, which was built in 1875.

He wrote: “Deepdale stadium is widely recognised as being the oldest ‘continuously used’ football stadium in the world. But like most coveted historic accolades, it is fiercely contested. Its principal challenger is Bramall Lane stadium in Sheffield. Bramall Lane was actually constructed 20 years before Deepdale but as piqued Lancastrians are keen to stress, Bramall Road opened as a cricket ground not a football stadium.

“Undeterred, Bramall’s supporters sneer at the fragility of Deepdale’s ‘continuous use’ claim by pointing out that the ground was used as a prisoner of war camp during the Second World War. Defiant Preston North Enders retort that prisoners play football. Somewhere within this gentle cycle of rebuttal the truth invariably lies.”