The prime minister surprised everyone last week when he announced his desire to ‘roll back’ green charges on energy bills. So where does this leave the government’s energy efficiency policies? 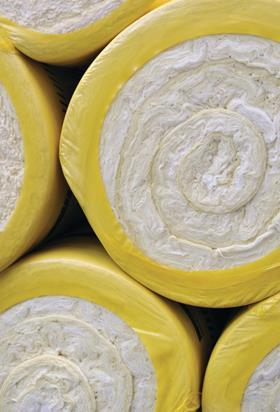 Prime minister David Cameron’s bombshell last Wednesday that he wants to “roll back” the green charges on consumers’ energy bills was a shock to the construction industry. Because as well as the £1.3bn ECO programme, the green charges cover the administrative costs of the Green Deal, the renewables obligation programme subsidising solar and wind farm schemes, and feed-in tariffs and the carbon floor price.

Contractors including Carrillion, Willmott Dixon and Keepmoat are already big players in the market for installing boilers and insulation under the Energy Companies Obligation (ECO) programme, and will be looking nervously at Cameron’s announcement.

But while this market for domestic work is most immediately under threat, the announcement - coming just two days after the government signed the first significant deal under electricity market reform programme to build the £16bn Hinkley Point C nuclear plant - also raises questions over the future direction of policy for building energy infrastructure. Because if Cameron was being forced to backtrack over green taxes which form just 9% of consumers’ energy bills, what does that say about the political acceptability of deals, like that for Hinkley, which contractually bind the UK into higher wholesale energy prices for many years to come?

There has been little solid information about Cameron’s plan - which the Lib Dems mocked as a “panicky U-turn” - but some key questions can be answered.

What has Cameron promised and what happens now?

In a heated debate at prime minister’s questions last week Cameron promised two things: to introduce a new “competition test” for the big six energy companies to ensure the market is working for consumers, and a review designed to “roll back the green charges” which sit on energy bills. For the details of these charges, which the government’s own figures suggest amount to £112 on the average bill of £1,267, see box, below.

The problem for the construction industry is that these charges fund billions of pounds of domestic retrofit work each year. The exact terms of the review will now have to be worked out between the coalition partners. Liberal Democrat politicians have made it clear they will fight any move to cut energy-saving programmes, though comments by leader Nick Clegg suggest the party will be open to any solution, such as moving the charges into general taxation, which finds funding for them from elsewhere. Former Liberal Democrat energy secretary Chris Huhne has raised the possibility of the government being judicially reviewed if it abandons energy programmes designed to help the poor, because of a legislative commitment to reducing fuel poverty. Whatever is agreed between coalition partners, it is expected that details of the policy will be announced in the Autumn Statement due on 4 December.

Green tariffs - how much do they really cost, and do they save money overall? 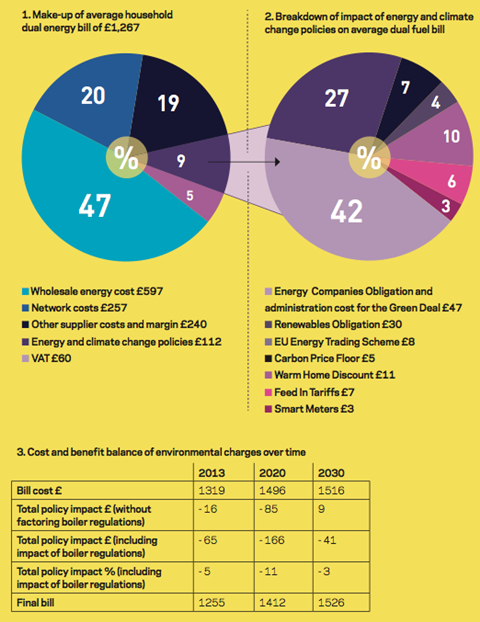 According to figures from the Department for Energy and Climate Change (DECC) so called “green charges” make up a relatively small amount of consumers’ energy bills - just 9% of the charge. They are being looked at by politicians because of a perception that they are easier for a government to reduce than either wholesale prices or network costs.

The situation is made complex by the fact that, taken in the round, the charges could save consumers money. This is because the measures are designed to reduce customers’ need for energy - by increasing efficiency, for example. Hence they should reduce bills. According to DECC’s figures, environmental policies on average save consumers £65 - 5% - on their annual bill, even when taking account of the costs. This saving will rise to £166 in 2020, as the impact of the Green Deal and ECO on energy use starts to be felt. The department’s figures the saving will then fall to £41 in 2030.

However, these supposed savings should be treated cautiously. First, it should be noted that bills are still predicted to rise - even though the rises would be still greater without these policies in place. But more importantly, the figures only measure “average” savings on energy bills. Most of the predicted savings on customers’ bills only occur if you are the beneficiary of one of the government’s programmes - for example, the Green Deal, ECO or the warm homes discount. This means that anyone not receiving support from these programmes is bearing all the cost without receiving any benefit.

The third caveat to note is that the biggest reductions in customers’ bills come from the impact of the government’s upgrade of Building Regulations covering boilers in 2010, which specified that only “A” rated boilers could be sold. Nothing to do with green charges at all.

What does this mean for the £1.3bn ECO programme?

The Energy Companies Obligation, which requires energy companies to fund domestic retrofit work such as fitting insulation, has been criticised for delays meeting targets and for being too expensive. It is also the single biggest green levy on energy bills, accounting for 4% of energy bills, so it is logical that it has been the primary focus of speculation over where the axe will fall.

ECO provides £1.3bn of annual work for contractors and this year replaced the CERT and CESP programmes of the Labour government, favouring more advanced solutions such as solid wall insulation rather than loft 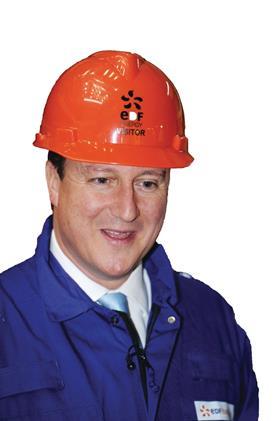 insulation. The transition between the two systems led to a long pause in work as energy companies worked out the new system. Neil Cutland, director of sustainability consultant Cutland Consulting, said this further uncertainty was already taking its toll on the insulation industry. “We will have no insulation industry left if it goes on like this. The times they have been kicked in the teeth… they can’t go on taking the kicking,” he said.

Nigel Banks, head of energy at Keepmoat, said any further transition in the programme would need to be handled more carefully than the last. “Changes will lead to a new regime which will create a hiatus [of work]. If they change it, it has to have a transitional arrangement,” he said. But Building understands that many of the contracts insulation providers have with the energy companies include clauses that could see work stopped immediately if any regulatory change is announced.

The obligation has several constituent parts and not all are behind schedule. According to figures from Ofgem, as of the end of August 15% of the target for the Carbon Saving Community Obligation and the Home Heating Cost Reduction Obligation had been met, putting the energy firms on track to meet these the targets by March 2014.

However, only 2% of the target for carbon reduction had been met. It is thought likely that the work required to meet the carbon target is where the government may look to water down the obligation, with Cutland saying he thought it was likely the time needed to meet the target would be extended.

But Andrew Warren, director of the Association for the Conservation of Energy, is more optimistic, citing a letter he received from Cameron earlier this year restating the government’s commitment to “work towards our 2016 fuel poverty eradication target”. Warren says construction work in the sector could actually pick up following the government’s review.

Could this also hit the Green Deal and other programmes?

Other green levies may also be changed, but none of them hold out the prospect of such a big or immediate cut in fuel bills. The Green Deal, the government’s flagship domestic refurbishment programme, is paid for by consumers, albeit with bank finance involved, and the government’s extra incentives already come out of general taxation, so it should not be hit hard by this review. However, there are an undetermined amount of “administration costs” paid for by green charges, which could be hit. The Renewables Obligation, which supports investment by energy companies in green energy projects, makes up £30 of the average bill and has not been explicitly protected.

The unpopular carbon price floor, a tax on fossil fuels used to generate electricity, only accounts for £6 on the average energy bill, but it is set to rise to around £50 by 2020 and up to £96 by 2030. It has been suggested by both Huhne and environmental charity Greenpeace that it could be cut without seriously damaging the case for renewables projects. But the Treasury is unlikely to want to give up the £1bn plus it will net each year from the tax.

What would Labour do?

Rolling back renewables subsidies would surely be a policy nightmare

Cameron’s decision to review the green charges on energy bills follows Labour leader Ed Miliband’s pledge to freeze energy bills for 18 months while the market is reviewed, if Labour get elected. The Labour Party has not specifically responded to Cameron’s move. However, Labour shadow energy secretary Caroline Flint has previously promised to both replace the Green Deal and radically review the ECO programme if Labour is elected. Former junior energy spokesperson Luciana Berger told Building last month the party, if elected, “will not continue with ECO in its current form.” She said the review of ECO would look at how to “redirect ECO funding to better target support for the fuel poor” while “ensuring a smooth and orderly transition” from the current system.

What are the implications for investment in green energy infrastructure?

On the face of it there appear to be few immediate implications. A statement from the Department of Energy and Climate Change said: “No one is talking about changing support for large-scale renewables or feed-in tariffs, which are essential for investor confidence in the renewables sector and our commitments to a low-carbon economy.” Immediate attention under the review appears to be focused on ECO and the warm homes discount.

I think what really annoys the Tory right about “green charges” on energy bills is not providing help for the poor, but the idea of subsidising wind farms.

However some are worried that growing public anger at high energy bills, and the need to respond politically to it, could start to break up the cross-party consensus over how to fund the next wave of low carbon energy generation infrastructure which has characterised the last six years. This relative consensus has been embodied in the government’s energy market reform package, broadly supported by Labour, in which the cost of future green energy generation infrastructure is paid for through a series of complex market interventions, including “strike prices” which guarantee minimum prices for energy generated from new infrastructure. With the strike price for Hinkley Point C more than 30p above the current 57p per MW/hr wholesale cost of electricity, power from the station could be more than 20% more expensive than today’s electricity.

John Alker, policy director of the UK Green Building Council, says the extent to which Cameron, chancellor George Osborne and environment minister Owen Paterson are now openly critical of the environmental agenda shows how far the debate has shifted in recent months. “I think what really annoys the Tory right about “green charges” on energy bills is not providing help for the poor, but the idea of subsidising wind farms.

“However, rolling back renewables subsidies would surely be a policy nightmare.”

Richard Threlfall, head of construction at KPMG, which helped negotiate the Hinkley strike price, says: “This adds a new layer of political uncertainty on to energy market reform which was already suffering from
lack of clarity. It shows the politicisation of infrastructure, as we have also seen with HS2, is right back on the agenda.”