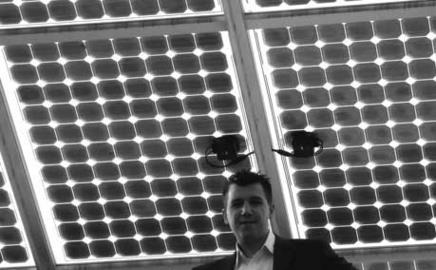 By rights, Kevin Hard should be joining all the other small businessmen desperately shoring up their livelihoods from the economic storm. Not only is his Nottingham-based business part of the beleaguered construction sector, it is also only 20 months old. So when Gordon Brown recently announced a £20bn initiative underwriting small business loans, it would have been reasonable to expect Hard to have been at the front of the queue to the prime minister’s door.

Yet, this isn’t the case. Hard, 28, says the business has no problems with funding and is on course to hit £1m turnover by its second birthday, having doubled its sales every six months since it was founded in May 2007.

So, what’s its secret?

Well, first and foremost, EvoEnergy specialises in the design and installation of photovoltaic systems, which is proving more resistant than many to the recession. When Hard began to feel the effects of the downturn last year, it wasn’t a disaster because the market was able to move towards more domestic installations. “The downturn means fewer projects are being built, which isn’t good for us,” he says, “but we are getting a massive increase in the domestic market as people see energy prices shooting up.”

Indeed, you could say, thanks to the downturn, something of a domestic boom has taken place. “With interest rates being cut, for the first time it makes economic sense to put in PV,” he says. “If homeowners put their money into solar power they get a better rate of return from selling the power than putting the money into a building society.”

EvoEnergy has a neat, knowledge-based business model. Just four people, including Hard, take on projects ranging from a couple of solar panels on a house up to a big commercial scheme. Hard’s team has management consultancy, electrical engineering and project management experience and designs the PV installations for clients and architects. The company project-manages jobs, but subcontracts all the installation work to another firm that has the capacity to take on big jobs. “It allows us to punch above our weight,” says Hard. “A small start-up would really struggle to do big £100k-plus installations as they wouldn’t have the labour.”

The company’s largest installation to date was worth £50,000, but if the tenders are successful it will be working on jobs worth up to £250,000, including Building Schools for the Future and commercial jobs. “The large projects take longer to go through the process,” says Hard. “We are now hitting the middle and moving towards the bigger stuff. That should happen towards the end of this year – if our current work comes off.”

Rising energy prices and greater awareness of environmental issues give Hard good cause to be optimistic about the future, although he is wary of the fact that the market is heavily driven by government targets to generate more renewably sourced power. “We would hurt a lot if this changed,” he says. “I wouldn’t say the market is guaranteed, as it does depend on [climate change secretary] Ed Miliband and Brown supporting it.”

But if anything, the levels of government support are likely to go up. The government subsidy paid to renewable energy generators for each unit of power produced is set to double in April, which will make the payback period for investing in PV more attractive. And the government is moving towards feed-in tariffs, which pay renewable energy producers an enhanced rate for the power they produce and have led to a boom in domestic PV in countries like Germany.