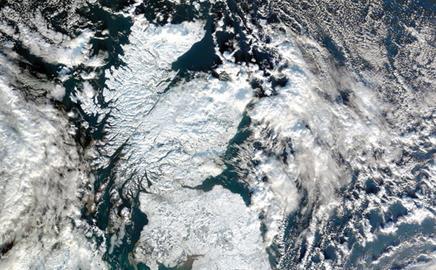 Britain’s experience of being Greenland looks like it may be over for now, but it’s left a lot of people out of pocket, and even more wondering how to prepare for next time …

Projects as large as the £9bn Olympic Games and as small as the £300 repair of domestic roofs came to a halt last week as the snow fell and froze and pretty much every surface underfoot turned treacherous. And as the picture to the right shows, the whole of Britain was covered in snow. Anthony Dillon, managing director of Willmott Dixon in the North, said 90% of the company’s operations in the region had been affected: “Any attempt at wet trades is futile as the water is freezing, and you can’t go up on the roofs because of the snow and the ice.” Industry commentator Brian Green guestimates that the snow has cut about £1bn from the industry’s output.

As Building was going to press, there was talk of Atlantic air masses on the way so the industry should be fully operational by the time you read this. But can firms claw back the cost of delays? And how much effect will the snow have on their payment? On top of that, given that the Metereological Office is predicting another visit from the Arctic oscillation before February, and the critical lack of gritting salt, is there anything more that firms can do to avoid freezing to death?

The aftermath of the storm

Rupert Choat, a partner in law firm CMS Cameron McKenna, predicts that the snow will figure in most claims for extensions of time. Whether they are successful or not depends on the form being used. For example, the popular JCT2005 states that “exceptionally adverse weather conditions” may give rise to an extension of time. Choat advises that the recent snow storms would meet this test in most places in the UK, which is good news for JCT contract holders.

The process for claiming under the NEC3 could be more tricky, because to qualify for an extension the weather must be shown to have been worse than the average for the month over the past 10 years. This is based on weather conditions at a location agreed in the contract, which bizarrely does not have to be the site where the work is taking place. This means that companies must wait until the end of January before they know whether the weather will entitle them to claim an extension, and that will only be for the days that exceed the 10-year mean.

On the plus side, NEC3 does what the JCT does not and entitles a contractor to claim its prolongation and disruption costs. What is more, firms do not have to provide an analysis of the impact of the weather on their work – the entitlement is automatic.

Most other forms, including JCT, require firms to prove that the weather has caused an unavoidable delay. For outside projects, this is straightforward, but for work being carried out inside a building, firms will have to show that labourers or deliveries were unable to get to site or that suppliers were disrupted; for example, several contractors have reported that deliveries of concrete could not be made owing to water freezing in factories. In the unlikely event that there is no reference to extreme weather in a contract, firms could claim force majeure – that is, an event that supersedes their contractual responsibilities.

In any case, lawyers stress that parties should notify the client as soon as possible of the intention to claim for an extension of time. Delayed completion will, of course, often mean delayed final payment, which could be serious for smaller firms that are already operating on starved margins and, as Julia Evans, chief executive of the National Federation of Builders, says, “are being squeezed by tighter lending conditions from their banks”.

The obvious advice is to attempt to negotiate a rescheduled programme with the main contractor or client. Willmott Dixon’s Dillon says: “We’ll look as much as possible to sit down with our subcontractors and clients to resequence work and achieve the original completion date. If it was just last week’s work it would be of less concern, but with another 10 days expected there’s only so much you can do – you can work weekends, but productivity often drops in the week.”

Any attempt at wet trades is futile as the water is freezing, and you can’t go up on the roofs because of the snow and the ice

If climate change leads to greater instability in the jet stream, and the arrival of more frozen air masses from the east, the definition of average weather (important for the NEC form) is going to get more Siberian. For this reason, construction firms are being advised to make greater allowances in their price for the prospect of vile weather.

There are also site-based solutions that firms can put in place. For example, Willmott Dixon has been using frost protection and heaters on some schemes to keep water above freezing point.

To mitigate other costs, the Federation of Small Businesses recommends putting a clause in their staff contracts to cover conduct on snow days. In theory, employees are obliged to come to work in a blizzard if their place of work is open, and do not have to be paid if they don’t, but it would be a brave firm that actually did this. Of greater concern is the impact of parents staying at home to look after children whose schools have closed. An advice document prepared by lawyer Pinsent Masons says: “To avoid the office becoming a crèche, there are statutory rules that allow parents to take time off when there is an unexpected disruption to childcare.” So, if alternative care for the children cannot be arranged, employees are entitled to take the day off. Strictly, the day is unpaid, but not all employers will take this approach – so a contractual arrangement would clarify the situation.

‘It all has a knock-on effect’

John Morris, 62, is the director of Merseyside contractor Datum Construction. He and half of his 25-strong workforce couldn’t get to work on Tuesday because of the heavy snowfall and gridlocked roads. He says: “I’ve been in construction for 45 years and last Tuesday was the first day I didn’t make it in to work. I live just six miles from my office but the roads were gridlocked – there was no point even trying to get in. And I can’t believe it was all because of the weather. It’s a complete nonsense.

“The government is prattling on about trying to fix the problem, but it needed a strategy to deal with this before it happens. The work just hasn’t been done to start with and I can’t be the only person who is highly irritated about it. We had a severe weather warning on Monday night but on Tuesday morning, none of the roads had been gritted. We’ve been told it’s because we have run out of grit in this area – that’s a pretty poor excuse considering the same thing happened a year ago. Where were the contingency plans? What about bulldozers and JCBs that could have been out clearing the worst of the snow overnight? They never appeared and so I was out at 7:30am with a shovel along with six of my neighbours trying to clear the way – and we are all over 60.

“This country is in dire straits and we can’t afford to have whole days where there is no productivity because of the weather. You’ve got old PC Plod telling you not to drive unless it’s necessary, but if he can’t make it into work, he still gets paid – with our taxes. For the rest of us who have to work to get paid, this has been a nightmare. Construction is suffering hugely at the moment and we don’t have much work on as it is – every job counts. And now I’m concerned about late payments on jobs because of people in various accounts departments for our clients not being able to make it into work and process them. It all has a knock-on effect.

“The government has said it’s too expensive to have gritters and snow ploughs in case of severe weather. Well, I want to see some evidence that this is more expensive than all of these lost days. Where are the sums? Weather patterns are changing and I can just see us being in exactly the same position next year. We need to keep production in the UK going, not stopping like this. The country is no different from a factory in that we survive on what we produce. If we are not producing, then what are we even here for? Situations like this compromise our livelihoods yet when the sun is shining everyone seems to forget about all the money we lost that we didn’t need to lose.”