John Woodman, Malcolm Hollis: 'There is a lot of money out there' 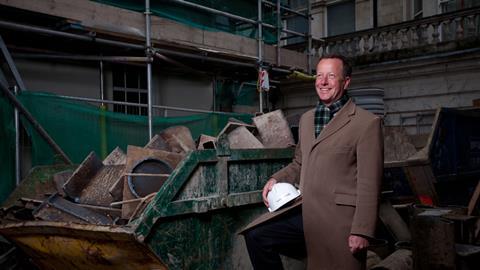 For someone who says his career was defined by the last recession, John Woodman is feeling surprisingly upbeat about our current predicament. The Malcolm Hollis senior partner explains all to Emily Wright

John Woodman knows better than to expect the best. The senior partner of building surveyor Malcolm Hollis gained his professional qualifications in 1989, “just as the market
went completely pear-shaped”, which he describes as a defining moment in his career and something he has never forgotten. He has based his business decisions on preparing for the worst ever since: “It’s not rocket science. You choose specialisms and services that will ride out downs as well as ups. It works.”

So it might come as a surprise that Woodman is feeling pretty upbeat this year - particularly as he heads up a company charged with maximising the value of commercial property, which is hardly a service well aligned to recessionary times. He firmly believes the summer will bring with it a marked improvement in the commercial property sector and fresh investment. As a result, his current plan is to double the size of Malcolm Hollis over the next four years - upping turnover from £11m to £21m - before potentially moving into
overseas markets for the first time. Woodman, it turns out, is an optimist after all.

Sitting in the company’s Mayfair head office, the 48-year-old explains how the firm will grow, why Malcolm Hollis is a good barometer for what investors are doing and why, despite his optimistic streak, he doesn’t think we will see the 2005 levels of investment in the commercial market “potentially ever again”.

Woodman joined Malcolm Hollis in 1991 at the age of 27 and has been planning for the downturn ever since. “When the entire market disappears as soon as you start your career, you remember that. And you look back on it to try and work out what happened to destroy the work, and make sure you plan against it.”

At Malcolm Hollis, Woodman put a strategy in place that focused on his field of expertise - dilapidations - an area of work that is likely to fare better in tough times than when there is a boom. This carried the firm through the nineties and again during the recent recession, although Woodman says he has ensured the company has diversified since he took the helm as senior partner in 1994.

“We wanted to make sure the market didn’t just see us as dilapidations experts. From 2000 onwards we have been using this specialism to build up greater technical due diligence and we have done much more refurbishment work over the last five years. Ten years ago we were 65% dilapidations; today it’s more like 30%, then 30% due diligence, 30% project management and 10% the rest.

WHEN THE ENTIRE MARKET DISAPPEARS AS SOON AS YOU START YOUR CAREER, YOU LOOK BACK AND TRY TO WORK OUT WHAT HAPPENED

“It’s so important to be diverse now as the commercial property world has changed so much - particularly in the last three years. You can’t just go off and buy a building now to sell it
two years later and make a good return. Most people are buying buildings looking to do some fairly active asset management to make their return.

“Clients know they need to be very commercial in this market. It’s not about caning a tenant for all that he’s worth. It’s about making the right claim, getting it settled in a decent timeframe and then looking at the asset management side of things, which flows into refurb. And this process is what we have positioned ourselves to be able to do - from start to finish.”

Woodman hopes that by operating in these sectors, and with the market steadying, now is the time for growth. He aims to double the size of the firm within four years by sticking to this work in London, as well as being well positioned in every major city in the UK through regional offices.

“Our offices are, quite simply, where the work is,” he says. “People say there is nothing happening outside of London. This may be true regarding development, but things need to be done to buildings if tenants are leaving - which is our bread and butter - and this remains an very active market in the regions. For us there are opportunities up and down the UK because of our very specific specialisms.”

This focus has been so effective that Woodman is reluctant to shift attention elsewhere yet: “Now is the time to keep things simple and stick with what you know.” But in the future, things could look different: “In a year or so’s time there are other things we will be potentially looking at. More active countries like Germany or Poland, for example. But not yet.”

A change in the weather

The dilapidations work may be carrying Malcolm Hollis through the tougher economic climate.

But is there any good news for the industry and the market at large? Apparently so. “We’re quite a good barometer for what investors are doing,” he says. “And I can
tell you there is a lot of money out there. There are a lot of opportunity funds, sovereign wealth funds, private money, big property fund money. But there is still nervousness, and bank debt remains a huge problem. I think this is changing a bit this year and there is more appetite than there has been for a while.”

How does he know this? “We look at how busy our survey team is. That’s the barometer. At the moment they are reasonably busy, busier than they have been for a while, but by no means flat out.”

THERE IS STILL NERVOUSENESS. I THINK THIS IS CHANGING AND THERE IS MORE APPETITE THAN THERE HAS BEEN

Unfortunately, this is about as far as his optimism stretches: “We would like to see things become flat out. But I don’t think there will be the level of investment activity we saw in 2005 to 2007 potentially ever again. Maybe in 20 years’ time. But this is why we want the company to be diverse, so there are always other things people can do.”

Woodman may have set out his stall for the next four years, but what about further in the future? This year marks Malcolm Hollis’ 21st anniversary but Woodman is clear on one thing - he won’t be sticking around for the next 21. “How old will I be then? 69. No, I won’t be here. I will be on a yacht somewhere relaxing.” Now that’s something to keep positive about.