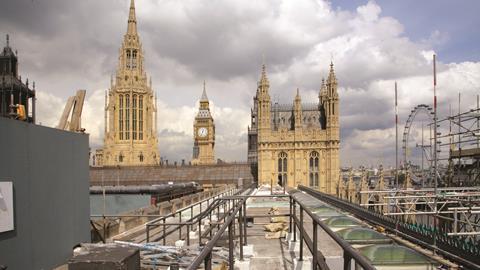 Palace of Westminster: stopping the rot

The creaky old Palace of Westminster is now in a state of dangerous disrepair – but political concerns around the timing of renovation work mean a start date keeps slipping further into the never never.

Famously, not a single one of the almost 4,000 windows in the 1,100 rooms of the Palace of Westminster provides proper weather resistance. As well as being draughty in the winter, the grade I-listed structure – rebuilt by Sir Charles Barry following a devastating fire on 16 October 1834 – is ridden with asbestos and suffers frequent sewage leaks.

MPs and their staff listen carefully for any creaks in the outdated lifts, fearing they could end up trapped inside yet again, while the lack of disability access continues to be a shameful feature of the mother of parliaments. The palace is frustrating in working hours and hygienically challenged for a post-vote pint. The wi-fi is patchy, and staffers are constantly on their toes in the sport and social club, dodging the small rodents trying to out-scurry each other to a tasty dropped crisp.

Nobody disputes that the palace is in urgent need of repair and refurbishment. House of Commons speaker John Bercow has warned that the gothic masterpiece will have to be abandoned unless “a not inconsequential sum of public money” is spent before the 200th anniversary of the fire. 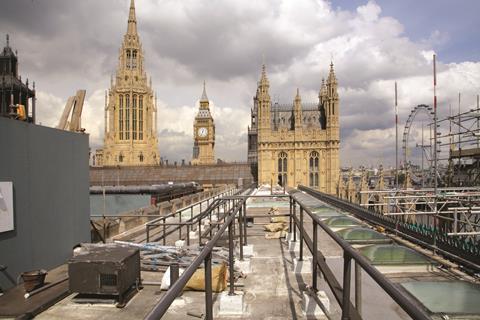 Signs of decay and disrepair are to be found everywhere at the Palace of Westminster. The roofs are leaking, causing significant damage to the stonework and historic interiors of the building

However, plans for the work are quickly becoming yet another victim of the all-consuming parliamentary battles on Brexit. The failure of prime minister Theresa May to secure an overall majority in June’s general election has pushed the works even further down the political agenda, as every vote becomes fraught with political danger for a minority government.

Reminding the public that a programme to improve the working lives of politicians would cost billions is perhaps not the wisest move at a time when the public seem to have rejected the establishment orthodoxy.

So what is the proposed schedule for parliament’s refurbishment and how far has all the recent political turmoil pushed this highly controversial project off course? Moreover, what are the political factors at play that will determine when, or even if, the works will finally get under way?

MPs had expected to debate the options for renovation works this autumn. A vote to determine the preferred option was previously expected earlier this year, but the snap election consigned that timetable to dust.

Nevertheless, preparatory work has been continuing away from the Commons. In July, CH2M, the US engineering giant that bought Halcrow for £124m in 2011, won the contract to manage the programme, while BDP was handed an architectural and design services role.

What no one seemed to realise was that the snap election would delay the refurbishment of the chamber, as the deal with MPs was that all new MPs will be able to give a speech

Building on the work of a report by Deloitte, a committee of MPs and peers warned last September that the palace faces “an impending crisis”, with the growing risk that a massive fire, for example, would mean parliament could no longer occupy the site.

After 14 months of deliberations, this restoration and renewal committee concluded that all politicians and staff should move out of the palace in a single phase. Deloitte had estimated that this full-decant option would cost £3.5bn over six years, while a less satisfactory solution, fixing up the palace around the everyday operation of parliament, would take 32 years and £5.7bn.

The committee identified a temporary home for a Commons’ debating chamber to be built in the inner courtyard of Richmond House, a building opposite the Cenotaph on Whitehall that is now home to Department of Health officials. The House of Lords chamber would move to the Queen Elizabeth II Conference Centre, a short walk from the palace.

Traditionalist MPs were worried the work could mean that an entire intake of MPs might never get the opportunity to speak in the Commons. This has taken on greater importance because many MPs and palace officials behind the project believe six years is an optimistic timetable. 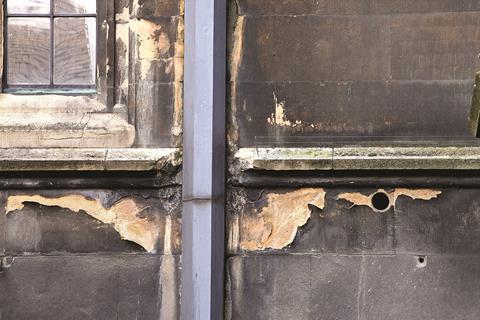 Signs of decay and disrepair are to be found everywhere at the Palace of Westminster. The roofs are leaking, causing significant damage to the stonework and historic interiors of the building

The proposed solution was to take advantage of the Fixed-Term Parliaments Act, which was passed by the coalition government to ensure that general elections take place exactly every five years.

The intention was that MPs elected in 2020 would give their maiden speeches in the Commons chamber immediately before renovation work began; the Palace of Westminster would then be shut for at least six years, although probably eight. Those elected for the first time in 2025 would get the chance to speak in a refurbished Commons chamber before the 2030 election.

However, this solution was put in doubt after May showed how simple it was for a sitting prime minister to overturn the Fixed-Term Parliaments Act, easily surpassing the two-thirds majority of MPs she needed to approve a snap election.

A source close to the project says: “What no one seemed to realise was that the snap election would delay the refurbishment of the chamber, as the deal with MPs [in return for support for the works] was that all new MPs will be able to give a speech.

“That was going to be the maiden speech after the [2020] election; and then for the next lot, a speech at the end of the following term. That would give a window of around eight years for the work.”

He adds that because the snap election came earlier than the end of the fixed term, “it looks like that schedule could have slipped by about two or three years”. He says a delivery authority was meant to be set up by the end of the year, or at the very latest the start of next, but “it won’t be”.

May’s grip on power is now so loose that there is ongoing speculation another election could be called at any point during the current “fixed” five-year term, which would make the plan even more difficult to enact. 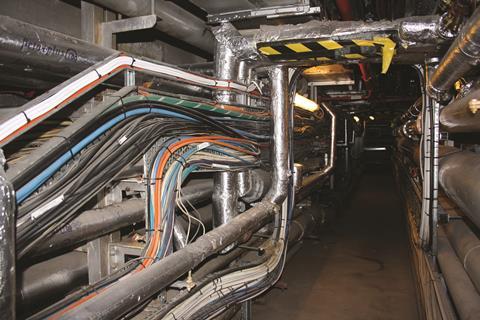 One of the most critical services is the steam-based heating and distribution system running through the basements. Some pipes are up to 130 years old

Neil Gray, a Scottish Nationalist Party MP who sat on the restoration and renewal committee, believes that any version of the project will cost “billions more” than has been outlined thus far and says a permanent move from Westminster should be considered. He asserts that the vote on whether to approve or amend the committee’s proposal should take place immediately.

Gray tells Building: “When is this going to come back to the floor of the House of Commons? What was the point of the work we did?

“This is a zero-sum game – every penny spent on this will be taken from somewhere else. But we can’t have this discussion until it comes back to the House.

“Some MPs are worried that we may never come back – which is irrelevant to the general public, who would baulk at the [refurbishment cost] figure, but wouldn’t care about who makes their maiden speech where. They’d be happy if parliament debates are held in a broom cupboard, if democracy progresses.”

Gray acknowledges that officials and ministers are so tied up with Brexit that this issue has been sidelined.

Another former member of the committee huffs that the committee had already agreed to delay publication of its report until after the EU referendum last year. The source believes the government is trying to delay a vote so that the public isn’t reminded of the billions of taxpayer money due to be spent on politicians.

The source adds: “My understanding is Theresa May wants nothing to do with it now.”

At the moment people are not focused on parliamentary democracy; they’re focused on fixing widgets. All our original planning was to be two years into a fixed-term parliament, not a few months into another one

A third restoration committee member, Labour’s Mark Tami, says: “There’s delay in the government bringing this vote forward. That’s not good for the programme, and the government should just get on with it.

“When I started off on the committee, I strongly believed they should work around us. I changed my mind and came to the view that we needed to move out – and I wasn’t alone in that. I recognise there’s no good time for a government to debate this and that ideally we wouldn’t move out [and risk MPs not speaking in the chamber]. But we shouldn’t lose sight that this isn’t about fitting around MPs; it’s about the future. Hopefully towards the end of the year we might hear something [about a vote].”

A recent article in The Times warns of delays of about 18 months, with plans being drawn up for MPs to vote on creating a sponsor board to further investigate options for the project, including feasibility studies. The board would comprise MPs, peers, engineers and a heritage expert.

A compromise plan would see symbolic events like the Queen’s Speech held in Westminster, placating the traditionalists. A motion expressly stating that the palace would remain the “seat of our democracy” would be put before the Commons, comforting those MPs who fear that parliament would never return to the palace once it has vacated, said the piece.

However, a source aware of government thinking on the renovation works claims that there are no imminent plans for such a motion. The source says that the likes of Andrea Leadsom, the Leader of the House of Commons, are attempting to build “consensus” among parliamentarians before a vote on the preferred option is scheduled.

“All sorts of people have got to be squared off,” says the source. “On a complicated vote like this, you don’t want a vote without consensus. Discussions are ongoing.”

A source close to Leadsom adds that it is “not appropriate” to disclose the timing of any debate.

But many of the officials, politicians and experts involved in the project are growing frustrated and are arguing that the delay means important preparatory issues are being overlooked.

One source says it is unclear how long the project might be delayed, but acknowledges there has been speculation internally that construction would start somewhere between 18 months and three years from now.

The source argues for other major works programmes to be brought within the restoration and renewal scheme. These include the potential refurbishment of the roof of the MPs’ office building, Portcullis House, and the closure of Big Ben for £29m of repairs.

“The whole asset management programme should be brought together,” the source adds. “They urgently need to get the delivery authority up and running, but that can’t be done until the vote. That has a domino effect – when one piece is not in place, it delays everything else.

“At the moment people are not focused on parliamentary democracy; they’re focused on fixing widgets. If the politicians want MPs to make speeches in there, fine; it can be planned for. But all our original planning was to be two years into a fixed-term parliament, not a few months into another one.”

Politics has proven remarkably unpredictable over the past few years. And one of the most unpredictable consequences has been the way it has sidelined arguably the most important construction project for British democracy in nearly 200 years.