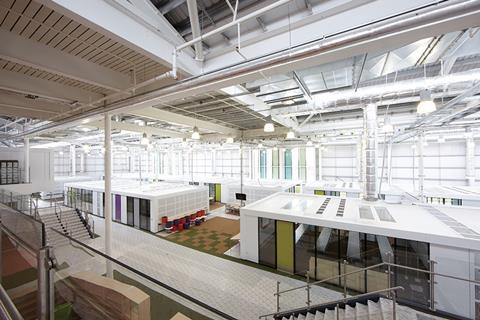 Since the scrapping of the Building Schools for the Future programme three years ago and the landmark James Review that followed it, the schools construction sector has become dominated by the pursuit of lower costs and shorter programmes. The new drive for standardised schools epitomises these trends with its emphasis on rationalised products and streamlined construction. But standardised schools are not the only response to the public sector’s stringent austerity drive and a new college set to open in Leeds presents an intriguing construction alternative. 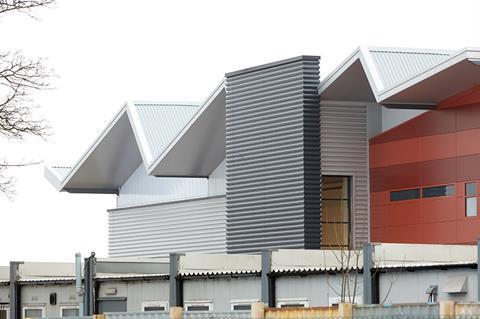 Leeds East Academy is the first school in the country to be constructed from a revolutionary pod system developed by Interserve, Maber Architects, Arup and specialist partition manufacturers Norwood. Their PodSolve concept is simple: instead of schools being constructed from the conventional fixed structural frame, PodSolve comprises a series of individual steel-framed rooms or classrooms that can be easily relocated, assembled or dismantled to create a truly flexible teaching environment. Crucially, the pods are free-standing and are entirely structurally independent from the building envelope in which they are placed.

At Leeds East Academy, the results speak for themselves. The 1,100 pupil, six-form entry school took just 60 weeks to construct rather than the more usual 80. It also cost just £13.65m, more than £5m cheaper than its original 2010 Building Schools for the Future (BSF) estimate. It is also cheaper than the alternatives initially considered by the school of either extending or refurbishing the existing sixties school on the site, which is in appalling structural and cosmetic condition and is now in the process of being demolished.

The new academy’s cost of £1,370/m2 also compares favourably with other local schools constructed from either the BSF or standardisation programmes. Campsmount Technology College in nearby Doncaster, one of the earliest standardised schools, cost £1,500/m² to build and Holy Trinity School in neighbouring Barnsley, a hybrid of standardisation and BSF, produced a build ratio of £2,566/m². 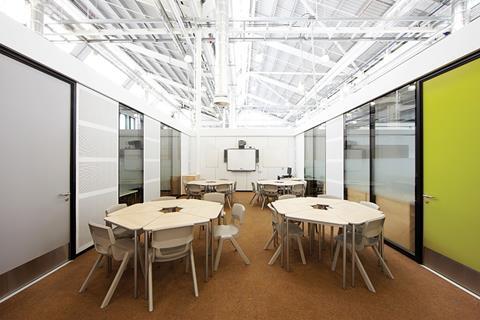 The first of many?

While Leeds East Academy is the country’s only PodSolve school at present, Interserve believes that it will be the first of many. As the company’s divisional director David Large points out: “The concept was developed from a general feeling of disappointment that the standardisation model didn’t really offer anything different and was also driven by the desire to create something more than just square boxes off a corridor.” Another key ambition right from the start was to reach a cost target below the £1,500/m² and £2,400/m² typically set for standardised and BSF schools respectively. So could the PodSolve concept beat standardisation at its own game and be the real quick and cost-effective solution to the UK’s schools rebuilding programme?

In plan, Leeds East Academy is conceived as a simple 100m x 60m rectangle split into three layers. The first, northerly section contains large, communal areas such as the sports and assembly halls and a dance studio. The middle, narrowest section is referred to by Maber director Ian Harris as the “wet spine” of the building and incorporates highly serviced areas such as science laboratories and IT suites. Both these sections of the building are traditionally constructed and have a standardised two-storey steel structural frame.

The bottom and largest section of the building is where the pod concept comes into play. This contains a double-height “general purpose space”, which incorporates what is referred to as the “street”, which runs the full length of the building and divides the “wet spine” from the pods. The pods are then arranged on the southernmost side of the building and the “street” in randomised, chequerboard fashion. Several of the spaces between the pods feed directly off the “street” and are conceived as break-out spaces. 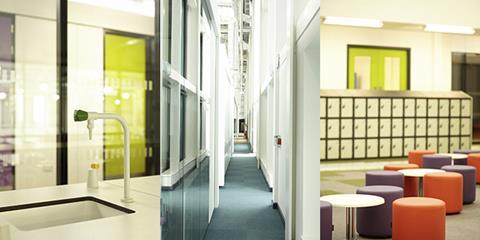 The pods themselves are single-storey metal rectilinear boxes that vary from 54m² to 100m². Although they cannot be placed directly on top of each other, they can be set back to back if required. As Andrew Boydell of Norwood explains, the pods are all constructed from a “simple kit of parts which includes steel wall panels, double-glazed panels, acoustic panels, a service panel which accommodates pre-fixed power, data and socket apparatus, ceiling panels […] and ventilation panels which facilitate the passive ventilation system by which the pods are cooled”.

The pods are serviced via “plugged in” narrow chutes that hang from the school’s ceiling. All plant at the academy is located on the roof and distributed downwards, a centralised solution that negates the need for individual services for each pod. Heat and hot water is produced via a 45kWe CHP unit and 70% of the energy within the building is recovered.

While the main building envelope is mechanically ventilated, the pods themselves are naturally ventilated via an air path, which draws in air from the main building via low-level slot vents at the base of the pods before expelling extracted, stratified air back into the building. Harris maintains that this provides “clean and rapid air changes within the building and creates six times more airflow using zero energy”. 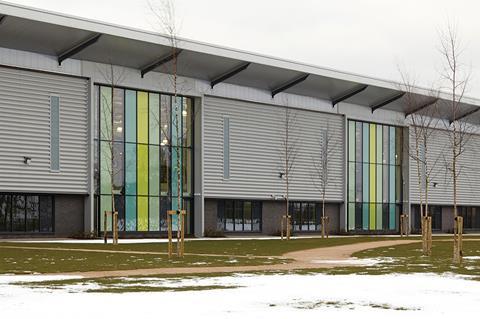 The pods also achieve the standard required daylight factor of 2 while the reminder of the building, generously top-lit from north-facing rooflights that comprise 10% of the saw-tooth roof, achieves an impressive daylight factor of 5.5.

The pod’s metal panels provide wipe-clean surfaces that are durable, robust and as a result, presumably pupil-proof. One amusing frustration that Boydell and Harris wryly share is the local education authority’s apparent failure to grasp the functional opportunities presented by the pod’s metallic surfaces. Instead of securing visually consistent metal fixtures to the pod’s internal walls magnetically, they have been diligently embellished with a mundane but municipally recommended concoction of standard issue fixtures such as wooden coat hooks and felt pin boards.

Flexibility is the buzzword when it comes to modern school design but rarely has it been embraced with more conviction than at Leeds East Academy. The pods are central to this strategy. As Boydell proudly says: “They can be assembled in just four to five days and can be dismantled in just one.” The school is thereby free to move or add to them as they or their curriculum requires. Additionally, if the school required more pods, its steel structural frame could easily be extended to support new pods built in the open void above the existing ones. 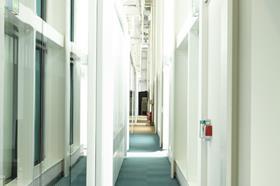 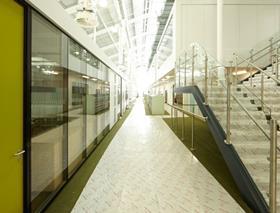 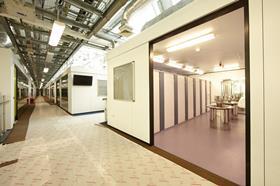 While the pods are pre-assembled off site in order to accelerate construction speed, Harris is also keen to point out that “we didn’t want them airlifted in as fixed objects, we wanted each pod to be customised to the school’s specific requirements; it’s not a one-pod fits all solution.” Accordingly, Boydell reveals that the various glazing, metal, acoustic and service panels are completely interchangeable, which means that no two pods need look the same and can easily respond to specific teaching requirements.

He also points out that the pods are the product of a long process of refinement and development. They can respond quickly to design changes with an evolutionary speed and receptivity that has far more in common with the world of product design and manufacture than it does with the more glacial pace of construction.

“In a way these pods are still prototypes and a kind of work in progress” Boydell explains, “Future changes we’re already thinking of are having smaller panels that aren’t full height that can be easily pulled out and relocated so that a teacher can swap a glazed panel with an acoustic one, for instance, if required.” Boydell reveals that a waterproofed exterior pod concept is also being developed.

Harris argues that the pods’ negation of the internal walls of which schools are typically comprised means that they have created a more “flexible, corridor-free interior where movement is based on the more efficient principle of percolation rather than circulation”.

But Leeds East Academy’s flexibility does not just stop with the pods but extends to the entire building envelope. “There’s a huge relative value and residual asset to this kind of building,” insists Harris. “Now it’s a school but in 20, 30, maybe 40 years’ time there may no longer be a requirement for one on this particular site. In which case all that would need to happen would be to remove the pods and you have a shed that could be converted into an office, factory, warehouse, virtually anything. That’s true long-term flexibility.”

Harris is passionate about the design concept that has been developed at Leeds East Academy. “You don’t start with a shiny BSF envelope. The box is unimportant. We’ve very much designed this building from the pod out. It’s a modular concept but it’s also smart and intelligent.”

While Harris and Interserve’s Large maintain that the building’s open plan design allows for the passive surveillance essential for student discipline and safety, the cavernous interior, with its exposed, ceiling-hung plant offers an overwhelmingly raw and industrial character. What it lacks in refinement it certainly makes up for in honesty and Harris defiantly points out that “Tesco don’t care what’s above the shoppers in their stores, it’s what you engage with and experience at eye level that counts.” 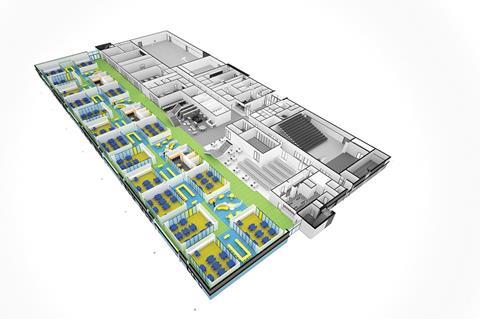 The plan is split into three layers, pods (coloured) occupying almost half the volume

Furthermore, with the visual and structural disconnect between the building exterior and its interior with its free-standing pods, Leeds East Academy has far more in common with a department store or exhibition centre than it does with a traditional school. The facades themselves are somewhat lugubrious affairs with the northern elevation featuring a dour rendition of chunky grey corrugated metal panels rhythmically punctuated by double-height shafts of glazing and its southern equivalent revealing a softer and more successful composition of bronze-coloured metal sheets and dynamic massing geometries centred on the entrance.

Does the prioritisation of the pods, as well as Harris’ comments about the importance of the “box” render the external envelope less important with the PodSolve concept, which would seriously undermine its architectural integrity? Not at all, explains Harris. 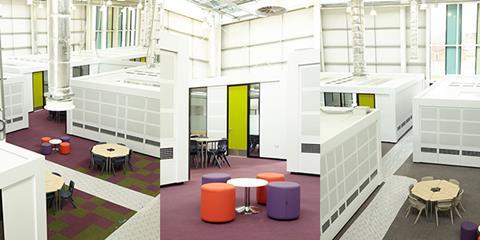 “Actually the fact the exterior is so wholeheartedly independent from the interior gives you the opportunity to relate the elevations to site and context in a way that does not restrict the internal environment and to an extent which the standardised school model would never allow. It also gives the school the freedom to completely change their internal layout if they wish without attracting planning consequences.”

While some will never resign themselves either ethically or aesthetically to the idea of a school essentially housed in a shed, no matter how sophisticated its internal air flow or heat recovery system, PodSolve undoubtedly represents a quick and cost-effective design solution that, while not a thing of beauty, is without question the most genuinely flexible school design concept to date.

Is this the future?

To an industry weaned on the bounty of BSF, it is easy to dismiss the PodSolve concept as uninspiring. Prefabricated metal boxes located in factory-like sheds does not exactly sound like a recipe for aesthetic wonder or academic success, no matter how cheap they are to build.

But what is the purpose of a school? Is it to produce glossy architecture? Or to provide an adequate environment for learning? If the latter, then PodSolve has considerable merit.

Architects (rightly) tend to be more concerned with cladding and finishes than schoolchildren are. What pupils want is a safe environment which, if they’re lucky, might even have points of interest to engage imaginations. Like services hanging from a ceiling like silvery intestines or the escapist seclusion of classrooms burrowed into pods.

Will PodSolve schools win design awards? No. Are they the answer to the national drive to build high-quality schools quickly and more cheaply? Only time will tell. But PodSolve does set a challenge to the rest of the industry to redefine the functional, financial and aesthetic criteria that drive our perception of what a “good” school really is.