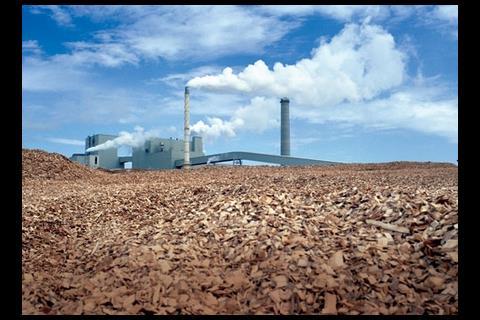 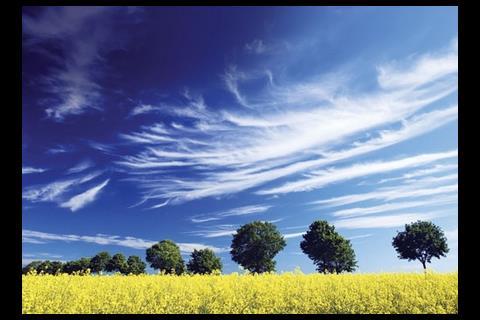 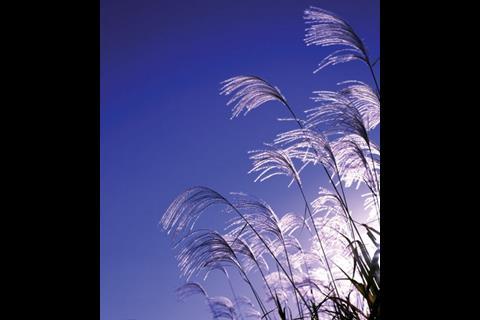 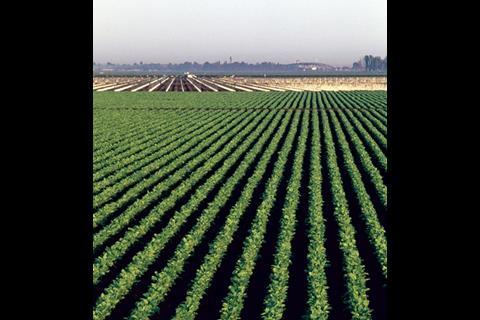 Ethanol from sugar beet emits half as much carbon as diesel. Some studies claim this ethanol can actually produce more carbon dioxide than burning natural gas 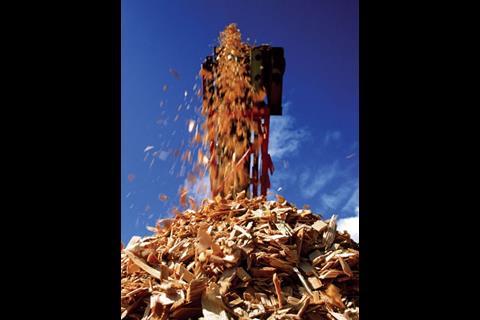 Look around you at all the things that you can set fire to. Now imagine you can do that instead of paying your gas and electricity bills. Interested? Better listen to what Thomas Lane has to say …

Back in the late eighties, Britain made its celebrated “dash for gas” – a wholesale switch from coal-fired to gas-fired electricity generation. Today the country is poised for another dash, this time for bits of wood, dead cows, potato peelings … in fact any biological material that is susceptible to combustion.

The advantage of this “biomass” fuel is that it is carbon neutral – whatever carbon is added to the air on burning was subtracted from it during growing. And it is attractive to building designers because it is an easy way to meet the planning requirement that 10% or more of a building’s power be generated from on-site renewable energy. Finally, biomass is cheap and reliable compared with solar and wind power.

Just because something makes sense does not mean that it will necessarily catch on. Paul Appleby, associate director of engineer URS’ building sustainability team, says biomass’ success is partly the result of its championing by BioRegional, the developer and green entrepreneur behind BedZed, and partly because it is the cheapest way to generate energy from renewable sources. Indeed, biomass boilers cost the same to run as natural gas and are cheaper than oil or LPG.

Several organisations including BioRegional and Defra have tried to work out how much energy could come from biomass. Based on its calculations, Defra has set a target of 5% of road transport fuel coming from energy crops by 2010. By 2020, 17% of the total arable land area in the UK could be producing half of that target with the rest coming from imports. Turning over nearly one-fifth of our food-producing land for biodiesel and expecting to power buildings from firewood and rubbish is extremely ambitious. The question is, is it possible? Is there enough biomass out there for all those biomass boilers?

BioRegional has looked at all the planning applications made over the past two years that include biomass. “It looks like there is between 25MW and 30MW of heating over the next two to three years and there is no sign of it tailing off,” says Andrew Tolfts, forestry project manager at BioRegional.

He says up to 35,000 tonnes of dried wood chips would be required to feed this demand. BioRegional estimates that 261,400 tonnes of waste wood and dried wood chip sourced from forestry, tree surgery and sawmills are available each year in London and the South-east. More could come from energy crops but if Defra wants to meet its targets, most of these will be used to produce biodiesel. Assuming a supply chain could be put in place, there should be plenty of woodchip to go round.

Big industrial users could quickly change this picture, however. Food producer Tate & Lyle plans to install a woodchip-fired CHP plant at its east London factory. According to Tolfts, this will gobble up 60,000 tonnes a year. Power companies are turning towards biomass, too. There are plans for a 150MW power station in Cardiff Bay. Drax, the UK’s largest coal-fired power station, is planning to help improve its dirty image by burning 500,000 tonnes of biomass along with coal, and there are plans for more power stations in the pipeline. If we start burning biomass on this industrial scale, most of it will have to be imported or specially grown.

The bigger our appetite for biomass, the less environment friendly it becomes. Making good use of locally sourced, underused woodland and waste wood is a laudable aim, as very little carbon dioxide is produced processing and transporting it (see table). Carbon dioxide emitted in transporting wood from abroad is also low but the picture rapidly changes if you start growing energy crops that need to be fertilised and converted to fuel. More than three times as much carbon dioxide is produced from woodchips produced by short-rotation coppicing than harvested from existing woodland. Miscanthus, or elephant grass, is even worse: one gallon of fossil fuel diesel is needed to produce two gallons of biodiesel.

There are also thorny political issues surrounding biofuel production. The UN has reported that large swaths of Indonesian rainforest have been cleared for palm oil production and there were riots in Mexico when maize prices quadrupled because of the demand created by biofuels.

Leaving aside the political ramifications, how practical is biomass for powering our buildings? As a heat source it has many advantages (see table above). According to Neil Turner, manager of the heat and power division of Renewable Energy Systems (RES), biomass boilers are reliable, readily available and easy to run and maintain. “Heat-only biomass is a proven, tested technology,” he says. RES also provides an energy supply company option (ESCO), under which it will install and operate a biomass boiler for a development and charge end users for the heat they use.

These boilers rely on a supply of dried chips or pellets to operate properly, so RES has set up supply chains to ensure that good-quality fuel is delivered to its customers. But using waste wood is more problematical. For example, green tree waste needs to be dried and chipped and there is no supply chain in place for this. This will probably emerge once demand increases but burning waste timber can be problematic, as it is often contaminated and causes pollution. “Timber contaminated with paint and preservatives can’t be put into boilers,” says Tolfts. “There are large units available now but the technology that allows this to be burned in smaller units is three or four years away.”

Biomass-powered CHP is not an option at development level either. The biomass-fuelled CHP unit at BedZed famously never worked and, despite the fact that BioRegional says it has found a solution, RES doesn’t offer a CHP option. “CHP only works on a larger scale,” says Turner. The smaller units are rather agricultural and not suitable for developments.”

The widespread adoption of biomass could also be a problem in cities. “There are a lot of negatives associated with it, particularly with high-density inner-city developments,” says Appleby. The first problem that it produces much more nitrous oxide than gas, and that is classified as a pollutant. “There’s also the amount of storage you require. Then there’s the deliveries: a substantial plant would need up to 10 a week.”

These problems have encouraged Appleby to look for another solution, which involves turning biomass into a gas. A process called pyrolysis heats up the fuel in the absence of air and produces a gas, known as syngas, and oil which can be used to run the plant. A second method is to produce biogas from organic matter. According to Appleby, pyrolysis produces less pollution and is more efficient than combustion and it can help get rid of domestic rubbish, which is growing a huge problem. “I think the future will be large-scale gasification plants,” says Appleby.

Another advantage of gas is that it can be piped conventionally into homes where it can power gas boilers, and it can be used to run CHP plants, too. URS is working on two pyrolysis plants producing 10MW of electricity for the Lea Valley in London; these will require 90,000 tonnes of biomass and rubbish a year.

Merton council, which has been pioneering the 10% onsite renewables requirement, is also looking at the pyrolysis option. Adrian Hewitt, Merton’s principal environment officer has concerns about biomass, although he is keen to stress that these are personal views. They include the suspicion that people will use their backup gas boilers as the main source of heat rather than biomass, whereas photovotaics (PV) produce power without the end user having to do anything, and is carbon negative rather than carbon neutral. He says: “The problem with biomass for me is that you have to pay the cost of the boiler and the woodchips for the next 40 years. If you put a PV panel on the roof you don’t have to do diddly squat for the next 40 years.” He adds Merton will turn down biomass as an energy option if it isn’t appropriate. “If it is going to introduce an unreasonably large number of deliveries a week and there was a traffic pinch point plus lots of people living nearby no, we wouldn’t accept it.”

Merton is living up to its reputation as an environment-friendly council by blending the pyrolysis technique with the approach adopted by Woking council, which set up a renewable energy company and sold electricity to locals.

It is working with English Partnerships to build a pyrolysis plant funded by venture capital, which will run a CHP plant to generate electricity and heat for homes from waste wood. Hewitt says funding is not an issue. He says, “There’s no shortage of people who will pour money into it”. This is because Merton will have a ready market in that developers would have to connect to the facility to get planning permission, and excess electricity could be sold back to the grid at an extremely favourable rate.

In the future Merton could build a plant to get rid of domestic waste and generate money from it rather than having to pay to have it taken away. Hewitt is certainly optimistic. He says, “Twenty years from now there are going to be all these people with these Heath Robinson biomass boilers clogging up their bin stores.”