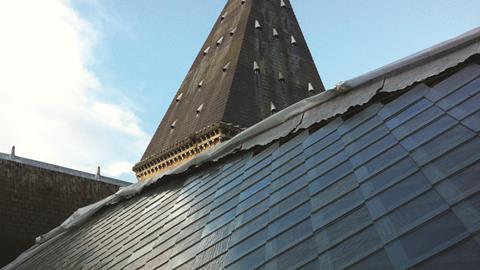 The Oxford Natural History Museum has been plagued by water dripping through its roof since its completion but after years of buckets and botched jobs one architect has finally solved the problem. Building finds out how you fix a 154-year-old leak

After 150 years the staff of the Oxford Natural History Museum can finally throw away the collection of buckets needed to collect water dripping from the building’s leaking roof. The museum has an unusual glass roof that leaked from the day it was completed in 1858 and still leaks today despite various attempts to fix it. The roof is difficult to fix as it is made up of overlapping, square glass tiles similar in construction to a slate roof. These were cast by pouring molten glass into a sand mould resulting in an uneven tile. “Because the glass wasn’t flat and varies in thickness the tiles don’t sit on each other properly so rain gets blown through the gaps,” explains Nicholas Bradley, senior architect with Purcell Miller Tritton, who has been charged with finding a solution. A secondary problem is condensation on the underside of the glass that drips into the museum.

Bradley says the museum has spent six years trying to crack the problem. It has experimented with glues and sealants in a bid to seal the gaps between the tiles. There have been two problems to overcome; firstly the angle of the roof means it gets a high dose of ultraviolet light, which destroys adhesives. The second problem is getting anything to stick to the rough surface of the glass. The solution is to seal the gaps using Dow Corning’s 791T translucent silicone which sticks to the glass, and is flexible and waterproof. The museum also wanted to incorporate acrylic gutters on the underside of the roof below the joints to catch any water that made it through the sealant but Bradley argued this should be scrapped as he felt it wasn’t necessary and was more complex.

How it was done

The building has three connected roofs and is covered by 8,566 glass tiles that are 500mm by 500mm and 8mm to 12mm thick. The tiles are screwed to timber battens fixed to timber rafters which in turn are supported by cast iron columns. The tiles are hung in a diamond pattern, two corners of each tile have been cut off so these butt up against neighbouring tiles on the horizontal. When a tile is laid a bead of silicone is applied on the two upper most diagonals of the tile then two tiles are laid on top. Because the silicone bead sits some 65mm away from the edge of the tile above it is protected from the worst of the weather. The gap between the cut-off corners is also filled with silicone. Finally another tile is laid so it sits directly above the first tile, this also overlaps the two horizontal tiles. This results in a small air gap one tile thick that allows air to circulate into the building that should help prevent condensation. It will also allow any condensation that does accumulate to drain out from the underside of the roof. “As long as the roof can breathe the relative humidity should be the same inside as well as out which should take care of the condensation problem,” says Bradley. 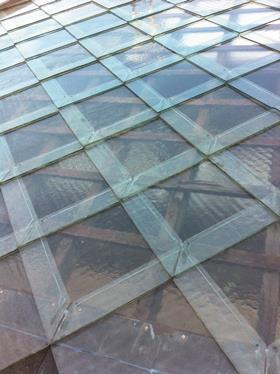 A finished area of roof. The silicone bead that weatherproofs the roof is clearly visible. It is set 65mm back from the edge of the glass tile sitting on top so it is protected from the weather. A break in the silicone bead at the bottom of each tile allows air to circulate into the building, which helps prevent condensation

The work is being done by contractor Beard who is tackling the south roof section first. The first job was to protect the exhibits below by encasing these in wooden boxes. Scaffolding has been erected under the roof section to enable Beard to clean the iron structure and timber rafters and battens. This scaffolding also protects the exhibits from falling objects and acts as a secondary waterproof layer. A tarpaulin made up of sections sits over roof and acts as the primary waterproof layer. Sections of it are lifted out of the way as work proceeds. The tiles are cleaned in a little workshop erected on the roof. “We didn’t want to take the tiles off the roof because of the risk of breakage and it is quicker,” explains Steve Colmer, the special works manager for Beard.

Both sides of the roof are stripped at the same time to ensure the structure isn’t loaded unevenly. The tiles are removed by cutting through a silicone joint applied previously in a bid to fix the leakage problem. Two screws holding each tile down are removed and the tile put into a special backpack used to ferry the tiles over to the rooftop workshop. A safety film has been previously applied to the top side of each tile and has to be removed along with the silicone residue. This is done by soaking the tiles overnight in a solution of glass cleaner, water and methylated spirit. Next day the silicone is easily scraped off and a scouring pad used to clean the tile up ready to be reinstated on the roof.

Holes are drilled ready for the fixing screws. Beads of silicone are applied with an electrical dispenser. The tile is carefully placed so it overlaps the tiles underneath then screwed down. The safety film isn’t being reinstated as this should go on the underside of the tiles. The museum was concerned the film wouldn’t stick properly to the rough surface of the tiles and come off, resulting in a maintenance problem.

Inevitably some tiles have been broken during the roof’s 150-year history and have been substituted by a mix of Georgian wired glass and the obscure glazing used for bathrooms. These needed to be replaced by tiles replicating the originals. These have been made by making up a ceramic mould from an original tile. Modern 10mm thick float glass is put into the mould then placed in a hot kiln.

The first roof section is two thirds completed and will be finished in mid February. Bradley and Colmer say it looks amazing and will result in a brighter museum as it will let much more light in but hopefully no rain. 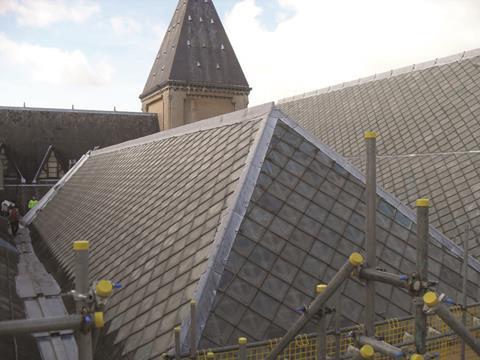 Before restoration the roof leaked and was dirty