Campsmount college was rebuilt through a pilot scheme for cost saving reforms after a devastating fire - did it pay off? 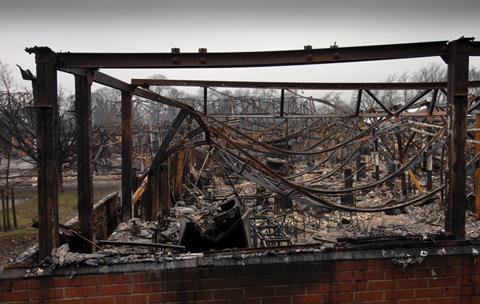 When the fire service eventually managed to put out a blaze that ravaged Campsmount Technology College in Doncaster back in 2009, the scene that remained was one of devastation.

“There’s an awful lot of twisted metal, there’s an awful lot of ruined classroom equipment and probably across quite a large part of the site, there’s very little apart from the steel structure that stands,” Richard Chandler, area manager for South Yorkshire Fire and Rescue Service, told reporters the morning after the blaze. The efforts of 60 fire fighters had managed to save some structures, including the gymnasium and the library, but the rest of the school was, in Chandler’s words, “In a very sad state, on the border of being gutted.”

the disruption threatening to undermine their learning, the school, local authority and the government’s then schools delivery body, Partnerships for Schools, formulated a plan to bring forward money due to be spent on Campsmount under the Building Schools for the Future (BSF) programme, to enable the school to be rebuilt.

But just as the parties neared an agreement, another blow was struck. The new coalition government’s decision in June 2010 to halt the £55bn BSF scheme meant the plan could not go ahead. Headteacher Andy Sprakes recalls: “We were in limbo. We had been days away from signing a contract, and suddenly the project was in jeopardy.”
In the weeks that followed, Sprakes persistently lobbied the government over the issue, with the result that officials from the Department for Education offered Campsmount the opportunity to be a pilot scheme for cost saving reforms being suggested by Sebastian James, the head of Dixons charged by the government with carrying out a wide ranging review of schools capital programmes.

Eighteen months on, the rebuilt school has opened its doors in a structure built by Wates, and the project being is being used by Partnerships for Schools’ successor body, the Education Funding Agency (EFA), to set the standard for a new wave of school building projects. Here, we look at how the project was delivered, and how far the techniques and strategies used can be applied to future school building schemes, including the £2.4bn Priority Schools Building Programme. 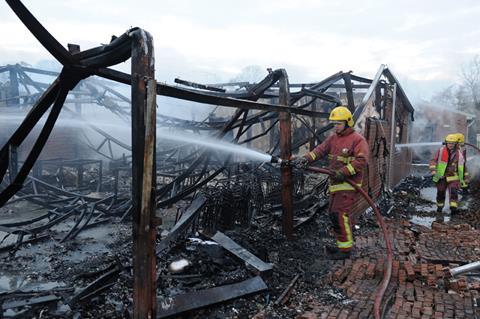 A fire in 2009 gutted most of Campsmount Technology College in Doncaster. At one point 60 fire fighters were on the scene, managing to save the gym and library buildings

The first aspect of the Campsmount scheme that differed dramatically from BSF was the procurement process, which was completed in under half the time of typical projects - 21 weeks compared with up to 48 weeks.

With the aim of fast tracking the project, Partnerships for Schools cut each stage of the procurement time. The PITT submission stage was one week, with another week for assessment. ITT stage was six weeks, with one week’s assessment, and the time between appointing a preferred bidder and reaching financial close was 12 weeks.The compressed timeframe was achieved partly through a reduction in the opportunity for stakeholder engagement. Sprakes says: “Once we were into the process, engagement was limited and that was a challenge. I felt we needed more, but we found ways around it by being flexible in how we worked.” This included having quick updates on aspects such as floor plans in unrelated meetings with the contractor.

Sprakes says that there was inevitably a challenge for contractors in understanding the school’s needs in such a short space of time, but says that despite this, he “Felt our involvement was quite high. We had more ownership than you might expect.”

This manifested itself most heavily in Sprakes’ set of “non negotiables” for the new building: he wanted a robust building, with a steel structure to aid flexibility and concrete floors to help with acoustics. He also wanted the building to be easy to maintain, have good circulation and social learning spaces, and - a wish from the pupils - “nice toilets”.
Sprakes believes that the realism over these demands was crucial to the project’s success: “We were clear on our vision, but we were also pragmatic and realistic about the fact that these are austere times.” He says that the school had to be clear about what were the most important outcomes: “One official told me we wouldn’t be able to have gold taps, and I said ‘I don’t want them. I want ones that work.’” 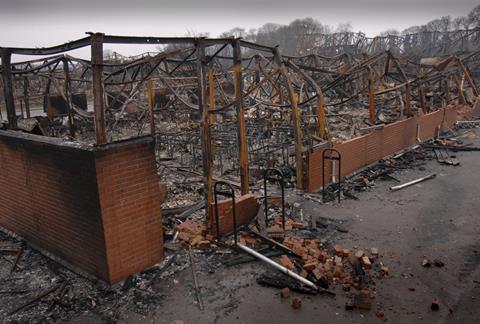 The decision to appoint Wates as the contractor for the building was prompted partly by the fact that the contractor suggested a design early on in the tendering stage that “hit the mark”, according to Sprakes. Wates’ design, developed with architect CPMG and consultant Capita, was based on work it was already doing on its Adapt concept.

Sprakes says: “I was quite happy that some things would be standardised to a degree. To me, schools are unique places and they need to be, but that can be achieved with some parts being standardised. I was also aware that Wates would bring its expertise from other projects.”

Steve Beechey, head of education at Wates, says that the savings were achieved as a result of two main factors - first, a reduction in the output specification given by Partnerships for Schools, and then the “kit of parts” approach to the building used by Wates.

“Partnerships for Schools trimmed the output specification significantly”, he says. One major change was a reduction in area standards - the school was around 15% below BB98, which is also the anticipated level for new requirements for the Priority Schools Building Programme.

In terms of how Wates delivered to the brief, Beechey says: “We looked at the most efficient design. We haven’t used massively innovative technologies - it’s not like something out of Star Trek. We’ve used tried and trusted techniques in a cost efficient manner.” He adds that it was possible to include sustainable measures for the cost: the school has PV panels on its roof, and has achieved a BREEAM rating of “very good”. 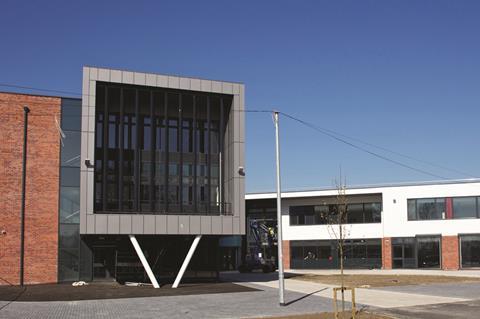 Wates suggested a design early in the tendering process for the new Campsmount building (above and below). It was based on its Adapt concept and elements of the design could be standardised so that costs were reduced to £1,500/m2 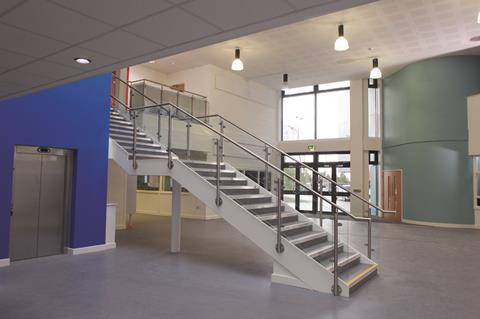 What can be learnt

It cannot be denied that the circumstances around the Campsmount project were unique. The site had been virtually flattened by the fire, and the children, already being taught in temporary accommodation by the time the project started, did not have to be relocated for the scheme to begin. Beechey, however, insists that the techniques used and savings made on the project are “very applicable” to other schemes.

“The landscaping was slightly easier, but we still needed to redo all of the playground,” he says. “The only other difference really was that the only part of the school that didn’t burn down was the sports hall, so that was just refurbished. So yes, we think the project is comparable.”

For his part, Sprakes acknowledges that because of the school’s planned inclusion in the BSF programme, and the fact it was working towards BSF funding being brought forward after the fire, it was better prepared than some schools may have been. “We had done a lot of work on what we wanted from the building,” he says.

But equally, he believes that the project was only successful because the school was willing to accept advice from experts on the construction team. “We took expert advice from the local authority and the contractor, but without compromising what I’m an expert in, which is learning,” he says. “So we were able to work very effectively.”

Wates has now secured deals to use its Adapt concept on other projects, including several schools in Nottingham. Beechey says that the contractor “is still refining and improving the offer”, and says for the kind of cost and time savings used on Campsmount to work, “one of the key things is managing stakeholders, and being very clear on the output specification.”

Sprakes agrees, but says that overall, clients and supply chains “need to be mindful that we don’t compromise on quality, and we need to be careful on space standards.” He adds that Campsmount was able to increase the amount of space available by contributing some of its own funding, and stresses the benefits that adding even a small amount of their own funding can bring to schools.

Ultimately, Sprakes says that the limitations Campsmount needed to accept to be a pilot scheme - cost reductions, and some cuts to area - were definitely outweighed by the benefits to pupils in having the scheme built. “The building’s great,” he says simply. “It’s got flexibility and adaptability, and the quality of finish is very high. And really, the kids are just pleased to be in a real school again.”

The £2.4bn Priority Schools Building Programme, the government’s successor to BSF, will involve the rebuilding or refurbishment of 261 schools. The list of schools to be included was published in May.

Key facts of the scheme are: