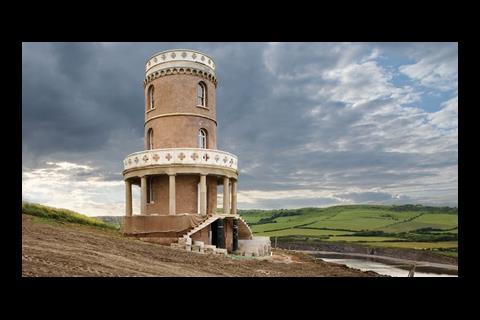 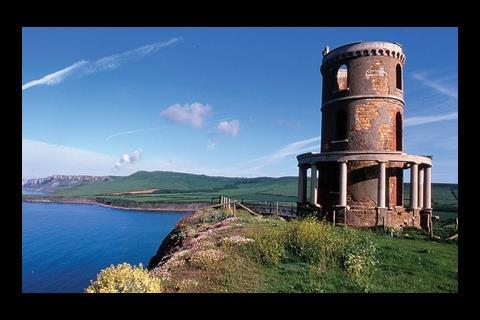 The ruined tower perched on the cliff edge before work started 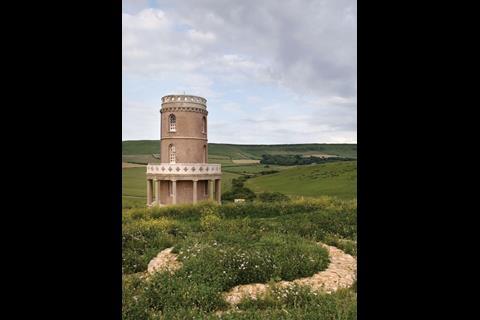 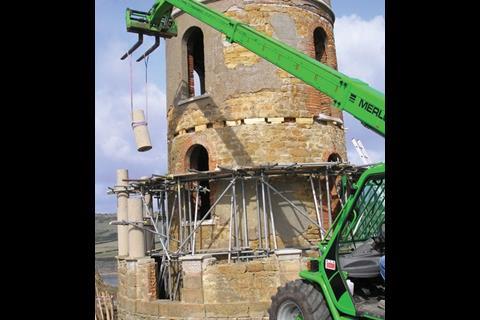 The tower was carefully dismantled 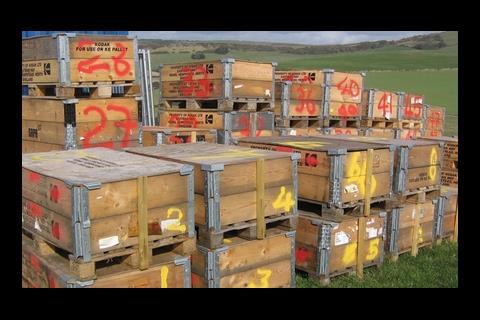 The stones numbered and placed in crates 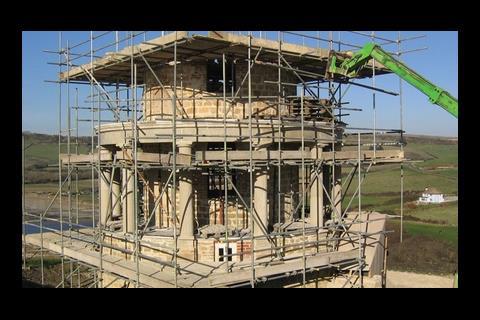 Rebuilt exactly as it was

A glazing bar found in the debris showed the windows were flat rather than curved. The parapet is new and was recreated from photographs, but building control isn’t happy with its height so an additional handrail may be needed 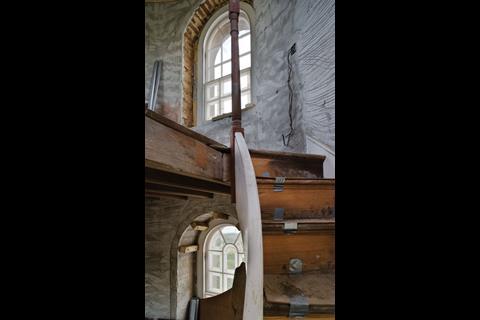 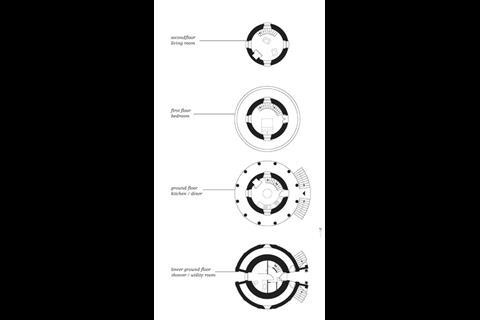 It was a race against time to save a tiny piece of heritage on the Dorset coastline by painstakingly moving it away from the cliff edge stone by stone.

For years it seemed inevitable that Clavell Tower’s fate was to slip from its clifftop prominence and crash ignominiously into the sea below. Perched just four metres from the edge of Kimmeridge Bay in Dorset, the tower had stood abandoned for more than 80 years, with only passing walkers and sheep for company, while the cliff steadily eroded beside it.

Despite its unassuming appearance, the tower had historical significance and was a grade II-listing. Built in 1831 as an observatory for a local clergyman, it was the inspiration for novelist PD James’s thriller The Black Tower and the Thomas Hardy poem She to Him. For decades, boats at sea had used it as a landmark and walkers, as a place to rest. Even so, the tower’s journey to oblivion seemed inexorable.

But in 2001 the tower was thrown a lifeline, in the form of a rescue campaign by local people. The campaign managed to raise £898,000 in seven years through grants and appeals. “It was a bit of a race, as the cliff kept moving,” says Carole Paton, surveyor with the Landmark Trust, a charity that rescues unusual buildings under threat. “Nobody knew if it would last five years or 20.”

But raising the money turned out to be the easy part. “It is one of the most complicated projects I have come across,” says Adrian Stenning, project manager with quantity surveyor Bare, Leaning & Bare, charged with saving the tower.

For one thing, the building was in very poor condition having been gutted by a fire in 1923 – the walls were cracked, the roof and windows were missing and the whole structure was leaning over towards the sea. Carrek, the contractor responsible for the work, worried that if the tower crashed into the sea, its team could end up joining it.

Furthermore, the rescue plan had to be carried out in severe weather conditions, with wind speeds on the edge of the cliff reaching 70mph. On top of this, there was only limited access because the tower was on a world heritage site.

The team explored several options to stop the tower from falling. The first was to stabilise the cliff to stop it eroding, but this was rejected. “It was too expensive and difficult and there were no guarantees it would work,” says Paton.

The second option was to underpin the building with long concrete beams anchored in solid ground, but that meant the tower would have been left hanging in space as the cliff eroded further. The third was to move the whole tower away from the edge, but it would have required a lot of structural work to enable it to withstand the move. The final option was to dismantle the tower and rebuild it inland. “This seemed to be the most economic solution,” says Stenning.

It may have been an economic approach, but it was also very unusual. The building’s listed status meant the team had to think about whether consent was needed to dismantle it and whether it would still be listed once it was rebuilt. After much debate with English Heritage, listed building consent was granted on the condition that the building was re-erected in identical form.

English Heritage wanted to ensure every single stone went back in exactly the same place, so it was effectively the same building. it was a listed building even when it was in crates

“English Heritage wanted to ensure every single stone and brick went back in exactly the same place, so it was effectively the same building,” says Stenning. The building stayed listed throughout the job, he says, so “it was a listed building even when it was in crates”.

Even though it had permission to proceed, the team’s problems weren’t over. It had agreed to rebuild the tower exactly as it was, but because local building control saw it as a new structure, the tower was subject to current Building Regulations. “We tried to make it as compliant as possible because the regulations were sensible, but there was always going to be a conflict between keeping the original building as it was and meeting modern regulations,” says Stenning.

He adds, however, that the local building control authority was very understanding about the project most of the time. For example, it allowed walls to remain uninsulated – just as well, as the internal diameter of the tower was only 4m. However, the new roof and floor were insulated, the stairs were widened and the openings at the top made bigger so people didn’t bang their heads on the ceiling when climbing up.

The main argument with building control was about the height of the balustrade on the edge of the walkway around the first floor. This was 940mm high in the original structure, but regulations now required a handrail of 1,100mm. “That was difficult because it meant changing the building,” says Stenning. This is still to be resolved, but if building control insists on 1,100mm, an additional handrail will be installed.

As much of the building was missing, ensuring it was rebuilt exactly required a lot of research. This included trawling through debris inside the tower and examining local buildings designed by the same architect, Robert Vining.

The parapet to the walkway was suspected to have been stolen. The Landmark Trust offered an amnesty for its return, but nobody came forward, so it was rebuilt using old photographs. “We were as true to the architect as we could be,” says Paton.

The team had more luck with the column that was supposed to support the stairs up to the tower’s front door. “I found one being used as a bird bath support,” says Douglas Brown, contractor Carrek’s project manager. There was much debate over whether the missing sash windows were flat or curved. “Eventually a glazing bar was found in the debris, which was horizontal and clearly flat, not curved,” says Stenning.

One of the biggest challenges was working out how to ensure every stone ended up in the right place. “This gave me quite a few sleepless nights,” says Brown. A technique called photogrammetry was used, which involved stitching together lots of close-up photos of the tower walls to allow the team to view it as a flat form.

The team briefly considered taking down components from the original wall and lying them flat on the ground, but in the end Carrek proposed marking out a grid on the wall and numbering each stone. The building could then be dismantled and the stones placed in crates. “We knew where every stone would go, even though they were lying in crates in a field,” says Brown.

On site the wind speed would be 70mph. There were days when we couldn’t do anything. With hindsight we should have stopped work in the winter

When it came to reassembly, the numbers showed where each stone was in relation to the others and the grid ensured the distance between them was correct.

Armed with this plan Carrek wanted to make sure the dismantling operation would be safe. “We had to consider how we’d take the tower down so it wouldn’t collapse while we were working,” says Brown. He was considering dangling workers off cranes parked on solid ground, before a geological survey of the cliff showed it was safe.

In June 2006 work finally began. Scaffolding was erected and each of the 16,272 stones removed, with a number engraved on top to ensure it could not get rubbed off, then placed in a crate.

As the winter drew in work slowed down and Brown discovered why the building was known locally as the “tower of the winds”. “On site the wind speed would be 70mph because it was on the edge of a cliff,” he says. “There were days when we couldn’t do anything. With hindsight we should have stopped work in the winter.”

It took until the end of April 2007 to finish dismantling the tower, far longer than Carrek had envisaged. Simultaneously a new base was prepared 25m inland, out of reinforced concrete, because the ground sloped and there was a risk that the tower would slip down the hill.

Work then started on rebuilding the tower. Hydraulic lime mortar was used for the stonework. This was rendered using lime rather than the original “roman” cement. The reddish look was recreated by tinting the aggregate before mixing it with other materials. New Portland Stone was used where the original stone was missing or badly damaged.

The building is due to be ready by September but already looks like the perfect retreat – the location is remote with stunning views over the downs and the sea. Internally, a shower room has been created on the lower ground floor and a kitchen and diner on the ground floor. The bedroom is on the first floor, with a living room above.

Already it is proving to be one of the trust’s most popular properties – it is already booked up to the end of the year. But Paton says there’s no cause to panic, as there’s plenty of time to visit the building – it’ll be at least 150 years before it is perched on the edge of the cliff again.

The tower was built in 1831 by local clergyman John Clavell as an observatory and folly. It was then passed, through marriage to the Mansell family who own it today. By the end of the 19th century it was being used by the coastguard as a watch tower but it fell into disuse between the two world wars and was gutted by fire in 1923.

It has been a ruin ever since but during the 20th century was still visited as a landmark. A local campaign was started in 2001 to save the building with the support of author PD James. In 2003 the Landmark Trust became involved – turning the building into a holiday home seemed the best option as the rent would pay for the building’s upkeep. A £436,700 grant from the Heritage Lottery Fund in 2005 provided the bulk of the money to turn it into a property that can be rented for holidays.