Sikh place of worship: The gurus of Gravesend 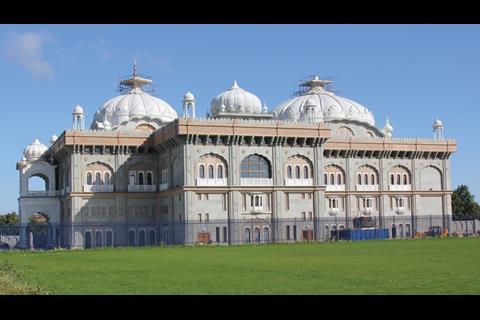 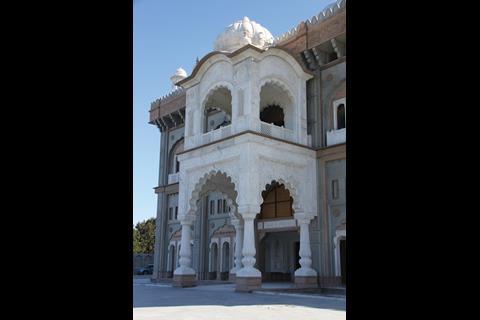 A cash-strapped project to build a Sikh place of worship in Gravesend procured the large marble domes, arched windows and highly ornate stonework from India - and saved more than £2m along the way

Even putting its striking appearance to one side, you still couldn’t describe the gurdwara in Gravesend as a conventional build. As a place of worship for the UK’s third-largest Sikh population, the project has been on site for the best part of eight years. When it started there was only enough money to complete the foundations; the rest of the cash still had to be raised, most of it from donations. And to get the best value for money, and keep control of the complex project, the local community set up its own construction company.

Added to all this was the intricately detailed stone cladding.

Teja Biring, a partner in Calford Seaden, the architects behind the gurdwara (door to the guru), says: “The community wanted a very traditional-looking building.” As a result, it incorporates plenty of the design cues of a traditional gurdwara such as the five large marble domes, the arched windows and the Indian motifs which embellish the stonework. Procuring such an ornate design was always going to be tricky given the tight budget, and it quickly transpired that the best way to achieve the traditional detail at a realistic price was to obtain the stone, already carved, directly from India.

Teja Biring, partner in charge at Calford Seaden, spent two weeks touring India until he found a company capable of handling the project. Trivedi Tectonics based in Ahmedabad in western India had expertise in hand carving and also the CNC machine tools to cut and carve large quantities of stone, which was a must if the project was going to complete in the next decade.

It also had its own marble quarry. However, Biring had concerns about using marble because of the UK climate and the porosity of the stone. “I was looking for a life expectancy of 100 years plus, like a church or cathedral,” he says. For this reason a mix of pink and grey granite has been used for a large proportion of the building, particularly where weathering might be an issue, such as ledges. Marble, easier to work with, has been used where there is intricate detailing and to create the traditional covering for the domes. 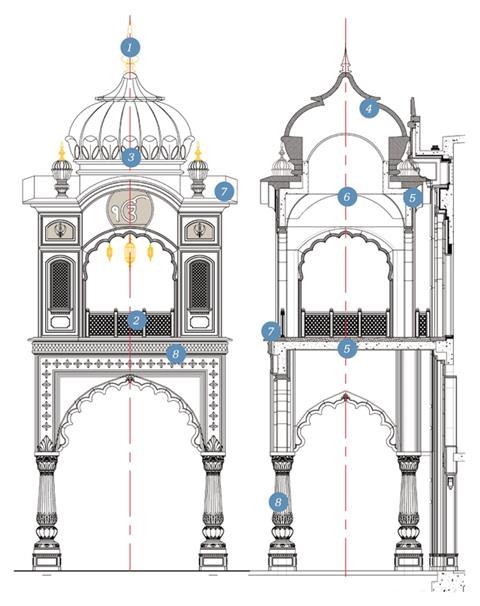 The structure of the Gravesend Gurdwara has been kept simple to make it cheap and easy to build. It uses conventional insitu reinforced concrete clad with ready carved granite and marble panels. The entrance porch is one of the most detailed sections of the building, bringing together intricately carved columns, marble Jali windows, traditional Indian motifs and a marble clad dome.

To ensure value for money and keep control of the project, the local community set up its own construction company, GNG Construction. Each package of work was let separately and it also meant they were able to draw on construction workers within the Sikh community. To keep costs down and capitalise on this local labour, Biring was keen to keep the build as simple as possible.

The building itself is formed out of cast insitu reinforced concrete and the stone panels have been designed so that they are loadbearing like the outer skin of a cavity wall. Each stone section rests on top of the other, bonded with an epoxy resin to make it weathertight and tied back to the concrete structure with stainless steel ties. Between the concrete and stone is a 100mm cavity filled with high-performance insulation to meet Part L requirements.

Taking the CAD drawing produced by Calford Seaden, the stonemasons in India produced detailed designs and then set about cutting and carving the stone. Mark Stott, project architect, describes the results as being like a giant Airfix kit. The solid stone is cut to size, shaped and carved, then given a reference ready for assembling when it arrives on site. The columns, for example, are carved out of a solid piece of stone and then bored and cut to wrap around a conventional reinforced concrete column. The thickness of the stone varies, but a minimum of 40mm was set for flat panels increasing to 200mm for the larger, more ornate sections, some of which weigh close to a tonne. Because of the weight of the panels, stonemasons from India came over to help with the installation, to avoid chipping and damaging the edges in transit, and also so that they could make any adjustments or changes that might be needed on site.

The project has come in at £13m, with the stonework, including the flooring and landscaping, costing £2.7m. Procuring the stonework for the facades alone in the UK would have been in the order of £4.5m, without the intricate detailing.

A building like the Gravesend Gurdwara is rare and unlikely to be repeated, and this way of working won’t suit many clients, but Biring argues that the way they have procured the stonework - and the ornately carved timber come to that - is a lesson for others. “You need to hold your nerve and everything has to be made and shipped but if you have got the time it can be achieved; you just need to plan ahead.” 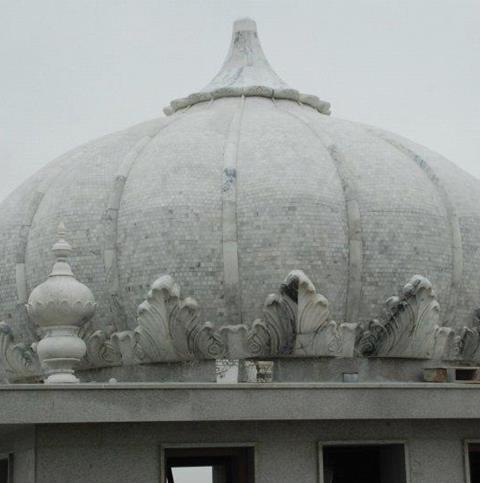 Domes
There are five domes on the gurdwara, exposed on the inside and ranging in diameter from 6m to 18m. The “onion” shape is constructed using sprayed concrete with an insulation core. Externally they are covered in square marble tiles with the ribs picked out in curving solid marble sections, while marble petals decorate the edges. Inside, the domes are lined with specially-commissioned glass mosaics. Each of the four main domes has its own unique design and colour scheme while the dome over the entrance has a carved and vaulted ceiling. 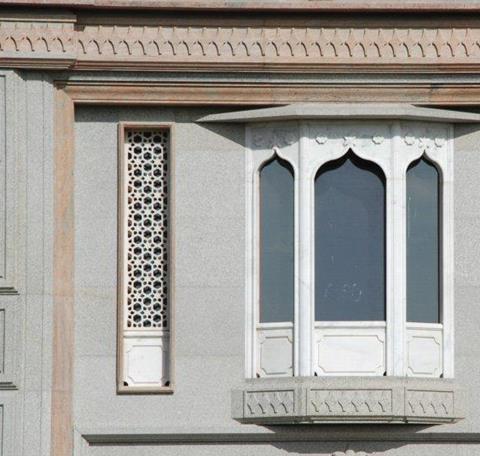 External cladding
The outside of the building is clad in granite and marble - the granite was selected for its durability. The details around the doors and windows are picked out in finely carved white marble.
The porch and veranda provide a focal point and so is clad entirely in finely carved white marble with inlay panels and bas-relief images of historic gurdwara buildings. Inside, the floor iswhite marble, inlaid with coloured marble in a traditional pattern. 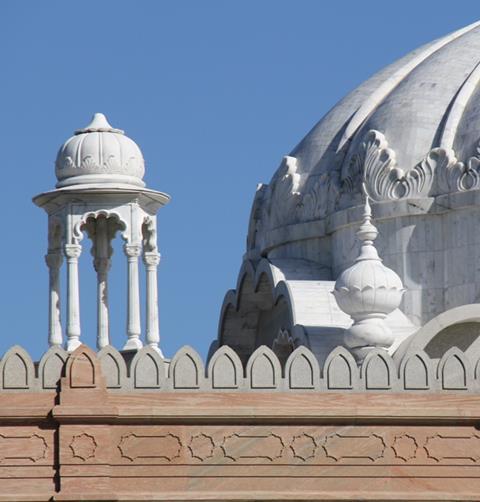 Parapet
The parapet of the building with the corner turrets is another important feature of the building. This is created using pink and grey granite, which is hard-wearing but much more difficult to carve than marble. Although it looks like it is cantilevered, the granite supports are actually decorative rather than structural.