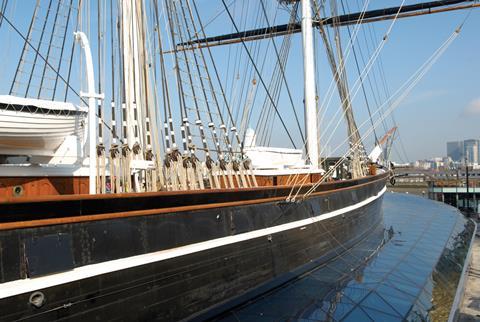 This is proving a busy year for the historic south London borough of Greenwich. After recently having its civic status elevated by the Queen for her diamond jubilee celebrations, it is now one of only three royal boroughs in the capital. During this summer’s Olympics it will host more venues than any other London borough outside the Olympic park. Its renowned maritime museum - the world’s largest - has recently opened a prestigious new wing. And its magnificent church of St Alfege, the only south London church of the great baroque architect Nicholas Hawksmoor, is also celebrating its 300th birthday. 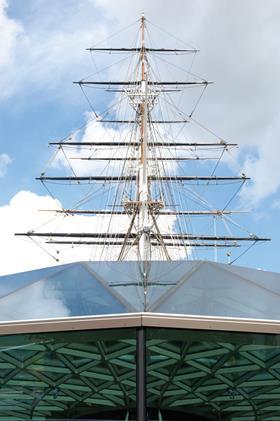 But one seminal event promises to eclipse all of the above: the long-awaited reopening of one of the world’s most famous ships, and its last surviving tea clipper, the Cutty Sark. After a laborious eight-year restoration programme disastrously punctuated by a huge fire in 2007, the much-loved ship has been officially reopened by the Queen this week.

But the £50m project involved far more than conservation alone. The Cutty Sark itself has indeed been painstakingly restored and preserved to a standard that should ensure its survival for at least another half a century. But it now finds itself at the nucleus of a radical contemporary architectural intervention that promises to transform both the setting and perception of the iconic vessel.

The core element of Grimshaw Architects’ ambitious plans for the Cutty Sark has been to raise it 3m from the floor of the dry concrete dock in which it has been berthed since the fifties. This subterranean void is now a cavernous visitor and exhibition centre, crowned by the giant spreading hull of the ship overhead.

The remainder of the space above is enclosed by a diagrid glass canopy that extends from the rim of the hull to the former dock edge. It overlaps substantially over the southern edge of the dock to create an entrance lobby at ground level. The glazing is also solar coated to protect the ship from summer heat.

The ship itself is supported by 24 giant steel cradle struts that extend diagonally from the upper rim of the dock to just below the uppermost waterline of the ship’s hull. New internal compression beams then extend inside the ship between the cradles, providing rigidity to the hull and helping to arrest the severe warping and deformation of the 183-year old vessel that had been taking place prior to the restoration.

Crucially, all of the new structure, including the canopy and the bridge that extends from the new foyer to an entrance cut into the side of the hull, is self-supporting. No new loads are imposed onto the ship and the only incursions onto its fabric are the supporting struts and bridged hull entrance. The canopy structure has also been designed to accommodate the inevitable wind movement of the ship prompted by its giant 100ft masts.

As Grimshaw project architect Den Farnworth explains: “The lifting accomplished two things: it allowed us to insert new structure into the ship to stop it from further warping and deforming. And it also provided the opportunity for new museum space in the void underneath the ship. Previously, any exhibition or interpretive space had to be squeezed onto the internal decks where space was already at a tight premium.”

Passing beneath the 963-tonne ship presents the visitor with electrifying visual tension, as if the proverbial “ship in the bottle” has broken free and, in an equally improbable matter-defying stunt, is now suspended insolently in the air. The new muntz alloy in which the hull is clad - closely matching the hull’s original metallic skin - adds to the theatricality of the experience by transforming the base of the Cutty Sark into a glistening golden ark, preciously preserved within a glass case. 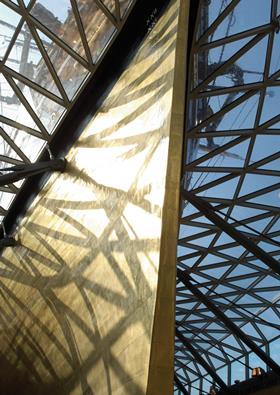 All these structural contortions do exactly what they should do: they detract attention from themselves and focus it utterly on the Cutty Sark. Even the thrusting cradle struts oscillate gracefully to follow the curve of the hull, shooting out like oars to enable the ship to further dominate the space below. It is all a thrilling and perhaps unlikely synthesis between technology and conservation that indisputably enhances the power of the Cutty Sark’s physical presence.

Inside the ship, the rigorously enforced theme of a clearly defined differentiation between new and old structure continues. A deck has been constructed within the hold in which the bulk of the ship’s cargo was once stored, and is entirely supported from the new restraining structure inserted to support the hull and keel. New steelwork is grey while the original ironwork, much of it crumbled like intricate lacework at its edges, is clearly painted white. New stainless steel handrails throughout the ship also act as an intuitive wayfinder and two staircases have been carefully inserted into existing hatches.

Outside, on the uppermost deck, the fully restored glory of the ship is joyously on show. The soaring masts rise majestically above beautifully polished floors and gleaming, varnished cabins. Luckily, many of these original fixtures had been removed for storage prior to the 2007 fire. Equally evident are the magnificent unfolding vistas of the Thames and surrounding Greenwich townscape. A new circulation tower constructed beside the ship also comes into view. This has been designed to provide direct access from the subterranean exhibition space to the ship’s prow and is linked to the top deck by a cantilevered bridge that once again is structurally independent.

Externally from ground level, the Cutty Sark’s glass canopy rises and bulges at either end as if the ship has been caught in the swell of a wave. At night the interior is illuminated to allow uninterrupted views of the glowing ship’s hull. The rejuvenated scene is completed by a newly landscaped square that surrounds the ship.

The only detraction from this setting is an unfortunate string of cafe pavilions that have been constructed between the Cutty Sark and the Thames. It is beyond belief that Greenwich council granted permission for these tawdry containers that block the critical view from the ship to the river. The decision is all the more inexplicable in light of the huge efforts that the architects have exerted to raise the ship and make it more visible from surrounding areas.

Greedy and abysmal planning aside, the sheer structural and design ingenuity of the new Cutty Sark forms an exhilarating architectural spectacle, deftly combining historical deference with a fearless sense of cutting-edge technological ambition. In so doing, not only has the cherished legacy of a beloved ship been secured, it has been vigorously and imaginatively revitalised.