Stanton Williams: The Attraction of Opposites 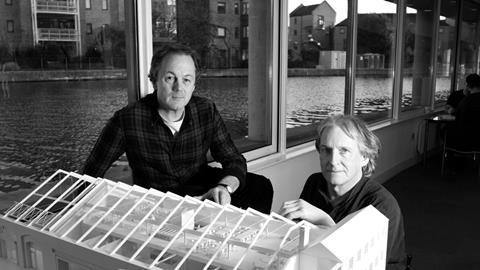 Architect Stanton Williams is a company that likes to be different - so when its profit plunged by 90% at the start of the financial crisis it didn’t do what so many other architects are doing and look abroad for work. It decided to stick with what it knows best: the UK. Building reports

De-cluttering is either the happy by-product or the sad symptom of technological advancement - depending on how you look at it. Over the last few years, even the most chaotic of offices have become sleeker as computers and gadgetry have eliminated the need for much of the paraphernalia once harboured by the profession - particularly architects. But not everyone is prepared to give it up that easily. Few offices are as exuberantly content to run counter to the modern trend for technology-inspired orderliness as those of architectural practice Stanton Williams. The north London headquarters at Grand Junction Wharf is strewn with models and building materials. Books, papers and plans are scattered about the place along with the odd scalpel or piece of twine. And the canal, lapping up the sides of the building at window ledge height, adds to the relaxed, bohemian feel. This is a traditional, artistic space - one that Alan Stanton and Paul Williams feel strongly about.

“Technology is important but it is just one tool,” explains Williams. “We are not great lovers of the flat screen here. We want to get our staff off the computers and onto tables designing models. That’s what we are here - physical model makers. Still. And that’s what makes us different.”

It’s not the only thing that makes the 50-strong, £4.7m practice different. Stanton and Williams, who set it up in 1985 and were joined by three other directors, Gavin Henderson, Patrick Richard and Peter Murray in 2006, have been bucking the trend for the past 26 years. With a strong background in designing for the arts - museums and galleries are their forte - they have always been more engaged with interior rather than exterior design, quite something for a practice charged with designing an Olympic venue. And unlike practically everyone else in their profession, they have no intention of shifting their focus away from working in the UK and chasing a plethora of opportunities abroad.

Whether this will turn out to be a successful strategy, no one yet knows. An annus horribilis that followed a 90% fall in pre-tax profit for the year ended September 2008 would in any case suggest that the strategy is fraught with risk. Yet turnover has remained relatively stable, dipping to £3.8m in 2009 but back up now to £4.7m. Profit recovered slowly, reaching £64,551 for the year ended September 2010. The firm’s current and pipeline projects also look healthy, including Eton Manor - the London Olympic venue for wheelchair tennis due to complete this month - and stores for Japanese designer Issey Miyake. And besides, Stanton and Williams insist that being different is one of the vital keys to their success.

Not following the crowd

A 90% plummet in pre-tax profit is enough to put anyone on the back foot. Ever since profit plunged to just under £56,000 in 2008, Stanton Williams has been climbing uphill. Now the figure has only risen by about £10,000 between 2008-2010 but the directors are predicting further modest growth in 2012, although they won’t be drawn on a percentage. Rather than follow the crowd and look for work overseas to achieve growth, they intend to focus on the UK, in as many sectors as possible.
As architectural practices around them gear up for work in China, India, or wherever else the opportunities may be, Stanton Williams is staying put. “We made a decision a while ago not to focus too much on overseas work and the vast majority of our turnover comes from the UK,” says Williams. Are they not concerned about the future of the UK economy in 2012 and beyond? “We haven’t swayed, no. We do work in France, Switzerland and we had a job in Moscow. And a lot of our art work is overseas but generally we will stick to what we believe in, which is having a spectrum of experience over a number of sectors in the UK.”

These sectors include residential, retail, education, masterplanning, sport and leisure and transport. “We’ve never really been focused on one sector,” says Williams. “So in terms of beating the recession that’s really helped as we haven’t had to rely on one specific area.”

And their decision not to embrace technology at the expense of existing skills such as model making facilitates this: “Technology is changing fast, and clients have different demands,” says Stanton. “But we feel our broad approach means we don’t have to be a specialist in everything. We can bring specialists in, which allows us to bring our skills - creativity, design, space efficiency.

“BIM is an important tool and we have started using it but the computer is just a tool and we also like to be physical and make models. It’s good for communication as well as presentations and it’s an ethos that runs through the whole studio. We don’t feel technology needs to be at the expense of everything else.”

So is there anything else the firm wants to do differently? “The way we work is the exact opposite way to how most architects are trained,” says Stanton. “That’ll be a ‘yes’ then.”

“We’re very interiors-focused,” adds Williams. “And that has steered us in a different direction to our competitors. We look more at internal spaces than external facades. It bucks the trend compared with the more egocentric style of architecture that so many have adopted.”

“Obviously we’re working on bigger projects now,” adds Stanton quickly. “So we are concerned by outsides as well as insides.” He points out that these days clients are acutely concerned by how a building works efficiently on the inside: “Clients want flexibility more than ever. Budgets are tight and buildings must be as efficient as possible. We have to think through every space, put intelligence into the design and think ‘can I get double use out of this space?’ And that’s something we have experience in.”

Looking around the pleasantly cluttered offices for a second time, as staff work on computers, sketchpads, iPads and cardboard models, moving between well-lit
canal-side tables, a makeshift library of books, their desks and a craft bench, it’s clear that when it comes to making use of the space you’ve got, Stanton Williams has got it sussed. 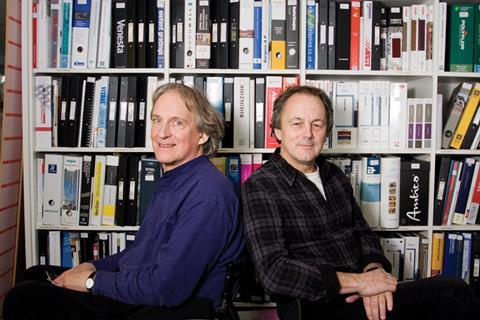