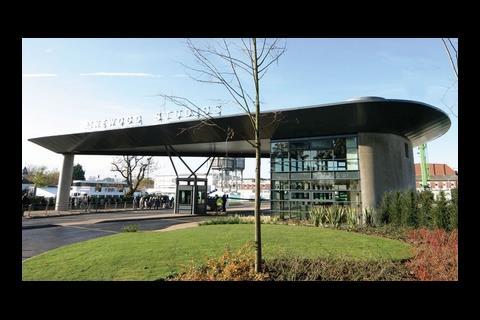 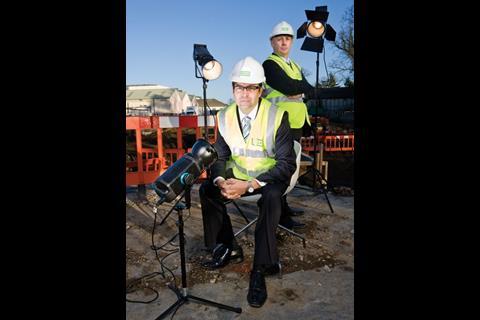 Okay, so this is the story: two guys called Adams and Wilde dream of setting up their own business. Only the firm called Benson they’re working for goes bust and our two heroes have to work under a new regime they can’t stand. So what do they do? They get the hell out, set up their own business and get all the good guys from Benson to work for it. So, Daniel Craig and Clive Owen for the lead roles?

As Ken Adams and Mike Wilde watch from the wings at Pinewood Studios as work starts on their most valuable project to date, the two former directors of bust fit-out contractor Benson are entitled to a moment’s reflection on their three-year rollercoaster ride.

“Ninety-nine per cent of the time you don’t give it a thought,” says Wilde. “But there are occasions, like when the site board goes up on something like this, that you think, hell, that’s us.”

Wilde’s pride is easy to understand. Lifebuild, the start-up contractor which he and Adams established from scratch in 2005, has just won a £6m deal from Pinewood and Technicolor, silver screen pioneers and the makers of the Bond movies. The firm will build film laboratories at the studios where Connery & Co made their name. The deal is the largest in Lifebuild’s short history and its first true glamour project.

It’s a far cry from the bleak, uncertain future facing the pair this time three years ago. In mid December 2004, Adams and Wilde – then young, dynamic directors of Benson’s Northern Home Counties division – found out that the profitable, £25m turnover regional business they’d built from nothing was about to be lost. Loss-making contracts and poor management in Benson’s Midlands division had, unknown to managers elsewhere, been dragging the entire business down for months. Now the secret was out and Benson was about to be plunged into administration.

It was the ambition to run his own business that pushed Adams to join Benson in 2001. Both he and Wilde had worked for Bickerton in St Albans in the years before its troubled sale to Artisan. The Bickerton board had decided to float the company, and Adams, a shareholding director, was concerned about the constraints a PLC would bring. He started looking for a way out.

Then a call came from Alistair Sloan, managing director of Benson. He convinced Adams to join. The clincher? Adams was to run his own division in the Northern Home Counties (NHC) as a start-up.

One of the first people he called was Mike Wilde, already working in the area as a regional MD for Bickerton. Wilde jumped at the chance to join the charismatic Adams as construction director, and so began a wave of Bickerton ship-jumping.

“We started off with no jobs and no staff,” says Adams. “But we were very lucky in that we had good people at Bickerton who were very unhappy. We didn’t need to use any recruitment agencies.”

Benson, a £170m turnover business, offered IT and payroll support to the region, but left them to do everything else themselves. Despite this, in four years Adams and Wilde took the business from nothing to a £25m order book, earning it a reputation as the most successful part of the overall company.

“Those were four of the best years of my career,” says Wilde. “We were always on time and on budget, and clients always came back to us. It was the first time I had started something like that.”

But the good times ended abruptly.

The fact that something was very wrong with Benson became apparent in August 2004. Adams and Wilde had to learn about it from the press: the Midlands business, struggling under loss-making contracts and a poor local reputation, had gone into receivership.

A further shock waited. Initially their division continued normally despite the travails in the Midlands. But as time went on and Midlands’ suppliers were left unpaid, attitudes towards the company as a whole began to change. “Clients began to lose confidence,” says Wilde. Adams puts it more bluntly: “The receivership was badly handled,” he says. “Subcontractors didn’t understand why they weren’t being paid when the parent company was still afloat.”

Then came the bombshell. Sloan departed suddenly amid rumours of a boardroom bust-up. “That was a shock to everyone,” says Adams. “He was a charismatic character. We’d had a good relationship.”

Within days the board decided to put the business into receivership. “It was just before Christmas,” says Adams. “It was our livelihoods now we were concerned for.”

Adams and Wilde decided to try and buy the NHC division. “I was frustrated,” says Adams. “I had built a great business and through no fault of ours other parts of the business were mismanaged.” He pauses. “But it was a case of the king is dead, long live the king.”

At Lifebuild we really did have nothing. I literally got on the phone and said to people, ‘give us a job’

They made calls to try to get financial backing but, having been kept in the dark until the last minute, they were too late. Bluestone, a subsidiary of Morgan Sindall, had made an offer for the Southampton, NHC and New Reigate divisions.

“We ended up there [at Morgan Sindall] on the Friday night,” Adams recalls. “Morgan Sindall said they could secure jobs, and from then we were just seeing how we could work with them. Morgan Sindall wanted the three best parts of Benson together or no deal. Personally as well, I thought Bluestone could offer a lot, and my visions of buying a business were put to one side.”

Six weeks later Adams changed his mind dramatically. “It was a totally different style of management,” he says. “There was no freedom, no entrepreneurial spirit. And on top of that, no one knew who was running who.”

Adams acknowledges that things looked different from Morgan Sindall’s perspective. “There were subcontractor issues to deal with, and they just saw that Benson had failed,” he says. But his mind was made up: he was going to throw everything at setting up his own company. “It seemed so prescriptive at Morgan Sindall that for each of us, it confirmed that it was now or never.”

Adams left and Wilde followed him weeks later. They set up their new company Lifebuild in Adams’ living room in Birkenhead on 22 February 2005.

Says Adams: “Mike and I had spoken a lot before about what it would be like running our own business, and so when it happened, it was almost overnight. Mike came over to my house and we just started.”

From day one, Adams started pushing old NHC contacts for business. “We really did have nothing. I literally got on the phone and said to people, ‘give us a job’.”

Lifebuild’s first contract, with Adams as surveyor and Wilde as contract manager, was a £150,000 office fit-out in the West End, won through a recommendation from architect Graham Seabrook. Seabrook persuaded the client to pay Lifebuild every two weeks, providing the pair, who had each taken a second mortgage, with badly needed cash.

Adams and Wilde had two other guardian angels. Ken Wilkins, the founder of Hatfield Construction who bought Bickerton when it was losing money, came out of retirement to offer financial backing to Lifebuild along with his long-term business partner, entrepreneur Bob Morton. Wilkins became a non-executive director, bringing his expertise to the firm. Their sheer physical presence also came in handy: “They added depth as well,” says Wilde wryly. “It looked a lot better than just us going to a meeting.”

For the first year, Wilde and Adams focused on creating a business plan, and drawing up a list of former colleagues – now disillusioned with Bluestone – they would attempt to bring on board. Problems with a £1.5m contract on Northfield High School, which was held up because of a delay with lottery funding, meant the business remained in the living room.

But in the meantime, Lifebuild had tendered and won other smaller jobs, including construction of a £750,000 house. The job needed to complete on 23 December for the client to move in and on 23 December Adams and Wilde were sat in the kitchen cheekily supping champagne. “It was a big moment for us,” says Wilde, “as we knew we could deliver.”

Now ensconced in permanent offices in High Wycombe and with a secured forward order book of £10m to compare with last year’s £3.5m, Adams and Wilde’s reincarnation is almost complete. Lifebuild now employs 17 staff, all but one of them ex-Benson NHC. They are on target to create their goal, a regional business of about a £20m turnover.

“We could be in a stronger position this year than our business plan envisaged thanks to the Pinewood contract,” says Adams.

Current market conditions are not ideal for small businesses, but Lifebuild looks relatively well placed to weather the storm. Its market spread is fairly even, without huge exposure to either commercial or private housing but with a strong presence in education and social housing, sectors still receiving government spending.

Adams boasts that getting to £20m won’t be the hard part: keeping it there will be. After Benson they are determined to keep a lid on the company’s growth. “£20m means we’re in control,” says Adams firmly. “There’s no point in having a business if you don’t manage it properly.”

“Not growing too quickly, maintaining control,” adds Wilde. “That’s the Benson lesson.” And after the strain of the past three years, it’s easy to see why they wouldn’t want a sequel.