The big push: getting materials to the 2012 Olympic site 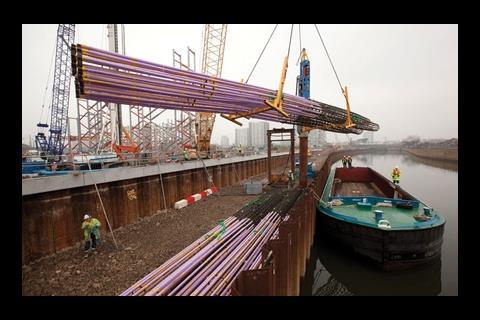 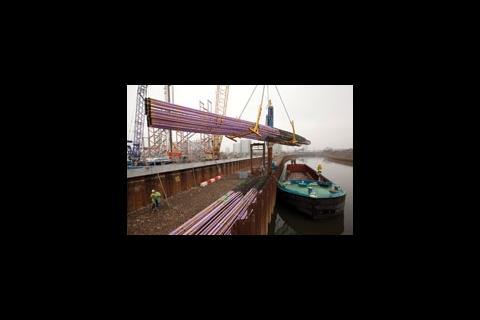 The Olympic team is using every means possible to get the vast amounts of materials it needs into its hemmed-in east London site: roads, railways, and now the River Thames. Thomas Lane reports on a grand offensive

‘Of all the elements in this project, logistics is the most important,” says Howard Shiplee, director of construction for the Olympic Delivery Authority. “As General Omar Bradley said: ‘Amateurs study strategy but professionals study logistics.’”

As one of the brains behind the D-day landings, Bradley knew a thing or two about organising large set-piece events. But even he might have paused for thought at the prospect of building seven venues worth £9.3bn on 2.5km2 of formerly derelict land inside the next two years. This, as Shiplee is well aware, is a logistical operation that needs to be very professional indeed. Fortunately the Olympic Delivery Authority (ODA) has come up with a grand plan that might just be equal to the big show …

Trains and boats and trucks

The numbers involved on the Olympic job are predictably formidable. Millions of tonnes of materials must be delivered, and up to 9,000 workers need to get on and off the site every day. Even for such a large site, this has proved surprisingly difficult. Access is blocked by a waterway and dual carriageway on the western side, and a railway line limits access to the south.

The main route in for materials is at the northern end from the A12, which connects to the M11 and M25. According to Ray Payne, head of construction strategy and logistics for the ODA, this road simply cannot cope with the volume of traffic. “If we exceeded the capacity of the slip road, we could block the whole of the A12,” he says. “The success of the logistics plan depends on reducing the likelihood of a traffic jam on the A12.”

Given the limited capacity of the main artery, what could be done to get goods to the site on time? Ironically, the very barriers impeding the job have turned out to be its saviour. The ODA has spent millions of pounds improving rail and water links so goods can be brought onto site by train and barge, as well as by truck. Not only does this ensure the timely delivery of all those materials, it also boosts the Games’ sustainability credentials. “The reason for being so enthusiastic about rail and water is to reduce the risk of a bottleneck on the A12 and to cut carbon emissions,” says Payne.

The ODA has set itself a target of using water and rail to shift half of all materials by weight. And by next week, when the first barges arrive on site, all three transport methods will be up and running. This will probably make London 2012 the only project in the country to use road, water and rail to move goods onto site.

Contractors can choose which method they use, so the three options have to be cost competitive. Despite the relative cheapness of rail over road, Payne says it has been a struggle to wean contractors off the habit. “With some firms, it’s been pushing at an open door,” he says. “For others, it’s been more difficult. If you’ve run your business based on road transport for the past 30 years it becomes the default way of thinking. Slowly but surely we have worn that away.”

The answer to this, says the ODA, is that it depends on what is being moved. “We’re trying to have a balanced portfolio, so what is better going by rail goes by rail, and what is better by road goes by road,” says Shiplee. “For example, there is no doubt the most efficient way to move large quantities of bulk materials is on the railway.”

The ODA is already beating its 50% target – currently it is moving 57% of materials by rail or water. But rail is no good at moving large, prefabricated structural items and these have been brought in by road.

Shiplee recognises that staying on target will get more difficult. “As we move forward and away from bulk materials it will be more challenging,” he says. “By the time you have collected together lots of small items from different places and put these on the train, it’s no longer economic. We recognise that and will always try to encourage our contractors to use the most sustainable transport method.”

So how has the ODA got these three routes working and how do they function in practice?

Two logistics centres have been created, one by the M11 at Chigwell, which opened on the 1 June, the other in Barking, was already operational. This has the benefit of an existing railhead and storage facilities.

Road travel is familiar to contractors. It is also highly flexible as lorries are small but can go anywhere, so are suited to the delivery of a variety of small items.

What’s on the truck?

Almost everything, bar large quantities of bulk items. At the moment, 400 vehicles go into the park each day, but there will be 1,250 when construction is at its peak next year. That’s one vehicle arriving and leaving every 12 seconds.

If a contractor needs anything, it places the order using an electronic delivery management system. Logistics specialist DHL, which is running the logistics centres, can see what is been ordered, the name of the driver and the registration number of the vehicle. When the vehicle arrives at the centre, these are checked off and the driver issued with an Olympic park passport. The vehicle can be subjected to a random security check before being placed in a holding area ready for travel to the Olympic park.

If a vehicle takes longer to get to site than expected, it will be searched again on entry. In future, goods could come by rail to Barking and be taken by road to the site. DHL also plans to offer a consolidation service to contractors, whereby it delivers all the material needed for a day’s work in one go.

The rail facility was the first form of transport on the London 2012 site to be fully operational. There is a railhead at Bow East, to the south of the site, and also at the Barking road logistics centre. Work started at Bow East in February 2007. The 28-acre site needed hardstanding and drainage and the railway track needed realigning so it could handle longer trains. Equipment for unloading the trains was also needed.

Bulk goods, containers and goods on pallets can all be easily transported by rail. It’s quick and, compared with congested roads, reliable. Each train can hold up to 1,350 tonnes of materials, equivalent to 75 lorry loads.

Rail transport produces less carbon emissions than road and involves less double handling than many people assume. Because fewer people are involved than with road transport, less security checking is required, too.

It’s also flexible: an order placed with DB Schenker, the company that operates the Bow East railhead, on a Friday will be delivered on the Monday.

Rail is solely responsible for the Olympic Delivery Authority (ODA) exceeding its sustainability target of 50% of all goods to be delivered by rail or water. The ODA estimates that 4 million tonnes of goods will be moved by rail, saving 120,000 tonnes of carbon dioxide during the construction phase.

The strength of rail to move large amounts of the same item over long routes is balanced by its poor performance in shifting many different items over short distances. As the project moves towards completion, lots of disparate items will be needed, which means rail will struggle to maintain its edge. It is also incapable of moving wide or high loads, such as prefabricated roof sections.

What’s on the train?

Most of the aggregates and sand needed on the Olympic park. Concrete blocks and drainage materials. Contaminated soil is remediated on site but two trains a week take away material that is beyond remediation.

The first train arrives at Bow East at 6am. Trains are given slots outside peak commuting hours. “People think the network is full up but it isn’t at 11 at night or at lunchtime,” says David Legge, DB Schenker’s general manager for the Olympics. At 7am, the workers arrive and unload the train in 90 minutes. At 9.40am the rush hour is over and the train leaves; the next one arrives at 10am, followed by another at 12.30pm. The railhead can handle six trains a day. Aggregates are piled up ready for taking to the batching plant next to the railhead. DB Schenker also distribute goods around the site; the maximum distance travelled by truck is 2km.

All the waterways in the Olympic park link to the tidal River Thames so the water level fluctuates by up to 5m. When the tide is out, a barge would be left aground, and when the tide is fully in the barges would not be able to get under the bridges.

But this isn’t the main reason for spending £25-30m on improving the waterways. “Managing the water level is tremendously important for the appearance of the park,” says Mark Stephens, the Olympic manager for British Waterways. “Imagine aerial shots of the park in 2012 with the tide out and it’s all mud slicks and shopping trolleys.”

Thirty-thousand tonnes of material, including numerous trolleys and two cars, have been dredged from the waterways. A lock has just been completed to the south of the site that can accommodate two 350-tonne barges and also includes weir gates that can be raised and lowered to control the water level if the river floods. Signage and bridge protection has had to be added and an area of hardstanding built near the aquatics centre to unload the barges.

Water transport matches the existing infrastructure as there is an aggregates depot across the river near the O2 arena. Imported goods are brought in by boat to Tilbury further downstream and are easy to transfer to barges. There are also waste depots at Rainham, 10 miles downstream.

Although barges are more suited to carrying large items than trains, they are also slow and are useful only for moving goods short distances.

What’s on the barge?

Not much at the moment. The lock has only just been completed although there have been some test boats carrying rebar. Shiplee thinks the main use for barges will be shipping construction waste out of the site rather than bringing goods in. Contractors can ask for goods to be delivered by barge by ringing up logistics specialist DHL.

Leisurely. Getting materials onto the barge is straightforward, then it is a short trip upstream into the River Lea, which leads up to the park. The lock can handle eight to 16 barges a day, depending on the tide, but is expected to handle fewer in practice. From the lock it is a short distance up to the wharf area where the boat is unloaded.