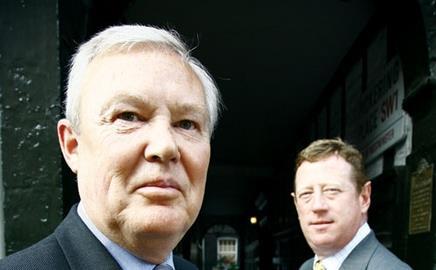 When Mike Davies took over from James Wates as chair of the Strategic Forum earlier this week, the organisation got a quieter, more reserved leader. Mark Leftly spoke to both men to find out if this will also mean a change of direction

The old and new, James Wates and Mike Davies, make for a striking contrast. Wates’ deep voice booms and exudes authority, while Davies’ is quieter and more reserved. With a larger physical presence, Wates dominates the interview.

Davies took over from Wates this week as chair of the Strategic Forum, the body set up in 2001 to lead debates about the biggest issues in construction. Building asked to meet up with the pair to reflect upon Wates’ year in charge and find out what Davies is preparing to do with his 12-month stint.

When Wates, a member of the eponymous construction dynasty, took over from Peter Rogers, the former operations director at Stanhope, last year, he told Building he aimed to limit the organisation’s remit to just three or four core issues. He feared it was losing clout by spreading itself too thinly.

“I don’t think it was anyone’s fault,” Wates explains, obviously worried his decision implied criticism of Rogers. “Peter did terrific work identifying the issues, but we can’t address all of them at once. Peter didn’t want to let anybody down, so the agenda was getting pretty congested.”

One of the areas Wates focused on was health and safety, and this is where he feels he achieved most success. He believes that “if you can measure it, you can manage it”. He assesses his success in health and safety by the take-up of CSCS cards, which he argued vociferously for in articles and speeches throughout the year. He says this is why 87% of the workforce now have the cards and that, otherwise, it would have been closer to 75%.

His second area of focus was sustainability. The Strategic Forum published its agenda for the issue late last year, focusing on reducing carbon emissions and the amount of waste going to landfill. As ever, Wates says this includes measurable targets. “Sustainability means all things to all people. It struck me you could end up trying to solve world hunger,” he says.

Wates admits he did less well when it came to integrated teams and supply chains. He had hoped to get 50% of public projects on board, but he is only clear that it is now above 20%. Like many government failings, Wates blames the creaky mechanics of the civil service: “There are struggles in getting government departments to recognise integrated payment.” However, he adds that the Highways Agency, Defence Estates and the National Offenders Management Service have been supportive. “But these are silos.”

Davies has been relatively quiet until now. He was formerly chair and chief executive of Baxi, the heating group, and was once vice president of the Construction Products Association (CPA), which is how he became chair of the Strategic Forum. The role rotates every year between the three core member bodies – the CPA, the Construction Industry Council and the Construction Confederation.

Obviously impressed by Wates’ work, Davies says that he will stress “continuity”. However, he is concerned about the dour image of the forum and the industry at large. “There are lots of initiatives around,” says Davies, “which tend to generate a language of their own. We need to build a consensus about the way we talk about things – a bit of brand-building. I don’t think there was a branding exercise for the Strategic Forum in the first place.”

However, Davies faces a real challenge this year. Sir John Egan, the first chair of the Strategic Forum, set a number of targets through his Accelerating Change report in 2002. These included cutting construction costs and times by 10% per year.

However, most of these run out this year, so it is time for a new set of priorities. A report should be ready by the first half of next year, explains Davies, “moving reasonable goalposts further forward”. Apart from this bit of jargon, he gives little away as to what the priorities will be. However, he concedes that there must be some tough aims on sustainability. “It must be higher up the agenda than five years ago,” says Davies.

He thinks the five-year targets should be retained: “If it’s strategic, it has to be that kind of timescale.”

The two men don’t know each other well, and this shows at times, but on one issue they develop more of a conversation: criticism that there are too many industry bodies, even though the Strategic Forum attempts to tie most of them together.

“This is a big industry, so proliferation is inevitable,” argues Davies. “If you have an issue that is very specific you’ve got to have something that focuses on it.

“The Strategic Forum is where there is a holistic view and big targets can be directed. Within that there are a lot of separate organisations focusing on pieces of the jigsaw.”

Wates’ face lights up: “The jigsaw analogy is a good one. The industry is putting the jigsaw together blind. The Strategic Forum gives an idea of the picture.”

The two nod together, suggesting that, although there is now a strikingly different personality at the head of the forum, the approach won’t be unfamilar.

What is your favourite film?
JW: You can’t beat a good Bond movie. The latest one, Casino Royale, is the best yet.
MD: I’m going to agree with him, just to show we’re bonded.

Where do you go on holiday?
MD: I have a home in Spain.
JW: Anywhere where there is sun and sea.