What Trump's victory means for construction

Back in October we asked industry experts what a Trump victory would mean for UK construction firms, here’s what they said … 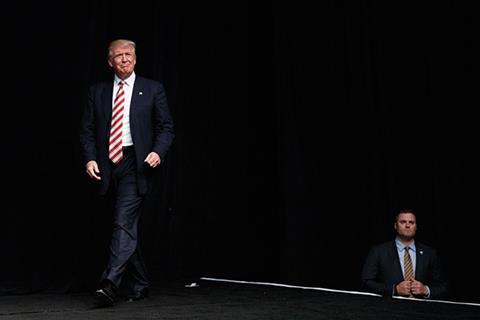 This morning the world has woken up to the news that Donald Trump has won the US election to become the 45th president of the United States of America. Just a month ago we considered the impact such a result - at the time an outside bet - would have on UK construction firms.

Our magazine cover on 7 October asked ‘How scared should you be?’, and the predicitions from industry experts in the feature-length article now take on a new importance. And for added colour we re-ran parts of our exclusive interview with Trump in 2008, when he was a mere property mogul, about his views of the UK. 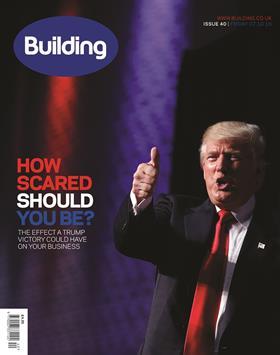 What if Trump does win?

Over the last few months, the Brexit referendum and its consequences have hogged the headlines here in the UK – but another vote looks set to dominate the airwaves this autumn.

In just over a month’s time, if the tightening of recent polls continues, the world’s only remaining superpower could be in the hands of one Donald John Trump, a man with no track record of elected office and, judging by his Twitter account, a very thin skin. To say that opinion is divided over the Republican Party’s candidate for the US presidential election is a gross understatement. Much of the American voting public adore him. Woolly liberals can’t stand him. But perhaps most significantly, the US business establishment doesn’t seem at all keen, either.

But as she observes, ruefully recalling the outcome of the EU referendum, “just because the business community thinks something is insane doesn’t mean it’s not going to happen”.

Of course, Trump’s fame and fortune are rooted in the business world. The colourful billionaire comes from a real estate background in New York, where he worked for his father’s company, specialising in residential projects. He soon took over the company, renamed it the Trump Organization and expanded into high end hotels and casinos. The 70-year-old now has an estimated fortune of $4.5bn, according to the Forbes 400 rich list, and his building projects are on a grand scale, including the $290m Trump World Tower in Manhattan (see project highlights).

Back in 2008, when Trump was just a tycoon and not a presidential hopeful, Building interviewed him about his plans to expand in Britain. At the time he was full of praise for the construction industry over here and indicated that he wanted to work with UK firms, saying:

“I, for one, like working with UK firms and architects” (read more quotes from our Trump interview below). Cut to 2016, and UK firms with interests in the US may not just be contemplating doing business with Trump on construction projects, they are facing the prospect of being indirectly affected by him and a drastically changed political climate if he wins the 8 November vote.

So just how exposed are UK firms to any global economic consequences of a Trump presidency? And for those companies and individuals that do operate in the States, should they be worried that his protectionist stance could mean tighter entry requirements to the US market?

Unlike in the 1980s – when, to paraphrase the iconic advert for the Hanson conglomerate, a lot of firms from over here were doing rather well over there – the UK construction sector’s exposure to the US market is limited these days. Out of the major listed contractors, according to Tony Williams of consultancy Building Value, only Balfour Beatty retains a significant exposure to the US market, while no UK housebuilders operate across the Atlantic following Taylor Wimpey’s late noughties withdrawal.

Just because the business community thinks something is insane, doesn’t mean it’s not going to happen

Accessing the US job market is hard for overseas professionals, says Bentley: “There are already quite significant trade barriers with the US. They protect their markets far more than we do: it’s very difficult for us to transfer staff to the States.”

But a few significant names do remain. “In terms of boots on the ground, a handful of building product companies and white collar consultants have reasonably big offices in the US and continue to do well,” says Williams. Consultants with a presence in the US include Gleeds, WSP Parsons Brinckerhoff and Atkins, while other big names in the UK such as Aecom and Halcrow are US-owned.

And the US remains an important market for high-profile architecture practices such as Foster + Partners, which is at this moment finishing off tech firm Apple’s headquarters in California.

Ben Derbyshire, president-elect at the RIBA and managing partner at architecture practice HTA, agrees, saying that it is in nobody’s interest for the next US president to clamp down on freedom of movement for professionals working in the built environment.

He says: “What we need is the equivalent in the built environment professionals of the kind of passporting that enables freedom of movement in the financial services.”

Urbanisation, Derbyshire elaborates, throws up challenges that are best tackled by pooling expertise from across disciplines and geographies. “You need the very best talent available: an isolationist approach is not what we want,” he says.

Maintaining healthy trading links is vital too.  While Far Eastern investment in UK property may have made headlines in recent years, the US remains by far the biggest foreign investor, accounting for 27% of all inward investment last year, according to UK government figures.

But probably the main issue for the industry is the impact that the US election will have on the broader business climate.

Waller says: “Whoever is the next president of the United States, UK construction will hope that they bring stability and positive growth to the world’s economy; which will inevitably have a positive impact on the UK’s domestic economic performance and construction demand. Jack Pringle, principal at architect Perkins+Will, agrees. “The world economy largely still hinges off a strong and open US economy. I hope that the next president whoever she or he may be will deliver this,” he says.

Bentley also expresses concern about world stability – that a bellicose Trump, who has threatened to hit the jihadist group Islamic State hard, will increase the risk of conflict in the Middle East and beyond and hence increase instability, which will in turn dampen business confidence.

But of course here in the UK, it’s all out of our hands. Williams says that, if Trump does win November’s poll, the UK government must simply swallow its distaste for the Republican candidate – especially in a post-Brexit vote climate where transatlantic trade links will become even more important than they are now.

“The UK desperately needs the US. Both as a friend and an export market, it’s always been important but now that the UK is exiting the EU, it’s doubly important. They shouldn’t write it off because he might win. At the diplomatic level it’s enormously important for the UK to have a very strong economic relationship with the US.”

Building interviewed Donald Trump in 2008. Here were his views on the UK, the US, success and ambition:

“It used to be that if you were good in construction or property in the US you’d be good in the UK but I think that’s true vice-versa these days. I, for one, like working with UK firms and architects.”

And he gave our reporter Emily Wright some salutary advice: