When you’ve got houses and flats on a tiny plot, no room to store fuel and little roof space, finding a zero-carbon heating solution is tricky. One team went underground to find the answer 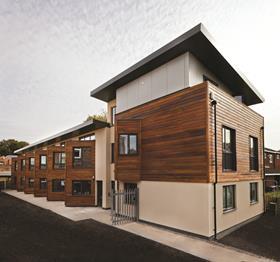 How do you create a zero-carbon home when your site is so tightly constrained none of the usual low- and zero-carbon heating technologies will work? This was the challenge facing Shine ZC, a consortium including Aggregate Industries, Loughborough University and East Midlands Renewable Energy. Six homes and three apartments have been shoe-horned into a tiny plot in Derby where every inch of space had to count.

The aspiration was to provide all the heat needed for the homes using on-site sources but there wasn’t enough roof space for all the PV panels needed to supply heating loads. Solar thermal panels will not provide enough heat in winter and ground- or air-source heat pumps and biomass were no good either. “Ground source heat pumps might freeze the ground in a compact setting and when it is very cold, air source heat pumps go into a defrost cycle that could use as much power as using electric heaters,” says Vincent Smedley, technical director of East Midlands Renewable Energy (EMRE). “Biomass could be problematic in a tight setting and there wasn’t enough space to store the fuel.” 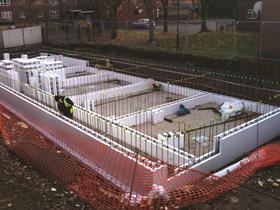 The team has come up with an innovative solution. Each home has a thermal heat store under the ground floor. This is filled with aggregate, which is heated over the summer using roof mounted solar thermal panels. The stored heat is released into the home as needed during the cold winter months.

The system has been designed to minimise installation costs so the heat store occupies the space between the foundations of each home. First, the ground between the footings is excavated and the first stage of the insulated concrete formwork walls used for the structure of the home is installed. A 165mm thick sheet of PIR insulation is used for the base of the heat store, which gives a U-value of 0.143Wm2/K. One home has been built without floor insulation to see if this allows the ground to heat up and store more heat. In order to stop it escaping into the home during the summer months, 400mm of expanded polystyrene insulation is used as a lid and the same is added to the sides of the heat store to give a U-value of 0.78Wm2/K.

Each heat store measures 6m by 4m, is 1m deep and is filled with aggregate from recycled concrete and brick from the former building on the site. According to Smedley the key thing is to ensure good heat transfer characteristics between the warm air circulated through the store and the aggregate. “The material is graded to maximise its heat storage capacity without making it too difficult to push air through it,” he explains. The aggregate is 45mm to 55mm across and is irregularly shaped to increase the surface area; the ratio of aggregate to void space in each cell is half and half.

Warm air enters a baffle that forces it to the bottom of each cell. These are divided along their length with a sheet of insulation, which includes a hole at the far end from where the air enters. This sits at the base of the heat store, again to promote heating of the aggregate from the base upwards.

The heat is provided by a 100m2 flat-plate solar collector mounted on the roof of the development. This heats a liquid, which is circulated through a heat exchanger similar to a car radiator. Air is then blown through the heat exchanger and is circulated through the thermal heat stores. A microCHP system is also used to heat the air; Smedley says this will act as a backup in case the concept doesn’t work and it will also provide heating during the first winter, as the development completed at the end of summer. A full summer of solar panel heating has been calculated to heat the aggregate up to 70ºC. 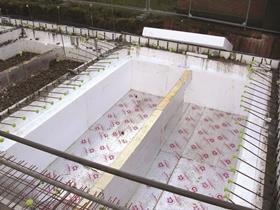 In the winter, air is warmed by circulating it through the heat stores. The heat is concentrated by running warm air through an air-source heat pump that supplies hot water to a conventional heating and hot water system. “Perhaps it’s a slightly over-engineered solution but we wanted to keep the house as conventional as possible so we went for a wet system,” explains Smedley. “It also gives us more flexibility in maintaining a preset temperature.” The heat pump uses electricity but Smedley says the high input temperature means it will have a good co-efficient of performance - five units of heat energy for every unit of energy supplied to the heat pump, averaged over the heating system. He adds that future schemes could feature warm air heating to cut out the electrical demand of the heat pump.

The scheme has just completed so it is too early to say how well it works. The homes have been built to Passivhaus standards of insulation and airtightness so have a low heat demand of 2,000kWh a year for all nine dwellings. Smedley says the system has been sized to provide a belt-and-braces output of 4,000kWh a year so future installations could be much smaller. As this scheme is a prototype it has cost £250,000 but Smedley thinks that costs could come down to a 10-20% premium over a house built to 2010 Part L standards for the heat store, heating system and well insulated envelope. EMRE plans to market the system with Aggregate Industries, so with the drive towards zero carbon the system could be coming soon to a site near you.

This features was originally titled Things are heating up