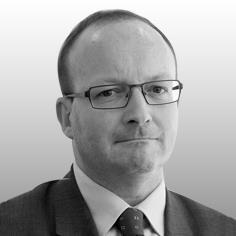 For the past half dozen Christmases, brickmakers (those still in jobs) would be firing up the brandy sauce rather than their kilns, but this year they may have to miss the Yuletide Strictly Come Dancing special. After five years of belt-tightening, manufacturers are having to catch up and that means working over the winter, including for some the festive period, for the first time since the financial crash.

Brick production in this country retrenched even faster than housing starts, leading to brick stocks falling by more than two-thirds (see chart 1, below). While deliveries in 2013 are likely to be down 8% on 2008, production has been cut by 24%. Plants were closed or mothballed, workforces were slashed and long winter shutdowns became the norm.

Housing Minister Kris Hopkins ironically boasted yesterday that UK manufacturers will have this year made enough bricks to stretch nine times around Earth, according to a jolly little press release from the DCLG.

A supply-demand imbalance is developing among brick layers who, no doubt, recall, like the manufacturers, being screwed down by their customers for the past several years

Sorry Kris, but that just ain’t enough. Now the industry is carrying stocks equivalent to just 11 weeks of deliveries, against 32 in 2008. With the housebuilders gearing up to boost their output significantly (but not anything like government is hoping for) and commercial work recovering in some sectors, this figure could shrink even more in the months ahead.

Hence the almost entirely foreign owned industry’s decision to crank up production. Ibstock, owned by Ireland’s CRH, the UK’s number one, plans to keep all 20 of its plants open during winter for the first time since 2007, according to the FT. Staff of Hanson (offshoot of German Heidelberg) and Austria’s Wienerberger could similarly be manning the kilns rather than tucking into the Stollen and Gluewhein. 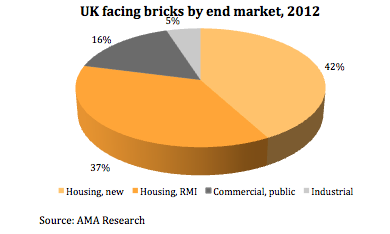 That’s not to say they’re going to be giving the stuff away. While Britain’s housebuilders are pretty big at the top, the brick industry is dominated by an oli-, sorry, trio of global behemoths. No guesses for who has the greater pricing power; even if production goes up, prices are likely to continue a similar upwards trajectory, referred to recently by most of the builders. A similar supply-demand imbalance is developing among brick layers who, no doubt, recall, like the manufacturers, being screwed down by their customers for the past several years. 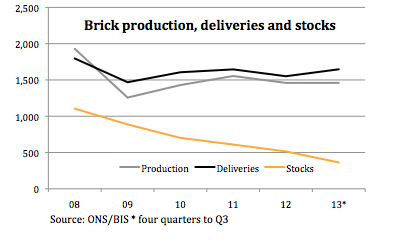 To make things worse, bricks have become trendy outside the new housing sphere (which accounts for 42% of end-users, see chart 2, above), according to architectural pundits. In October the FT’s architectural critic Edwin Heathcote waxed: “For decades, brick has seemed to be confined to the endless exurban landscapes of the mass housebuilders, the much derided Noddy boxes [etc etc]. In the centre of the city it was replaced by glass, steel and spuriously colourful panels, an architecture as paper-thin in appearance and as lacking in texture as it was in ideas. But now, I hope it is safe to say, brick is back.”

If, indeed, brick is back, Kris Hopkins will have to cut the ribbon on quite a few new kilns in the months ahead.