ISG’s new boss on different thinking, growth aspirations - and more of the same

Former bricklayer Matt Blowers took over from Paul Cossell at the top of the firm this month. He tells Dave Rogers how he plans to build on his predecessor’s work 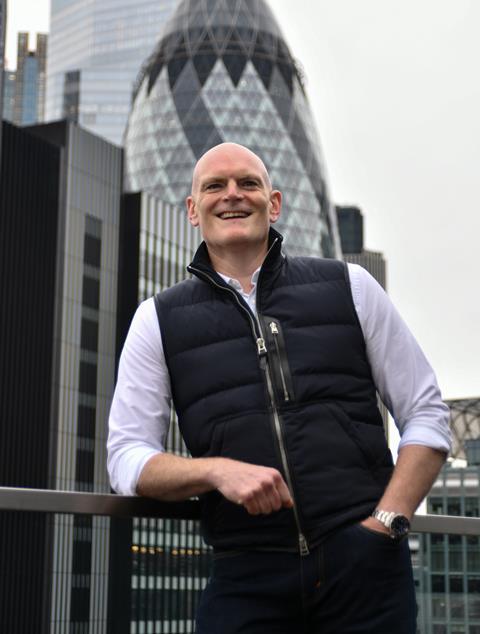 ISG’s new chief executive is a failed bricklayer. He says so himself.

Born in Cleethorpes, a seaside town on the Humber estuary just east of its better-known neighbour Grimsby, Matt Blowers started out at Shepherd Construction in the place where he grew up and which he still calls home – Grantham.

The Lincolnshire town’s most famous export, Margaret Thatcher, was celebrating a decade as prime minister when Blowers began his career as a wannabe brickie in 1989. But it didn’t last long.

“It wasn’t really for me,” Blowers says, half-joking that at over six feet tall it involved too much bending down. “[Bricklaying] was a really difficult trade, so I went into a site manager role.” He spent nearly a decade of his own at Shepherd before joining ISG in 1998 as an assistant construction manager.

Last year, ISG announced a changing of the guard, with Blowers becoming chief executive from the beginning of this year while Paul Cossell, who had been in the role ever since the firm delisted from the stock exchange six years ago after a takeover battle was finally won by the firm’s current US owner Cathexis, moving sideways to become an executive vice-chair.

“I will be out of the kitchen and he [Blowers] will be head chef,” is how Cossell, who turns 57 this May, puts it.

A private equity firm, based in Houston, Texas, Cathexis had been a long-term investor in ISG and Cossell took over from David Lawther weeks after the Americans bought the company for £85m.

Cossell, who has been at ISG since 1996 and was this week formally appointed chair of industry group Build UK after the departure last November of former Osborne boss Andy Steele, says of Harrison: “He has been very supportive. He has got long-term thinking, a forever owner. He has a passion for the built environment and has given us nothing but total backing.”

Cossell adds that being out of the kitchen does not mean that he is out of ISG. “My intention is to support ISG’s growth and that is very ambitious,” he says.

“There are certain sectors we want to grow into and anything I can do that accelerates and assists that is my primary focus.”

He won’t say what exactly but concedes that areas where the firm is looking to expand include moving into modern methods of construction. Acquisitions, he says, are part of that process, which would be a first since the Cathexis takeover.

“We have been disciplined and focused on creating solid foundations for the business. We are now a very strong and skilled business and we are looking at the next phase.”

Blowers, who was promoted to the board more than two years ago and was the chief operating officer of its fit-out business, says he and Cossell were speaking for the best part of a year about becoming chief executive before the news he was taking over was announced last October. 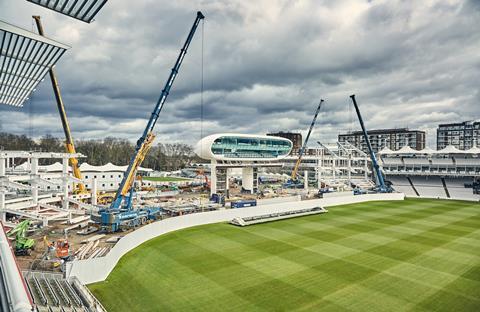 Construction of the new Compton and Edrich stands underway at Lords cricket ground, one of ISG’s most high-profile jobs of last year

“I’ve never been afraid to say that I’ve been here a long time and would relish the opportunity to do [the top job].”

Under the rejig, ISG’s head of construction Zoe Price had her brief expanded to become chief operating officer for ISG’s entire UK operations. And Dutchman Bart Korink, previously in charge of its engineering services business – which includes its health and data centre work – has become COO for its international arm. 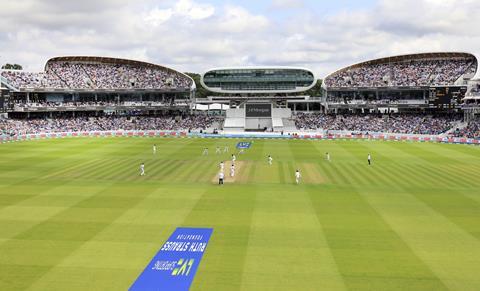 The 48-year-old Blowers is not promising radical change but there are certain things he wants to do more of. “I want to dial up our ESG credentials, modern methods of construction, technology in construction, our diversity agenda. It’s important to our people.”

Last autumn, Blowers went on a whistle-stop tour to visit ISG’s 2,000 UK staff, allowing him to touch on how much the industry has changed since he started out. “I joined when I was 16. I was a really bad bricklayer. I went into trainee management and back then it was either become a site manager or a QS. These days, we’ve got all sorts of talent coming in for all sorts of jobs: social value, BIM, digital.

“Construction isn’t just about being on site and making it happen. It’s a really big part, of course, but there’s lots of other things now such as the carbon agenda. We’ve got to start thinking differently and how we fill these roles from different sectors with diverse people.”

“We have growth aspirations like any other business,” Blowers says. “If we get to £3bn [turnover], great, but it’s not an aspirational target. We’re not driven by volume.”

Its core markets will continue to remain the same, such as data centres and fit-out. It has also built more and more sheds – a description of the hi-tech logistics centres that makes Blowers wince. “They are quite technical spaces, depending on the end-user,” he offers.

The office has to be a destination now. You’re never going to get people coming back into an office to send emails all day

Fit-out work has boomed in the past 12 months, he adds, with businesses willing to spend large sums of money on upgrading offices. Turnover in London alone, where it won a £100m-plus deal to overhaul Barclays’ Canary Wharf HQ last September, was around the £600m mark last year.

“The office has to be a destination now. You’re never going to get people coming back into an office to send emails all day. People need to come into an office for a reason other than doing day-to-day tasks, and that is predominantly for collaboration or to use technology they haven’t got at home. 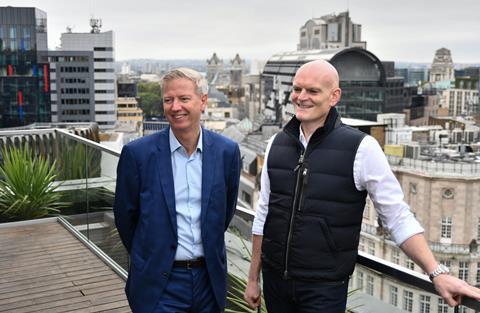 Blowers with former chief executive Paul Cossell, who is now ISG’s executive vice-chair having led the firm for the past six years

“An office is a shop window into a business’s culture,” he adds. “There is a massive war on talent not just in our sector but across the piece. People are investing significant money on getting their facilities in a great place to retain talent and attract the best.”

Despite last month’s ‘work from home if you can’ order from the prime minister, to combat the Omicron variant of covid-19, Blowers expects another strong year from fit-out.

ISG’s other recent, notable wins in fit-out include jobs for US tech firms Facebook at King’s Cross and Apple at the Battersea Power Station redevelopment. Along with Overbury, the firm is one of the big two in the sector, a position which Blowers says is hard-earned.

“Track record says a lot,” he adds. “If it’s a huge project, you need a proven track record. For people to put trust into an organisation with no track record on a £100m-plus fit-out, that’s a difficult thing to do. 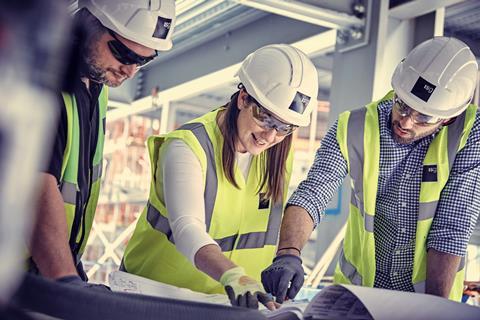 Around 400 staff can work at ISG’s head office in Aldgate but the firm employs more than 2,000 people around the country

While ISG might be one of a handful of firms that can do the mega fit-outs, there are, equally, just a handful who can do, say, tall towers. ISG’s tallest building to date is the 34-storey Nido Spitalfields scheme, a student residential block now called Chapter Spitalfields, which it began work on nearly 15 years ago.

Blowers says it would have a look at towers, but only “if a client came to us and the conditions were right. We would never say no to an opportunity but it’s [towers] not something we think about strategically.”

ISG’s office in Aldgate on the City fringe is surrounded by an increasing number of them. Around 400 staff can work there but the office has been no more than 50% full since lockdown measures were eased last summer.

Blowers admits that, like most firms, working from home has caused problems. “We lost the ability to bring people together. Did our culture suffer a bit? Yes, probably.

I’m a details person. I’m fascinated by putting this together and finding out how things work

“We’ve worked really hard to try and get that back. We made massive efforts. We had lots of events to try and get people back together again which has been good.”

His interest in construction came from his father, who worked as a civil engineer all his life. “I’m a details person. I’m fascinated by putting things together and finding out how things work so [my career] was either going to be construction or engineering.”

Cossell says he will become “a truffle hunter” and it seems certain that acquisitions and alliances will become more of a priority for ISG in the years ahead. A keen cyclist and Brentford fan, he is hoping that the change will allow room for other things in his life as well.

“It’s a mixed feeling,” he says of the decision to relinquish day-to-day running of the firm. “I’ve really enjoyed it but it is absolutely the right time.

“It will be good to get more balance into my life, more Strava [the cycling app which logs people’s rides], more Brentford. When you reach 56, you become a bit more reflective.”

ISG’s backers have been described in the US media as “very old Texas oil money”.

Owned by Cathexis, its chief executive William Harrison is the great-grandson of a Texas oilman and land baron called Dan Harrison, who died aged 94 in 1972.

Dan Harrison teamed up with fellow Texan oilman James Abercrombie and discovered the Old Ocean field in the state’s Brazoria County, regarded as one of the largest and most important gas fields on the Texas Gulf Coast.

It was found in 1934 during the so-called “gusher age” – a reference to the uncontrolled release of oil and gas from a well while drilling.

William inherited his wealth after his father, Texas rancher and billionaire Bruce, died in 2004 aged just 54. According to news reports, authorities linked his death to a swarm of bees that attacked him, causing him to fall off his tractor.

William was just 17 at the time. He has been in charge of Cathexis since June 2010.