The latest GDP figures show the UK economy growing by 0.3% in the first quarter of 2015. This was below the 0.6% rate of growth experienced in the final quarter of 2014 and this slowdown was unexpected as various sentiment surveys suggested the economy was performing strongly at the start of the year.

While the total level of output is now comfortably above its pre-recession peak, the pattern of growth within the economy is still very much focused towards the dominant service sector. The latest figures show that the service sector is now 10.1% higher than its pre-recession peak, while construction is currently 7.5% below that level. This indicates the scale of the challenge in rebalancing the economy towards manufacturing and construction.

The labour market continues to perform particularly strongly in the UK with unemployment falling to 5.5% in the latest figures. This is down from a recent high of 8.4% in 2011 and indicates the scale of the drop in the last 18 months.

The rate of inflation was -0.1% in April with the continued decline in oil price and food prices the main reasons for this. While this raised the possibility of long-term deflation most commentators expect CPI to start growing towards the end of the year as these falls will be factored in to the yearly figures.

Comparing Q1 output levels with the same period in 2014 showed a decrease of 1.1%, the first year-on-year fall since Q2 2013 (see Construction Activity by Sector below). This fall was unexpected as other surveys such as the Markit/CIPS PMI had indicated a strong start to the year.

The fall consisted of declines in January and February but growth in March.

The main reason for the quarterly fall in output are declines in public sector housing and other public work as well as falls in the commercial sector. Over the longer term however the private housing sector appears to be holding strong as output is 8.3% higher in Q1 2015 to the corresponding quarter in 2014. Additionally, the infrastructure sector has shown growth over the longer term, growing by 4.6% in the quarter. However, the commercial sector declined by 3% over the quarter and by 7.8% compared with the first quarter of 2014, which has proved a drag on overall growth. 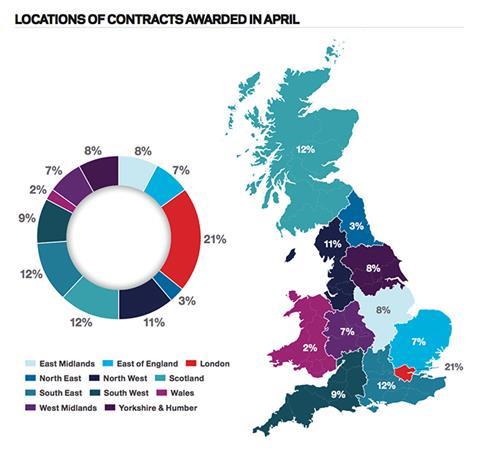 The CPA/Barbour ABI Index, which measures the level of contracts awarded using January 2010 as its base month, recorded a reading of 138 for April (see Contracts Awarded below). This is an increase from the previous month and continues to support the view that overall activity in the industry remains strong. The readings for private housing were down slightly in the month, but commercial offices increased to a reading of 129 after a dip at the end of 2014. Commercial retail increased considerably this month and the reading for industrial factories was significantly higher in April. This indicates that the pipeline of work in the private sector remains strong.

According to Barbour ABI data on all contract activity, April witnessed a decline in construction activity levels with the value of new contracts awarded £5.5bn, based on a three-month rolling average. This is a 9.8% decrease from March but an 11% increase on the value recorded in April 2014. The number of construction projects within the UK in April decreased by 1.8% on March, and were 5.7% lower than April 2014.

The main reason for the quarterly fall in output are declines in public sector housing, other public work, and the commercial sector

The majority of the contracts awarded in April by value were in London, accounting for 21% of the UK total (see Locations of Contracts Awarded). This is followed by the South-east and Scotland with 12% each of the contract value awarded. The largest contract awarded in London during the month was the Hawley Wharf project in Camden, which is a commercially led scheme valued at £115m. Another major project was a further phase of residential development in Wandsworth in the Riverside quarter, which will provide 150 residential units at a value of £69m. In the South-east the largest value project awarded was the Isle of Sheppey distribution centre for Aldi, which will provide over 60,000m2 of floor space at a project value of £90m. In Scotland, the highest value project awarded was Marischal Square, a £107m commercial project in Aberdeen to deliver a 15-storey office block.

Residential had the highest proportion of contracts awarded by value in April with 36% of the total value of projects awarded. Contracts such as Wandsworth Riverside Quarter and the University of Cambridge key worker development in North-west Cambridge contribute to the sector’s strong presence in April. Education had a strong month in April, accounting for 14% of the value awarded. The largest contract awarded was a new teaching facility for the University of the West of England valued at £50m. 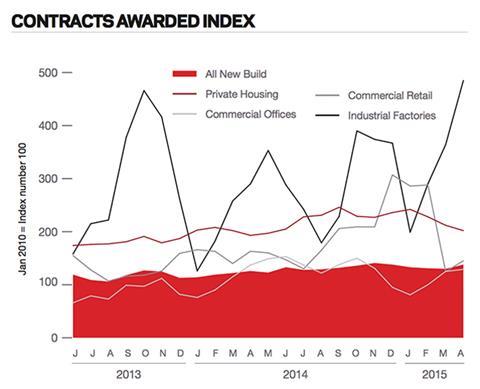 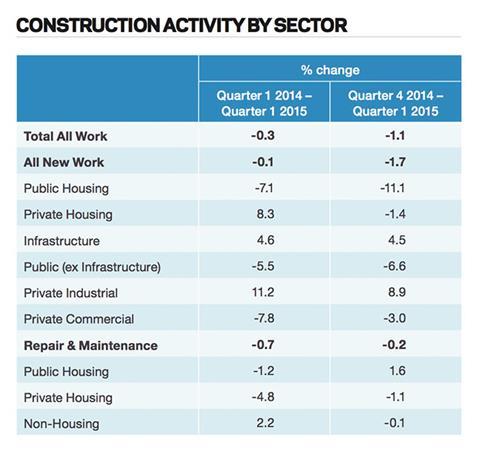 The industrial sector experienced a slight decline in contracts awarded in April but the value of work is still significantly higher than the same time in 2014.

Activity in the industrial sector decreased in April with the value of contracts awarded at £567m, based on a three-month rolling average. This equates to a decline of 9.5% on the value in March but is 59.1% above the figure recorded this time last year. In the three months to April the total value of contracts was £1.8bn, which was 48.9% higher than the previous three months and 77.8% higher than the same quarter last year. This indicates the strong start to the year that the sector has experienced.

The North-west is the region with the highest value of activity this month with 25.9% of the contracts awarded, an increase of 16.6% on April 2014. This was principally due to the award of the Amazon distribution centre in Ellesmere Port, which has an estimated value of £100m and is set to deliver circa 116,000m2 of distribution floor space. 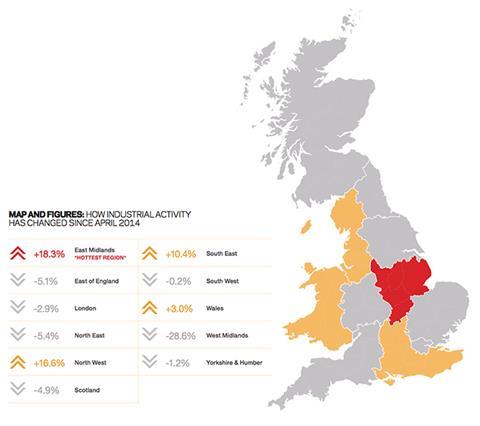 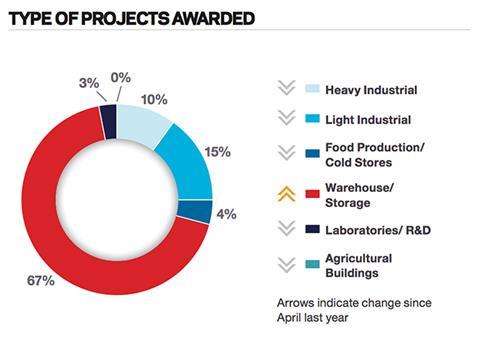 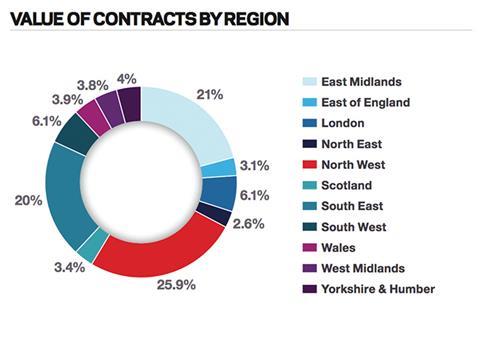 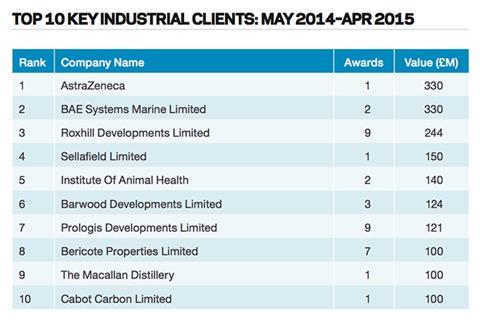