The latest GDP figures for the UK economy were released in the last month and they showed that the UK economy had grown by 0.7% in the second quarter of 2015.

This was above the 0.4% rate of growth experienced in the first quarter of 2015 and is an indication that the economy regained its momentum over the spring months.

The labour market continues to perform particularly strongly in the UK. However, it is notable that there has been a slight increase in the levels of unemployment over the past two months. The rate of unemployment is currently 5.6% for those aged 16 and over, up from 5.5% in March 2015.

The rate of inflation was 0.1% in July with the continued decline in oil, clothing and food prices the main reasons for this. Most commentators expect inflation to start growing towards the end of the year as these falls will be factored into the yearly change figures.

Comparing Q2 output levels with the same period in 2014 showed an increase of 2.4%. The decline consisted of a flat April, decline in May, but growth in June.

The main reason for the quarterly increase in output is increases in new private housing and new infrastructure. New private housing increased by 11.6% compared with Q2 2015 and infrastructure increased by 16.7% over the same period. However, the commercial sector declined by 0.3% over the quarter and by 1.2% compared with the second quarter of 2014, which has proved a drag on overall growth (see Construction activity by sector, right).

The CPA/Barbour ABI Index, which measures the level of contracts awarded using January 2010 as its base month, recorded a reading of 142 for July. This is an increase from the previous month and continues to support the view that overall activity in the industry remains strong. The readings for private housing increased in the month after a slight decrease in June. Commercial offices increased with a reading of 100 compared to 96 last month. However, commercial retail increased in July with a reading of 143 although industrial factories recorded a reading of 370, down from 468 in June (see Contracts awarded, right).

According to Barbour ABI data on all contract activity, July witnessed an increase in construction activity levels with the value of new contracts awarded £6.5bn, based on a three-month rolling average.

The highest proportion of the contracts awarded in July by value were in London, accounting 20% of the UK total. This is followed by the North-west with 16% of contract value awarded and the South-east with 11% of value (see Locations of contracts awarded, right). The strong performance of London is primarily due to the award of the £300m contract at 22-24 Bishopsgate. This major commercially led project will also provide retail and leisure uses and is the second major contract of its type awarded this summer after Wood Wharf in June. In the North-west a major renewable energy project, the Burbo Bank offshore wind farm extension, was the highest value contract awarded in July. This contract has an estimated value of £250m and is due to be completed over two years.

Infrastructure had the highest proportion of contracts awarded by value in July with 27% of the total value of projects awarded, keeping it in line with its strong performance in recent months. Renewable energy projects were the main factor in its strong performance with the Burbo Bank offshore wind farm and energy-from-waste facility in Beddington worth £200m both awarded in July. The residential sector also had a strong month in July, accounting for 26% of the value awarded.

Locations of contracts awarded in July 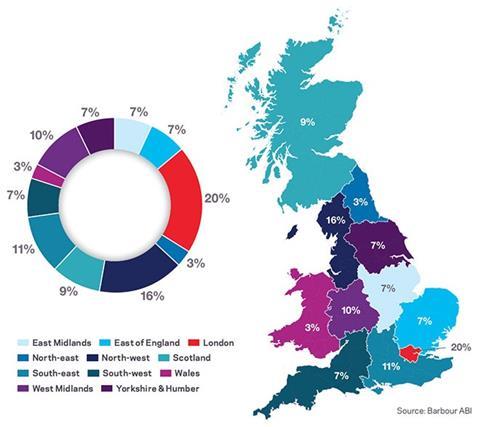 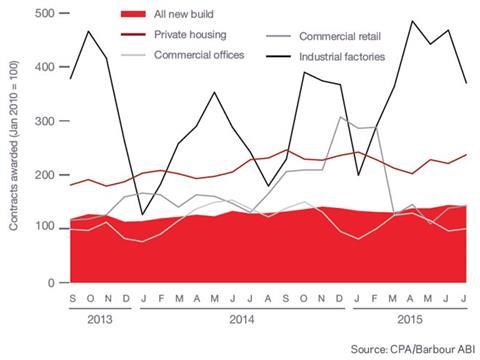 Renewable energy and road projects awarded in the month saw the value of infrastructure contracts increase and values significantly higher than this time in 2014.

The North-west dominated infrastructure contracts in July, accounting for 32.4% of the value awarded, a 24.5% increase on July 2014. London was the second most prominent location in July with 16% of contract value, a 12.4% increase from June 2014.

Maps and figures: How infrastructure activity has changed since July 2014 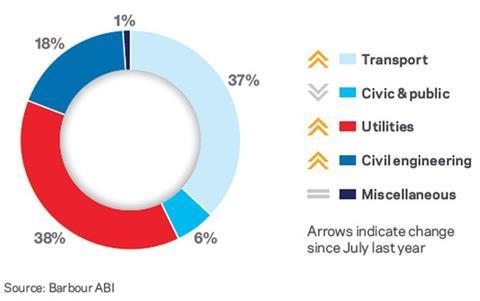 Value of contracts by region 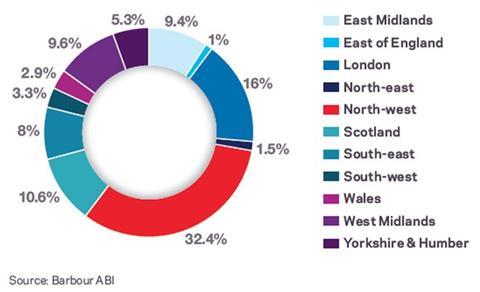