Despite the vote to leave the European Union, construction output remained healthy in 2016, but the value of contract awards declined over the year 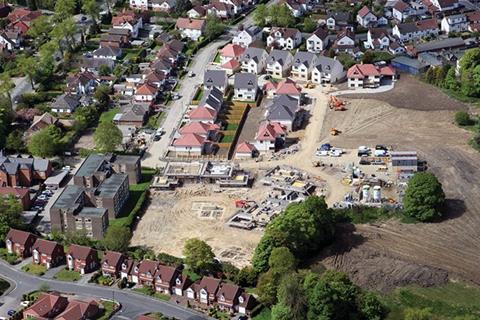 UK GDP growth in Q3 2016 was unchanged from its initial estimate at 0.5%, with the Bank of England forecasting the economy will have grown by 2.2% in 2016 overall, the same growth rate as 2015. The anticipated negative effect of the Brexit vote did not materialise, with most surveys detecting a dip in activity in the immediate aftermath of the vote which was subsequently reversed.

However, the value of sterling has fallen significantly since the Brexit vote, with the markets reacting to the possibility of the UK leaving the single market. It reached its lowest level against the US dollar in 10 weeks, trading at $1.20 (£0.97) on the 11 January. The currency is expected to remain around this level, and possibly fall even further, while Britain’s future trading position remains unclear. It is predicted that the level could fall to $1.15 by the time Article 50 is triggered and the current trajectory suggests this is likely.

The fall in the value of the pound is expected to herald in a period of higher inflation and there is evidence of this in the latest figures. The latest data release shows that the Consumer Price Index rose to 1.6 % in December, compared with 0.5% in June before the referendum. The increase is attributable to higher prices for clothing, food and air fares.

The fall in the value of sterling has been the most tangible impact of the Brexit vote thus far but the impact on GDP has been negligible. Estimates of Brexit’s impact range from a long-term loss of 3% of GDP to more than 7%, but that very much depends on the nature of the trading arrangements agreed for the post-European Union era.

The latest figures from the Office for National Statistics (ONS) show that the construction sector in the UK shrank by 0.2% between October and November 2016. Comparing output levels with November 2015 showed an increase of 1.5%.

It is clear that the housing sector remains the main component of growth within the industry over the longer term. In particular, private housing output increased by 12.5% in November from the corresponding month in 2015. Output in the private commercial sector increased slightly by 2.9% year-on-year; however, activity in the industrial sector was 11.6% lower. Infrastructure also declined slightly over the year, with activity 1.6% lower in November 2016 compared with 2015, which indicates mixed performance over the year for sector output (see construction activity by sector chart).

The CPA/Barbour ABI Index, which measures the level of contracts awarded using January 2010 as its base month, recorded a reading of 127 for December (see contracts awarded graph). This is a slight decrease from November but still indicates a growing industry. The readings for private housing increased in December, but there were declines in industrial factories, commercial retail and commercial offices.

According to Barbour ABI data on all contract activity, the value of all construction contracts awarded in the UK was £70.6bn in 2016, a decrease of 5% compared with 2015. This figure is in marked contrast to the previous year when the value of projects increased by 15.7%. It breaks the pattern over the last five years when annual growth was recorded in contract values.

Major contracts awarded in the South-east this year include the M4 junction 3-12 smart motorway scheme valued at £672.5m. Scotland also featured prominently in 2016, accounting for 12% of the value of contracts awarded during the year. Other major projects awarded in 2016 included the East Anglia offshore wind farm, off of the Norfolk coast. This is a 714MW wind farm, which has a construction value of £1.8bn, with completion due in September 2018. This is not the only offshore wind farm awarded in the region in 2016, with the Galloper offshore wind farm also reaching contract stage. This development is located off the Suffolk coast and is valued at £750m with an output of 336MW, further emphasising the region’s appeal for developments of this kind.

Residential had the highest proportion of contracts awarded by value in 2016, with 33% of the total. Examples of major residential projects awarded in 2016 include the Greenwich Peninsula development, which is to deliver 464 apartments in South-east London and is valued at £150m. Outside of London, project examples include the Dalmarnock Riverside development in Glasgow, which is set to deliver 550 units at a contract value of £81.2m.

Infrastructure also had a strong year, accounting for 27% of the total value awarded. The number of large-value offshore wind farm projects has been one of the major reasons for the infrastructure sector performing so well in 2016. In addition, road projects, and in particular smart motorway schemes, helped the infrastructure figures in 2016. Examples of major projects in 2016 include the expansion of Terminal 2 at Manchester airport. 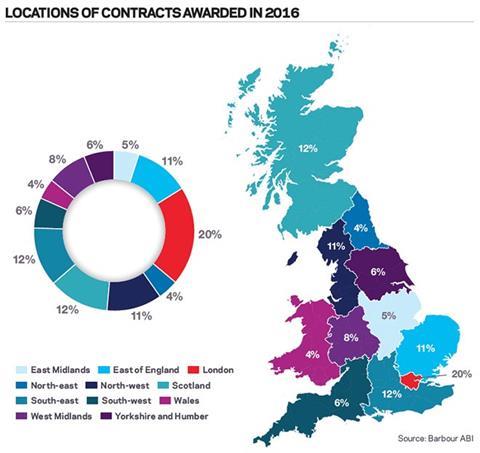 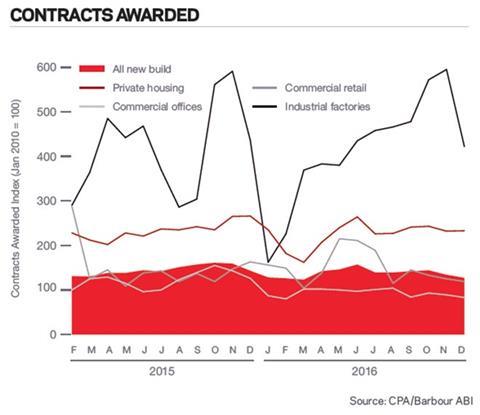 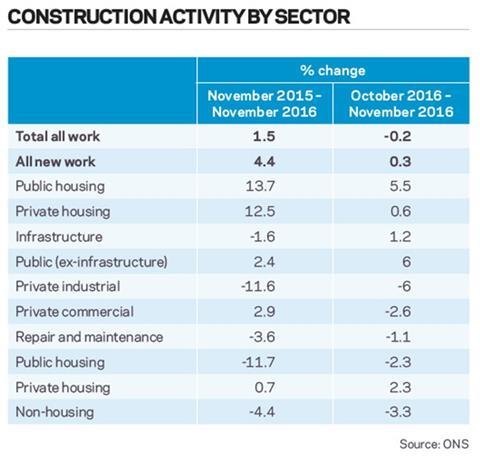 Activity in the residential sector was higher in 2016 with the total value of contracts at £23.6bn, an increase of 11.1% on the value recorded for 2015. Residential continues to be the dominant sector in construction and growth increased from 3% in 2015, indicating the strong demand conditions that exist due to continuing consumer confidence and government schemes such as Help to Buy.

As 2016 drew to a close, annual house price increases remained similar to 2015. There were changes at a regional level, with the highest increases recorded in the South-east and East Anglia as opposed to London in recent years, although this has not been reflected in the data for last year (shown below). The latest house price indices for December from Nationwide showed that average house prices are rising at 4.5% annually, the same as December 2015. The Halifax Bank reported annual house price rises recorded at 6.5% in December, with the survey recording a pick up in price increases in the last two months of the year.

While Bank of England data confirmed that mortgage lending decreased by 1.7% in November 2016 compared with November 2015, Taylor Wimpey achieved a record profit margin of over 20.8% in the year, suggesting favourable conditions remain in the housing market for the major housebuilders. 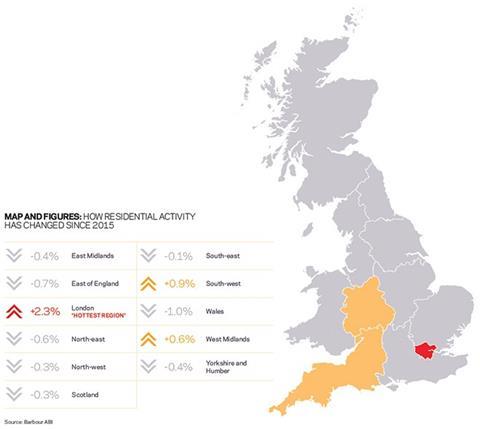 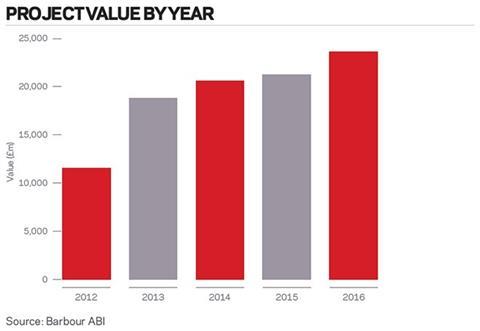 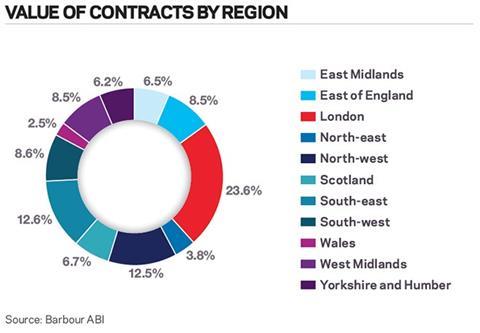 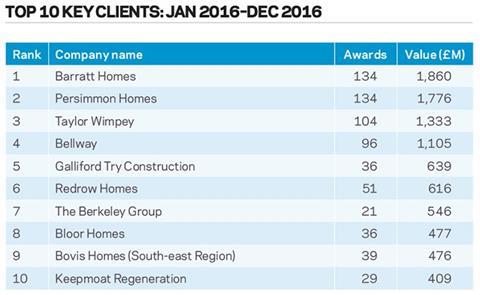 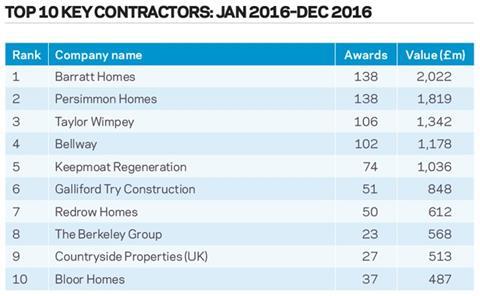