Things are still on the up but are we witnessing a slowdown? And is there any way to rebalance the UK economy away from the service sector? Michael Dall discusses the highlights of Barbour ABI’s monthly Economic & Construction Market Review 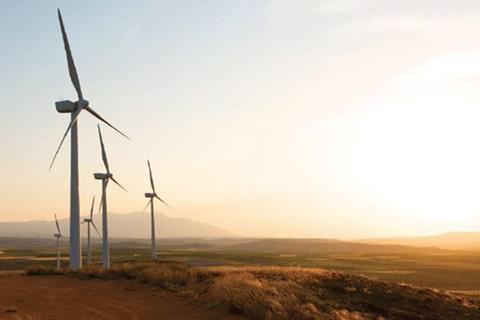 The latest GDP figures for the UK economy were released in the last month and showed that it had grown by 0.4% in the first quarter of 2016. This was below the 0.6% rate of growth experienced in the final quarter of 2015, but the figure was largely expected since sentiment surveys had detected a cooling of economic activity at the start of the year.

The rate of inflation decreased to 0.3% in May with the falls in the price of airfare and clothing the main reasons for the figure. It is worth noting that the rate of 0.3% is still well below the 2% target rate set by the Bank of England.

The latest figures from the Office for National Statistics (ONS) indicate the construction sector in the UK declined by 1.1% between Q4 2015 and Q1 2016. Comparing Q1 output levels with the same period in 2015 showed a decrease of 1.9%. This fall was expected as other surveys such as the Markit/CIPS PMI had indicated a subdued start to the year.

The main reason for the quarterly fall in output are declines in the infrastructure and private industrial sectors, as well as falls in the public sector more generally. Over the longer term, however, the private housing sector appears to be holding strong as output is 4.9% higher in Q1 2016 compared to the corresponding quarter in 2015.

However, the infrastructure sector declined by 5.6% over the quarter and by 8.1% compared to the first quarter of 2015 which has proved a drag on overall growth (see Construction activity by sector).

The CPA/Barbour ABI Index, which measures the level of contracts awarded using January 2010 as its base month, recorded a reading of 142 for April (see Contracts awarded). This is an increase from the previous month and continues to support the view that overall activity in the industry remains strong.

The readings for private housing were up significantly in the month, but commercial offices remained at last month’s level of 102. Commercial retail increased considerably this month and the reading for industrial factories was significantly higher in April. This indicates that the pipeline of work in the private sector remains healthy.

According to Barbour ABI data on all contract activity, April witnessed an increase in construction levels, with the value of new contracts awarded £6.1bn, based on a three-month rolling average. This is a 0.9% increase from March and a 10% increase on the value recorded in April 2015.

The number of construction projects within the UK in April increased by 10.5% on March, and were 11% lower than April 2015.

The main reason for Scotland’s figures was the award to develop the Stronelairg wind farm in the Highlands valued at £300m. It is yet more evidence of the burgeoning renewables sector in Scotland and this is further shown with the award of the contract to construct the Harburnhead wind farm in West Lothian valued at £99m. Further construction work awarded for the decommissioning of the Sellafield nuclear plant in Cumbria valued at £400m was the largest contract in the North-west in April, explaining its strong performance in the month.

Infrastructure had the highest proportion of contracts awarded by value in April with 33% of the total. Contracts at Sellafield and for wind farms in Scotland are the main reason for the strong performance in April. The residential sector accounted for 32% of the contract value awarded. 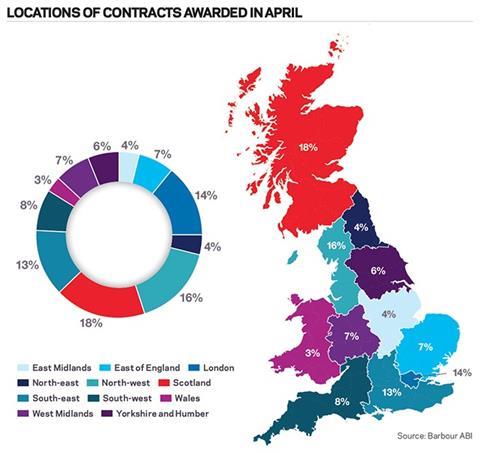 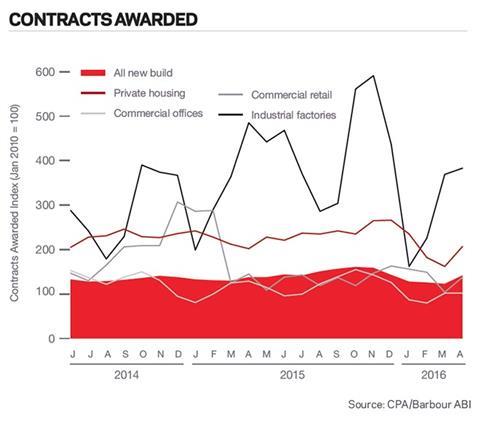 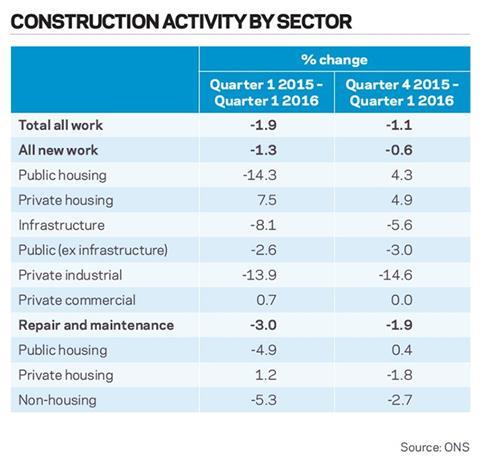 Activity in the residential sector increased in April with the total value valued at £2.1bn based on a three-month rolling average. This is an 8.8% increase compared to March and 26.4% higher than April 2015. The number of units associated with residential contracts increased 14.4% between March and April based on a three-month rolling average, but are 15.1% lower than April 2015.

The house price indices for April from building society Nationwide show average house prices are rising at 4.9% annually, a decrease from 5.7% in March. This was below the rate expected by analysts and was attributed to a surge in activity in March because of stamp duty changes which tailed off in April. Major housebuilders still report strong trading conditions with Barratt’s forward sales up 9.7% on last year, according to a trading update.

The South-east is the main location of activity in the residential sector, accounting for 17.8% of the value of contracts awarded, an increase of 2.9% from the same month last year (see Type of projects awarded and Value of contracts by region). 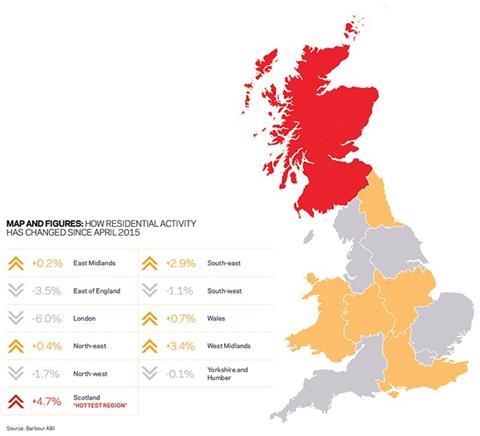 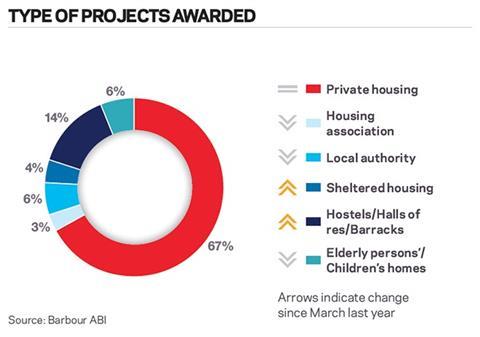 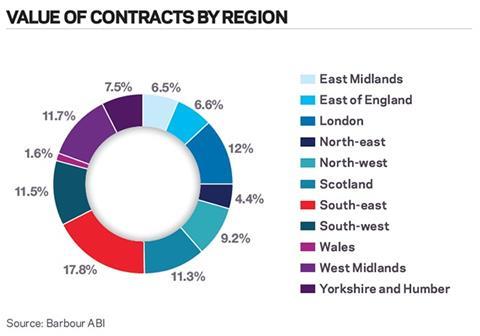 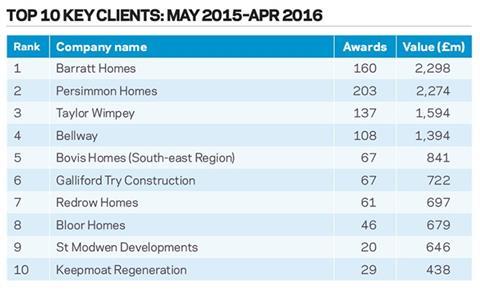 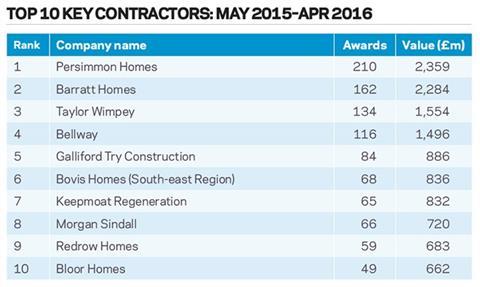