Market review: Slow off the mark

Construction output levels saw a further slowdown in Q4 but were still up on the same period last year. Private housing and infrastructure are the bright lights for the year ahead

The latest GDP figures for the UK economy were released in the last month and they showed that the UK economy had grown by 0.5% in the final quarter of 2015. This was slightly higher than the 0.4% rate of growth experienced in the third quarter and meant that for the full year the economy grew by 2.2%, well below the 2.9% recorded in 2014.

This indicates the scale of the challenge of rebalancing the economy towards manufacturing and construction given the dominance of the service sector.

Putting the UK’s economic recovery in the context of the other G7 economies suggests that since 2008 the UK has had a middling performance. While the USA and Canada have grown the most since the start of 2008, the UK had more subdued growth from 2010 to 2013 but one of the fastest growing since then. 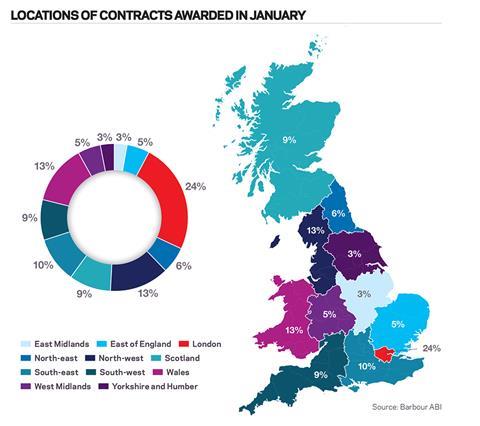 The latest figures from the Office for National Statistics (ONS) show that the construction sector decreased by 0.4% between September Q3 and Q4 2015. Comparing output levels with Q4 last year showed an increase of 0.4%.

Infrastructure was down 3.9% on Q3 but remained up 20.7% on the same quarter last year. With some large projects, headed by HS2 and Thames Tideway Tunnel, it’s hoped that this sector will provide a boost to output levels over the next couple of years.

The CPA/Barbour ABI Index, which measures the level of contracts awarded using January 2010 as its base month, recorded a reading of 128 for October. This is a continued decrease from the previous month. The readings for private housing remain high at 235, although down from a level of 265 for the previous two months.

Commercial offices activity had a marked slowdown with a level of only 87. With plenty of promised work in the pipeline it is hoped that the remainder of 2016 will see a pick up in activity.

The Construction Products Association recently updated its forecasts for 2016 and beyond and the industry is now predicted to grow by 3.6% this year and 3.8% next year on the back of continuing strength in the new build private residential sector and increasing activity in the infrastructure sector.

According to Barbour ABI data on all contract activity, January witnessed a decrease in construction activity levels with the value of new contracts awarded at £5.3bn, based on a three-month rolling average. This is an 8.6% decrease from December and a 3.7% decrease on the value recorded in January 2015. The number of construction projects within the UK in January increased by 26.1% on December, but were 18.3% lower than January 2015. 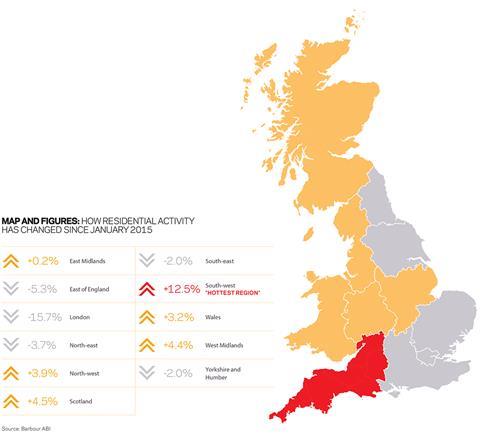 London received the highest proportion of construction contracts by region, accounting for 24% of the UK total. In London, the award of the 22 Bishopsgate contract to Brookfield Multiplex at a value of £500m was the largest project in January by construction value.

The North-west had the second highest portion of contract activity by value in January, accounting for 13% of the value awarded.

The contract to develop a new pharmaceutical HQ for GSK in Ulverston, Cumbria was the highest value contract in the region in January with an estimated construction cost of £350m. Wales followed closely with the next highest proportion of contracts by value, also with 13% of contract value awarded in January.

The largest project awarded was the Wylfa nuclear power station in Anglesey, which agreed contracts valued at £450m for the construction element.

Both residential and infrastructure sectors received the highest proportion of contracts awarded by value in January with 23% of the total value of projects awarded. Residential projects such as the Streatham Hill development in South-west London, valued at £60m, and the Britannia Music site in Ilford, valued at £50m, were the two largest projects awarded.

The Wylfa nuclear power station in Wales was the largest infrastructure project awarded as well as the Port Clarence biomass plant in Cleveland, valued at £200m. Commercial and retail accounted for 19% of contract values awarded, with 22 Bishopsgate in the City of London the largest project in January.Residential activity decreased in January 6.1% compared to December and is 14.6% lower than January 2015, indicating that new contract activity for units in the residential sector is lower than last year. The value of projects associated with residential contracts awarded decreased by 32.9% between December and January based on a three-month rolling average, and by 21.4% on January 2015. These statistics suggest a slower start for residential at contract award stage. However, the numbers of housing completions are rising, suggesting building activity in the sector remains strong. Given that the long-term fundamentals that have been driving growth are set to continue, Barbour ABI remains confident of the longer term growth prospects for the sector.

House price indices for January from Halifax showed that average prices are increasing at 9.7% annually in the three months to January, up from 9.5% last month, and 9.0% this time last year. Nationwide reported annual house price rises of 4.4%, compared with 4.5% in December.

London was the main location of activity in the residential sector this month, accounting for 22.4% of the value of contracts awarded, a decrease of 15.7% in the same month last year. However, in a further sign residential activity is increasing its geographical spread, the South-west accounted for 20% of contract value – a 12.5% increase from the same month in 2015. The North-west also had a high share, accounting for 15% of the value awarded.