Last week Barbour ABI launched its monthly Economic & Construction Market Review, pulling together data from many sources as well as its own database. Here we present highlights from the review, including sector and regional statistics

The latest growth figures for the UK economy showed that GDP increased by 0.8% in Q3, with construction estimated to have grown by 1.7% in this period. This growth supports prevailing sentiment in the economy, and in the construction sector specifically, that a more sustained period of economic growth is about to take hold after the poor performance in recent years. This month a series of studies and barometers detected an improving economic environment including:

The official statistics, combined with wider indicators, provides a more positive economic outlook than recent months and years. However, it is worth noting that in the context of pre-recession levels of activity, the UK economy is still significantly below its capacity. The current levels of GDP are 2.5% below those recorded at Q1 2008, prior to the start of the economic decline.

An analysis of the levels of unemployment provides another indicator of the current health of the UK economy. Unemployment fell from 7.7% to 7.6% between August and September 2013 with 2.47 million now unemployed in the UK. This compares with the January 2008 unemployment level of 1.52 million, 5.2% of the available workforce. The Bank of England’s Forward Guidance has suggested raising interest rates when unemployment reaches 7%. Given the recent fall in unemployment the probability of that happening before the 2016 estimate originally set the by the Bank have increased.

The level of government debt as a percentage of GDP is also significantly different compared with pre-recession levels. Public Sector Net Debt stands at 75.9% of GDP in September 2013 whereas in January 2008 it was 35.5%.

In summary, the UK economic outlook has certainly been more upbeat recently with output rising, unemployment falling and inflation remaining around its target level. However this has to be put in the context of the macroeconomic indicators that show the gap between current economic performance and pre-crisis performance. The downside risks from the eurozone remain for the UK, with growth weak and the risk of deflation in some countries remaining. In addition the consistent disagreements on the US budget as well as declining growth levels in China continue to act as external threats to UK economic recovery.

Domestically, there is concern that the levels of productivity per worker will constrain the UK recovery and this remains a problem that will likely affect overall performance in the future. In addition the levels of UK economic debt and the continuation of austerity measures will also prove a strain on growth. It is Barbour ABI’s view that while recent news has been positive the scale of future economic growth has still to be determined and the first half of 2014 will be critical in assessing long-term growth potential. 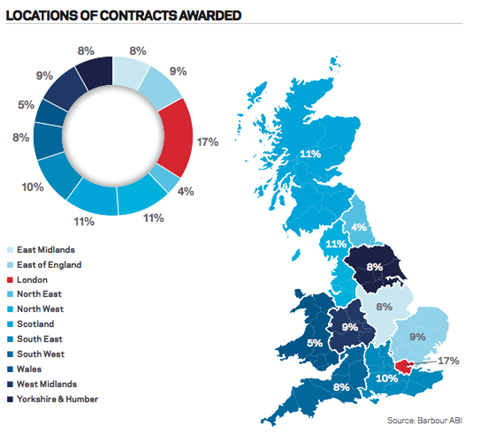 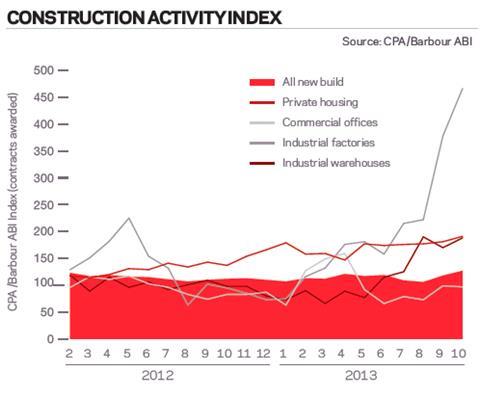 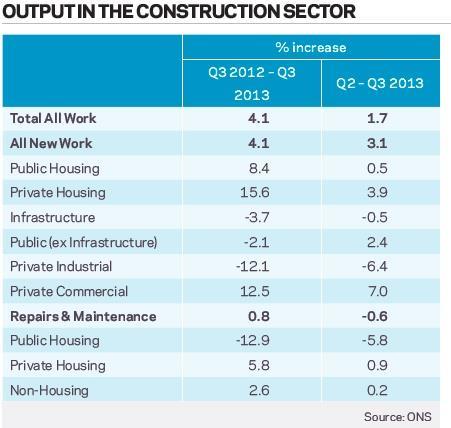 The latest figures from the Office for National Statistics (ONS) show that the construction sector grew by 1.7% between Q2 and Q3 2013. This consisted of a strong July, a stable August and a lower September. Comparing output levels with the same period last year showed an increase of 4.1%.

It is clear that it is the housing and commercial sectors that are driving growth within the industry. Private housing increased by 3.9% from the previous quarter and 15.6% from the corresponding quarter in 2012. Similarly, private commercial showed a 7% quarterly increase and 12.5% yearly change.

This suggests that Help to Buy continues to impact positively upon the residential sector but it is even more encouraging that the private commercial sector is growing at similarly strong levels. Infrastructure remains challenged with growth in this sector vital for sustained growth prospects in the future.

However, a closer analysis of construction output shows that levels are still 13.3% below pre-recession peak indicating the difficult times endured by the sector in recent years.

The UK economic outlook has certainly been more upbeat recently with output rising, unemployment falling and inflation remaining around its target level

The latest activity indices in the construction sector show that the levels of contracts awarded rose in October. The CPA/Barbour ABI Index, which measures the level of contracts awarded using January 2010 as its base month, recorded a reading of 127 for October, supporting the view that activity in the industry remains strong. As well as private housing, contracts awarded for factories and warehouses also rose significantly over the last three months suggesting a brighter outlook for the private industrial sector than current output levels suggest.

The improving statistics and sentiment surrounding the construction industry has led to an upgrading in forecasts for its future performance by the Construction Products Association (CPA). The poor performance in the first quarter of this year is likely to hamper overall output levels but growth of 2.7% and 4.6% is forecast for 2014 and 2015, driven primarily by a continued increase in the levels of private housebuilding.

While this is welcome news for the industry it is important to note that it will be 2017 before the industry exceeds the levels of activity occurring in 2007 before the recession took hold.

According to Barbour ABI data on all contract activity, October was a strong month for construction with the value of new contracts awarded £5.7bn, based on a three month rolling average. This is an increase of 9.7% on September and a 48.8% increase on the value recorded in October 2012, an indication of the upturn in activity in construction. The number of construction projects within the UK in October was 17.8% higher than September 2013 and 42.5% higher than October 2012.

Residential remains the dominant type of project by value in the UK accounting for 44% of the contracts awarded in October. Of the remaining sectors infrastructure was the most significant with 27% of the total value followed by commercial and retail (9%) and education (8%). 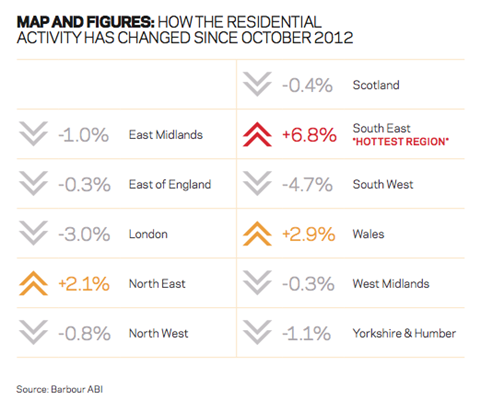 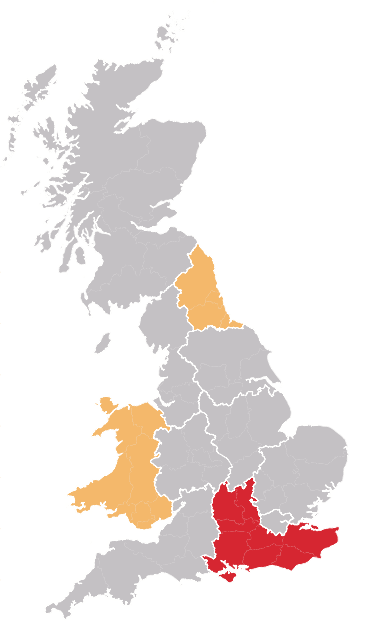 The residential sector continued its recent growth in the month of October and continues to be the main contributor to the rise in the new contract levels.

The residential sector experienced high levels of activity in October with a total value in orders of £1.9bn, based on a three month rolling average. This is 16.1% higher than September but 89.1% higher than October 2012, a significant rise. The levels of contracts awarded in residential increased significantly in the first six months of this year, and while they dipped over July and August, the upward trajectory resumed in September and October.

The Help to Buy scheme is clearly having a strong impact on this sector and the second phase of the scheme has been brought forward from January 2014. Phase 1 offers an equity loan of up to 20% of the value of a new build home, interest free for the first five years. Phase 2 is the mortgage guarantee which allows the purchaser to take a mortgage of up to 95% with the government acting as guarantor to the lender. Importantly this second phase applies to existing and new homes.

This scheme continues to attract much debate, with some fearing it could contribute to another house price bubble, while others view it as a boon to the housebuilding industry. While its long-term impact is the subject of conjecture, its short-term impact on the levels of housebuilding activity is clear.

As expected it is London and the South-east that is the main location of activity in this sector, together accounting for around 33% of the value of contracts awarded this month (see opposite page). In London this decreased by 3% from October 2012 though the South-east of England increased by 6.8% in the same period.

The CPA forecasts for the sector show that private housing is set to continue its growth levels - both for new build and repair and maintenance - this year and into 2014 and beyond. Public housing is set to stay relatively stable but to increase slightly after 2014 once investment in the sector returns. 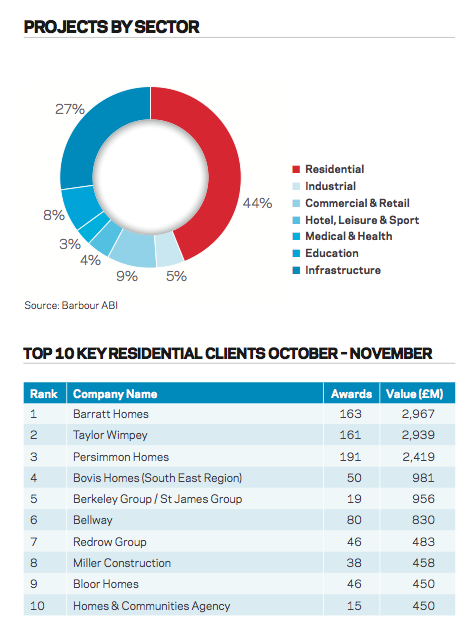 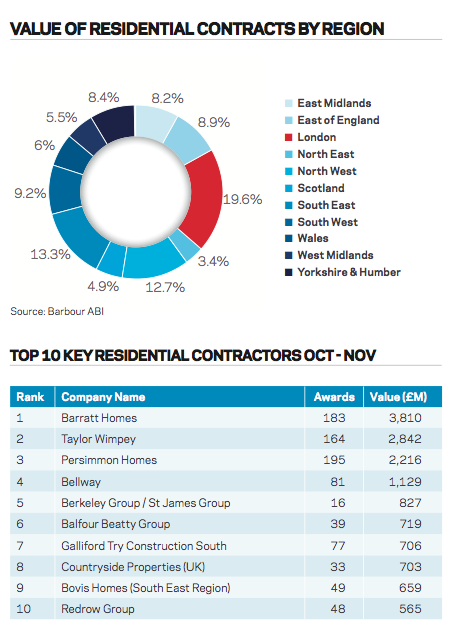