US property investor Hines has brought in veteran developers Stuart Lipton and Peter Rogers and appointed Foster & Partners to come up with fresh plans for a 1.8-acre site which it has bought on London’s South Bank.

Hines, which announced the off-market purchase of 18 Blackfriars yesterday but did not disclose the price tag, said it had asked Lipton and Rogers, whose firm Lipton Rogers was behind the 22 Bishopsgate tower completed last year, to “bring their design and delivery experience” to the “super prime” location.

The appointment of Fosters spells the end for Wilkinson Eyre and Brisac Gonzalez which designed two consented schemes for previous owners of the long-empty site at the southern end of Blackfriars Bridge, most recently in July 2017 for Malaysia’s Black Pearl. 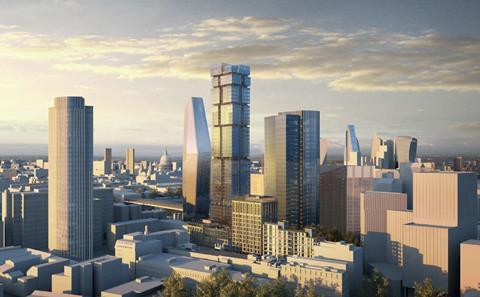 This scheme was for six buildings ranging from five to 53 storeys – taller than neighbouring One Blackfriars, Simpson Haugh’s Boomerang built by Multiplex, and PLP’s replacement for Ludgate House, the Bankside Yards scheme, also being built by Multiplex.

The buildings would have contained 111,500sq m of offices, a hotel, retail and residential. Brisac Gonzalez’s 34-storey building was to have provided offices above a ground-floor music venue.

That scheme replaced a similar proposal known as 20 Blackfriars Road, also designed by Wilkinson Eyre, which was consented in 2009 after a public inquiry, and included a 42-storey tower. Wilkinson Eyre was later dropped by developer Circleplane Ltd but later returned to the rebranded site.

The site has been vacant since 2016 when several buildings including Owen Williams’ Sainsbury’s sausage factory, England’s first structure built from poured-in-place concrete, were demolished.

Ross Blair, Hines UK’s senior managing director, described the site as “undoubtedly one of the most sought-after development opportunities in London” and predicted it would be worth £1bn once completed.

Hines, which is also working on a number of retail and residential projects in the West End, said it would issue more details in due course but that it had appointed Fosters as project architect with a brief to design a “dynamic” mixed-use development.