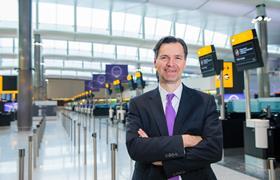 The Association for Consultancy and Engineering (ACE) has boosted its advisory board with four new appointments.

John Holland-Kaye (pictured) is chief executive of Heathrow. He joined the airport in 2009 as commercial director before being promoted to development director and was responsible for the £1bn investment in the airport which included delivering the new Terminal 2 in 2014. He previously held senior positions at Taylor Wimpey, Taylor Woodrow and Bass Brewers.

Geoffrey Spence is global head of infrastructure, resources and energy at Lloyds Bank, and during his time as chief executive of infrastructure at HM Treasury, he oversaw the creation of the National Infrastructure Plan. He previously held roles at Deutsche Bank and HSBC and was a special advisor to the chancellor on financial stability and business policy between 2008 and 2010.

Liz Peace is chairman of the Old Oak and Park Royal Development Corporation. She has more than 35 years’ experience in government and the property sector and was chief executive of the British Property Federation. She is also honorary president of the Property Litigation Association and chair of the Centre for London think-tank.

Katrina Haley is managing director, head of structured bonds, infrastructure and real estate at HSBC. She is responsible for capital markets funding for transport infrastructure, energy, leveraged finance, oil and gas and physical assets such as aircraft and real estate.

Lady Barbara Judge, advisory board chairman at ACE, said: “As well as their obvious skills and experience, they bring unique perspectives from the worlds of finance, major projects, urbanisation and infrastructure investment – all of which will be crucial in guiding the association through some very exciting years ahead.”