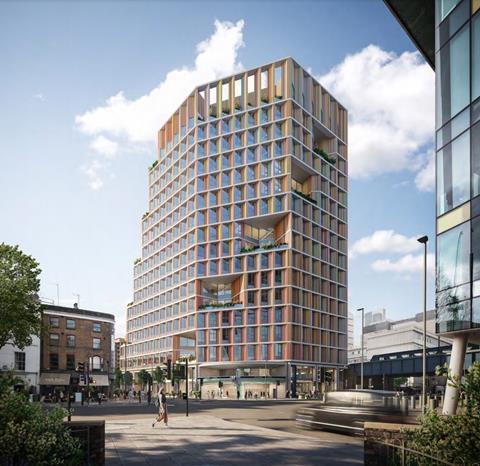 AHMM’s proposals for a 17-storey office building on top of Richard MacCormac’s Southwark Tube station have been approved.

Southwark Council’s planning committee OK’d the scheme which will see around 200,000 sq ft of office space plus two shop units built beside the station entrance on the corner of Blackfriars Road and The Cut.

The project is part of a land swap that will see a 15-storey block of flats designed by Bell Phillips built on a neighbouring council-owned estate. That scheme, where The Cut meets Hatfields, was approved less than a month ago, paving the way for last week’s decision.

The Southwark over-station project has been a long time in development. Back in 2017 AHMM was sent back to the drawing board after its proposal for a 30-storey block of 300 flats – which would have involved demolishing Richard MacCormac’s circular ticket hall – fell through.

TfL said market conditions had changed but it also faced considerable opposition from fans of the station which is part of the Jubilee line extension (JLE) masterminded by TfL’s chief architect Roland Paoletti. It was MacCormac Jamieson Prichard’s first public commission and opened in 1999.

It was designed with an over-station development in mind but was said to be structurally capable of supporting only a dozen storeys or so, a similar height to Palestra, Will Alsop’s cantilevered glass box, opposite.

AHMM’s approved plans – which will be clad in coloured panels refencing different Tube lines – are significantly shorter than the original proposal, meaning the ticket hall does not now face demolition.

Andrew Crow, senior development manager at TfL, said the group was confident the pandemic had not significantly dented demand for quality office space