Consultant becomes the quantity surveyor on the project 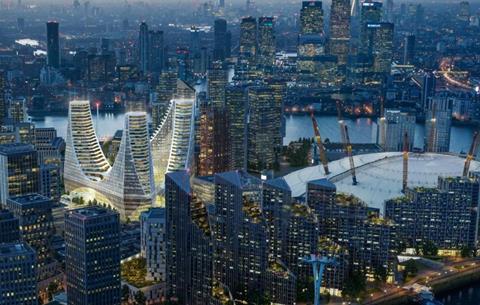 The consultant is also acting as the project manager on the scheme designed by Spanish star architect Santiago Calatrava which was unveiled at the beginning of the year.

The scheme, which is part of Knight Dragon’s wider £8.4bn Greenwich Peninsula development, comprises three towers, a hotel, office space and a 500ft glass galleria built above North Greenwich tube station next to the O2 Arena.

In addition to Peninsula Place, Allies & Morrison has designed two further buildings which is part of a wider plan to provide 800 homes, of which 200 will be affordable.

Knight Dragon chief executive Richard Margree told Building at the unveiling of the plans for Peninsula Place that the developer would aim to start work on the scheme either at the end of this year or beginning of next year. It is anticipated being a four-year build ending in 2021.

The entire 150-acre development was given the go-ahead by former London Mayor Boris Johnson in November 2015 after it took over the whole project from joint venture partner Quintain in 2012. In total the scheme is aiming to provide nearly 16,000 new homes in seven new neighbourhoods and become home to a new film studio.

The wider project team has also included Adamson Associates as executive architect, WSP as traffic engineer, Aecom as MEP engineer and Reardon Smith as the hotel architect. Calatrava’s practice will also lead on structural engineering, with Meinhardt acting as structural engineer of record.

Paul Allen, co-founding partner at Alinea, said: “Knight Dragaon wanted a combined PM and QS delivery model and as we don’t offer PM services, we agreed to step aside. We wish KD and the team all the best for the project going forward.”

Arcadis and Knight Dragon have been contacted for comment.