Assael has cleared a planning hurdle for a £144m three-tower scheme above the new Nine Elms tube station five years after a similar Grimshaw-designed proposal on the site was approved.

The application is now due to head to the GLA for final sign-off.

It will almost entirely replace Grimshaw’s aborted 332-home scheme for the site, which was given the go-ahead in March 2016. 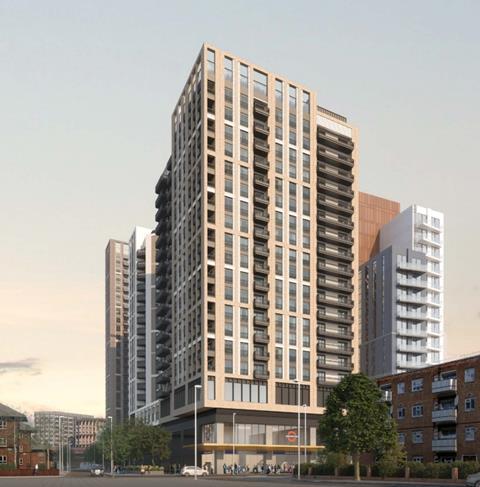 The Assael scheme, pictured, replaces a former proposal by Grimshaw which was originally given the green light in 2016

Just a small slice of Grimshaw’s original proposal has survived to the north of the new application site, consisting of an office block which is slated for possible future construction following the completion of Assael’s scheme.

Assael’s new proposals consist of three triangular towers ranging in height from 74m to 89m, with two of the towers sharing a podium sitting directly above the new Grimshaw-designed Nine Elms tube station due to complete this year as part of the Northern line extension to Battersea Power Station.

The development will add an extra 147 residential units compared to Grimshaw’s proposals, with 40% of the build-to-rent homes being affordable.

The council’s report on the proposals also welcomed “contextually appropriate” changes s in the new scheme, which has integrated the brick facade design of the tube station including a “calmer” palette of pale to mid-brown with oxblood-coloured glazed accent bricks.

It is the second of five schemes for CLL, Transport for London’s partnership with developer Grainger, to be given the green light in the past year.

The first, also designed by Assael, was a 460-home scheme consisting of five blocks on a railway site next to Southall station currently being used for storage by Crossrail.

The others are a 162-home scheme designed by Maccreanor Lavington for a site next to Arnos Grove station, a 139-home scheme in Lambeth designed by Hawkins Brown which will also provide 2,700sq m of workspace, and a scheme at Cockfosters due to be lodged with planners soon which the developer says will provide hundreds of new homes.