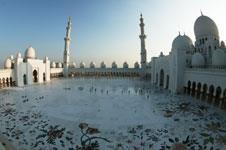 Conceived in the 1980s, this beautiful building is nearing completion, and several British firms helped create it

By the time the 3bn dirham (£578m) Grand Mosque in Abu Dhabi is finished later this year – although considering the project was conceived in the mid-1980s the completion date has shifted around somewhat – British involvement in the job will have been extensive.

The mosque was the brainchild of the UAE’s founder Sheik Zayed, who was buried at the mosque following his death in November 2004. Consultant Halcrow was brought in back in 2001 to replace the curious appointment of a Belgian firm whose expertise was more in desalination plants and power stations. Halcrow was initially asked to supervise the concrete structure and has been on it ever since.

It is currently carrying out mechanical, electrical and plumbing commissioning. The firm’s man in charge of the project, regional director Sami Al-Qazzaz, says the scheme has helped him see things in a different way. “I came on as an engineer with a background in bridges,” he says, “and I’ll leave as an architect.”

He was there when two other British names were asked to add their creative input to a building that began accepting its first worshippers at the end of 2007. They will have noticed the work carried out by Edinburgh-based lighting architect Speirs and Major, which has also been working on the Burj Dubai.

And Royal College of Art graduate Kevin Dean is the watercolour artist who helped create the floral design of the floor of the mosque’s courtyard and entrance to the main prayer room. He has also helped design other large floors and archways in the mosque in collaboration with Milan architect, Spatium.

In fact, the mosque has a truly international feel to it. The original designer was the Syrian architect Yousef Abdelky, while the first phase of construction was carried out by Italian pairing, Impregilo and Rezzini de Echer. A joint venture between Belgian builder Six and local firm Arabian Construction Company took over phase two.

The marble has been hued from Macedonia and crafted in Greece and China while one of the most stunning elements of the mosque, a huge woollen carpet, was handmade in Iran. The carpet measures 150 m by 50 m and is so big it had to be ferried in four pieces.

Enabling works and a 400 space underground car park are due to be completed later this year when Halcrow finally hopes to be off the job. Asked whether the delays have bothered him, Al-Qazzaz, born in Britain to a Welsh mother and Iraqi father, has a neat reply. “Well,” he says, “it’s given everybody the chance to have their say and add their own little bits over the years.”

Watch a video about building the mosque