Balfour and Multiplex vie for One Nine Elms 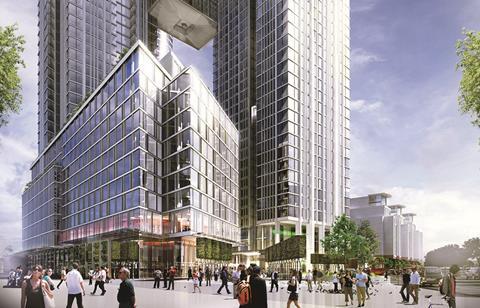 Balfour Beatty and Brookfield Multiplex are in the running to replace an Interserve and Chinese contractor joint venture on Dalian Wanda’s £900m One Nine Elms double tower scheme.

A source close to the project, expected to cost between £700m and £900m, said the Interserve and China State Construction Engineering Corporation (CSCEC) joint venture had not finalised the deal to build the project and now Balfour Beatty and Brookfield Multiplex were tendering for the job. It is not thought bidders will be expected to partner with a Chinese contractor.

Balfour Beatty is already working on One Nine Elms doing the substructure work, according to the source, while Brookfield Multiplex is working on a Dalian Wanda development on Australia’s Gold Coast.

One Nine Elms comprises a pair of towers at 45 and 60 storeys in height, incorporating 439 homes and a five-star hotel. The wider Nine Elms area will also become the new home of the US Embassy.

Dalian Wanda - which trades as Wanda One in the UK - picked the Interserve joint venture to deliver its KPF-designed scheme last April. But after slow progress on the scheme it began considering hiring another contractor.

The joint venture - trading as CI-ONE - surprised the market when it pipped rival shortlisted bidders Mace and a separate CSCEC joint venture with Atkins for the job. Dalian Wanda’s UK development director Peter Amato left a month later, in a move Building revealed was understood partly to be prompted by the decision not to pick Mace for the job.

Wanda One and Brookfield Multiplex declined to comment. Interserve said it will issue a statement shortly. Balfour Beatty has been contacted for comment.