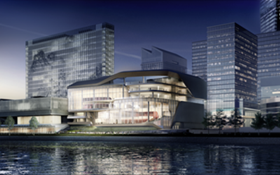 Balfour Beatty’s joint venture in the Far East has won two contracts worth a combined £705m.

Gammon Construction has been awarded a £568m deal to build the Kai Tak West Section of the Central Kowloon route.

The section forms a part of the 4.7-km long dual three-lane Central Kowloon route. Works will involve building a 370m-long underwater tunnel and the associated temporary reclamation in Kowloon Bay of about three hectares.

It will also build a tunnel in Ma Tau, as well as a 125m long road and 170m long underpass in the Kai Tak Development.

Work is due to start early this year with completion scheduled for 2025. A workforce of 400 will be employed at construction peak.

The second contract is a £137m deal for the West Kowloon Cultural District Authority for works on the Lyric Theatre Complex (pictured).

This involves excavation followed by the construction of a two-level reinforced concrete structure, public infrastructure works including drainage and a traffic lay-by. Gammon is currently delivering the foundation works for the project.

Work is due to begin early this year and is expected to be “substantially complete” by mid-2020. A workforce of 450 will be employed at construction peak.

Gammon Construction is headquartered in Hong Kong and is a 50:50 joint venture between Balfour Beatty and Asian-based conglomerate Jardine Matheson, running since 2004.