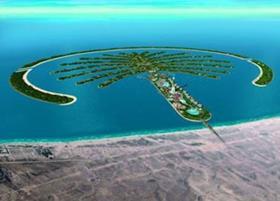 Balfour Beatty has abandoned its long-term strategy of diversifying into a global construction and professional services company, analysts said this week, after the firm’s surprise announcement that it is considering selling consultant Parsons Brinckerhoff.

Balfour Beatty shocked the City on Tuesday (6 May) with the move to put Parsons Brinckerhoff up for sale, which it bought for £380m in 2009, along with the news of the immediate resignation of group chief executive Andrew McNaughton, after only 13 months in the post.

McNaughton is to be replaced on an interim basis by executive chair Steve Marshall (see box below). The news, which was interpreted by analysts as a major shift in strategic direction for the £10bn-turnover construction giant, came alongside a fresh £30m profit warning, which was the result of a forecast profit shortfall in its £2.8bn turnover UK construction business.

This followed a £50m profit warning in April 2013, with the firm’s pre-tax profit ultimately falling £60m short of expectations in the year to 31 December 2013, largely due to under-performance in the UK construction business.

But it was the announcement that the firm will “evaluate options for the possible sale” of Parsons Brinckerhoff that most surprised the City, with analysts saying it indicated the firm was abandoning its long-term strategy of diversifying into a global construction and professional services company - and could even see the firm become an acquisition target.

Balfour Beatty said the move was the result of a previously unannounced strategic review, and a sale would enable it to refocus on its core UK and US construction markets as well as its investment portfolio.

Balfour Beatty’s share price fell 20% after the announcement and had not recovered as Building went to press on Wednesday (7 May).

Responding to the news, Kevin Cammack, analyst at Cenkos, said the potential sale of Parsons Brinkerhoff was a “panic measure” that represented an abandonment of the strategy developed under former chief executive Ian Tyler, which was taken on by McNaughton after he succeeded Tyler in March 2013.

“Balfour Beatty is chucking out five years of its previous strategy to penetrate higher growth markets driven by professional services, following a strategic review that we weren’t told was happening, in order to focus on becoming an Anglo-US contractor,” said Cammack.

“If anything, Parsons Brinckerhoff has been the shining star of the business. [Selling it] is a retrograde step that means any hope of raising the group profit margin has been lost.”

Stephen Rawlinson, an analyst at Whitman Howard, said Balfour Beatty had “effectively abandoned [its strategy] as it did not work in three of the worst years in the construction sector’s history”.

He said the move to sell Parsons Brinkerhoff could make Balfour Beatty itself an acquisition target.

“It may be that the company gets into the target sights of a bidder.To outsiders it may be that a US or a continental European entity may see value in the business,” said Rawlinson.

Other City sources said it was unlikely any UK firms would be large enough to consider buying Balfour Beatty, but it could become a target for Chinese contractors looking to set up in the UK.

One rival contractor chief executive said: “I’m sure Balfour Beatty would be open to an approach at the moment, it would make complete sense. Selling Parsons Brinckerhoff could make it more digestible.

“But it is still such a big beast that there’s not a huge long list of potential buyers for it.”

Balfour Beatty managers told analysts this week that Balfour Beatty expected to recoup more than $900m (£530m) from selling Parsons Brinkerhoff, considerably more than the $626m (£380m) it paid for it in 2009.

Speculation over possible purchasers of the business has centred on international engineering-led multi-disciplinary consultants such as Aecom, Jacobs and Arcadis, while UK consultant Atkins is understood to have run the rule over the firm last time it was for sale. 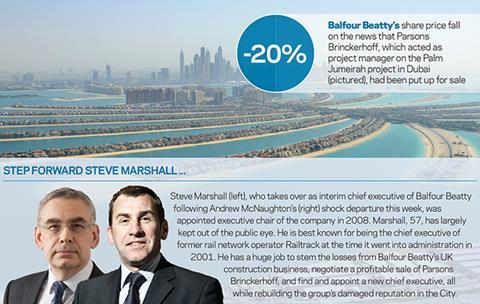 April 2012  Balfour Beatty announces plans for a major restructure of its UK construction business as part of a drive to realise £50m in annual efficiency savings.

March 2013  Firm’s full-year results see its global construction business post an operating loss of £37m, with revenue in the UK falling 6% to £3.18bn. Andrew McNaughton takes over as chief executive.

August 2013  The firm’s half-year results show an operating loss of £41m for the period, largely due to problems in the UK construction business, where profit was £45m short of expectations.

May 2014 Firm issues fresh £30m profit warning, as well announcing departure of group chief executive Andrew McNaughton and intention to put Parsons Brinkerhoff up for sale to refocus on US and UK construction business.